Blue Skies Above Us
Just here to have fun
Music The Great Age of Enlightenment?
Post
Cancel

The Great Age of Enlightenment?

This was going be another “Comps!” post. But then after transferring the other comp (the Placebo comp) I discovered that I already had it on my computer, because I’d downloaded it elsewhere. I was going to be like, check it out two comps with reversal of man! But, as it is, here’s one comp with Reversal of Man. All bands in total: 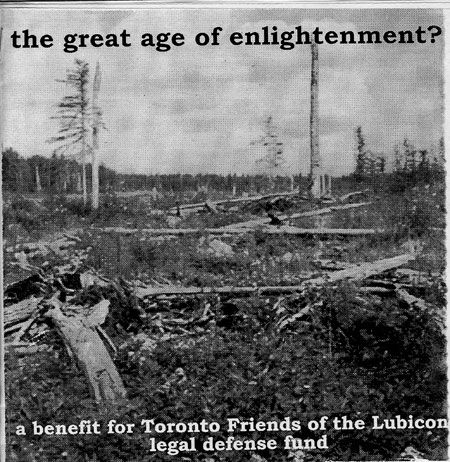 Noisome Faugh sounds a lot like Enewetak. I’d classify this compilation as thrash/power violence. ROM is rocking my socks lately. The song on this, Theory of La Masastra (totally misspelled on the discography download), is also found on the “discography” download (CD?) that’s out there… it’s not really a discography, since it doesn’t include This is Medicine and Revolution Summer. You know, as we all know they got their name from the Frail song Love, but until I really gave that discog a few good listens, I wasn’t seeing too much resemblance between the two music-wise. And now that I have seen it, I think it rules, because both Frail and Reversal of Man are righteous bands.

Racetraitor – this is the first song I’ve heard by them. I’ve read interviews with them, but just hadn’t came across any songs. Their song on this is way different than I was expecting. I was obviously jumping to the easy assumption that they had some kind of hardline-ish superchugga deal going on. But instead they are muddy and gross (in a good way!) and pounding, and sound sort of like freaking Usurp Synapse! Who knew?

I can’t thank you enough for putting this up here….

I have the hinckley 7”. I bought it on ebay and it diden’t come with any lyrics or inserts. Does anyone have a scan of those?

Behold A Pale Horse was a band from North Carolina with African-American members. They weren’t around too long and didn’t put anything out, so I never heard them, but I met two different members, Alex and Carlton, at different times in the late 90s.

The Racetraitor song on this record is the only song from anywhere near this early in their career. The later stuff, which was released as a split with Burn It Down and as an EP called “Burn The Idol Of The White Messiah,” had Andy Hurley (now of Fall Out Boy) on drums, and was much more polished than this track, but still very grind/death-metal influenced, heavy and grungy. For something more like this, locate the 7” by Hinckley, a pre-Race Traitor band featuring Dan and Brent from RT.

Finally, the Reversal Of Man discography CD was actually considered a discography-so-far and came out at the same time as “Revolution Summer,” therefore predates that EP slightly, and predates “This Is Medicine” and the split with Combat Wounded Veteran by a significant amount of time. The big change in their sound between the earlier stuff on the Discography CD and the post-Discography recordings was caused by significant lineup changes. The first time I heard Reversal Of Man was on their first 7”, and my first thought was “God, it’s like Frail with blast beats.”

Does anyone know about the band “behold the pale horse”? They mention them in the interview.

Excellent. Yeah, it felt like a pretty good find. (I bought it for $1 at a record store last month….)

Thank you so much for posting this. I’ve been losing eBay auctions on this thing for years now. Trying to hear this early Racetraitor material forever now.