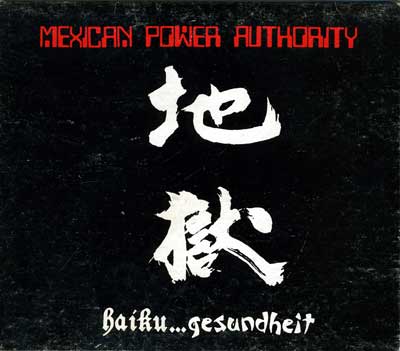 My typing fingers are a bit tired after adding all 116 song titles from this CD, so this will be short. Of course, a short message would be appropriate for this band – ‘cuz they mostly play really short songs. Mexican Power Authority were from the giant country of Canada, and were around from 1991-1997. This CD compiles a number of releases into one: More Discipline (cassette, from 1991, Break Even Records); Salmon Mask Mctallica (cassette, from 1992, Break Even Records); Haiku… Gesundheit (1992, cassette, Break Even); and the January Sessions (7″). This CD was put out by Ragamuffin Soldier Records.

It’s a bit hard to classify them, as they have a lot of range.

The ‘zine Short Fast + Loud describes them as such:

MPA remain one of the least understood and most underrated bands from the ‘90s underground. Their style was entirely unique, borrowing from hardcore and grind, yet adding so many off the wall elements that the end results never quite equated with their contemporaries. Imagine Muppets who studied free form jazz playing punk rock songs with the RUINS at a high school music recital with students playing recorders. Odd clarinet sounds and yipping vox offset the spastic punkiness that abounds. Kev from the almighty NEOS is in this band, but don’t go expecting straight forward thrash. Maybe someday MPA will get the recognition they deserve, but for now check out this cult favorite if you want something completely beyond the radar.

Songs average around 30 seconds in length. There’s a swell mix of trash, rock, grind, and even, toward the end, some jazz grind with clarinet. Topics are light, and sort of humorous. A few songs reference popular rock songs within them. Some of the tracks on this are doubled up, since CDs don’t allow more than 99 tracks.

I find this to be catchy and fun to listen to. It can be a lot to take in at once.

Totally notable is the fact that they recently got back together and played shows, and are now working on new material. Stay up to date via their myspace page. And it looks like they have a double lp version of this CD still available.

side note: I added a plugin for the archives of this blog. Now they are easier to browse – browse by title of post (which is always the band(s)), and view them all without much scrolling.

Another side note, even less related to the MPA post: My housemate and I launched our new website the other day. portlandpinballmap.com

Last spring I created a google map to keep track of all the pinball machines in the city. It went well, and we had a lot of data on it, and lots of friends and strangers helped keep it up to date. My h-mate/business partner (Sassy Moves Today) and I had dreams of turning it into a bigger site, with search functions and other neat features. So we’ve spent the last many months working on just such a site. Scott did all the perl and javascript and all that tough technical stuff. I was mostly just in charge of data, but I ended up doing (plenty of)  the text, html, css, and images (which is why the site appears as simple/awesome as it does).

So, if you live in Portland and like pinball (which I realize probably amounts to like two to three readers of this music blog), I hope you check it out and I hope you like it! I think it’s rad.