I don’t know why, but this seven inch isn’t listed on the Jihad discography. 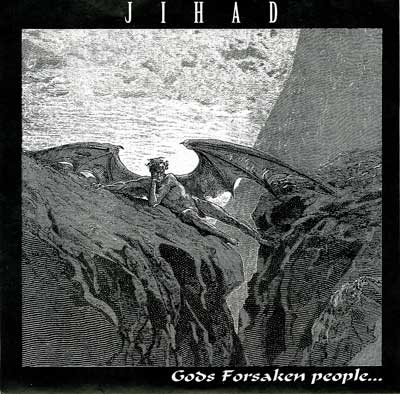 So I suppose I should make sure everyone has it. This is, actually, the only Jihad record I have (except for the HaC #10 comp). I really can’t believe I don’t have more, because they rule.

Jihad was from Kalamazoo, Michigan. They were around from 1994-1997, and this seven inch was recorded in early 1995, and I’m guessing it came out that year, too. I think one of the members ran Makoto Records (can anyone verify?). Makoto released, among other things, the Crush Kill Destroy CD. I had wanted to post that CD next, but it turns out my rip has a few glitches. And a few missing songs. So next time I visit my parents I’ll rip it again. It’s a good CD. 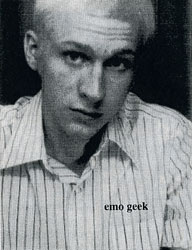 Anyway! I remember buying this record, flipping through the booklet and seeing this Emo Geek photo of the singer, and thinking, oh jeez wot did I just bye? Turns out I was an ignorant fudge; at the time I had only the slightest idea of what constituted emo. This booklet, by the way, comes with lyrics, photos, and thoughts written by the band members. And it’s included in the zip.

The most obvious descriptor for this band is BASS (the instrument, not the fish). It is so freaking bass-heavy. Pummeling bass, chugging guitar, beastly drumming, brutal, hair-wrenching screams. I love this record. Enjoy.

Is it possible for Jihad disco. to be uploaded again. Thanks.

makoto released good shit when the label first started in the mid 90s (wallside, shag van club, gondolier, jaks, quixote ect) but they started releasing garbage around 2000 or so….i think that tristeza cd/lp was the last good thing they released……..joel was pretty nice the few times i talked to him at shows, but it seems he couldent run the label worth shit……aside from that series of split”7s he was also supposed to release records by craw, my lai and a couplke other bands i cant remember right now…….not sure why those never saw the light of day………

Vac: Thanks for the info. If Makoto folded, do you think it’s alright to post the first Crush Kill Destroy album? It looks like it’s being sold all over the place (with near to no ratings accompanying the sales), and the band’s website gives away a few tracks (which makes me hesitant to just up it for free for all. But it’s good, and I think more people should hear it.

A few things on Wick and Makoto:

Joel Wick ran Makoto records. He was also booked and arranged for shows in Kalamazoo, including a Black Heart Procession show that was one of the best shows I’ve ever seen. Jihad was long gone while I was there for college in 1999-2004, but I never liked their music much anyway. Makoto records folded just as they were starting to put out the first few records of a prepaid subscription 7” series. People who paid for the series never got most of their records, or their money, from what I know. Apparently, the record company wasn’t well managed and used credit at the pressing plant to put out records instead of paying for them up front like most small labels. I think that’s what did the label in. The only records I liked much on the label were the two Thoughts of Ionesco albums.

Joel Wick has a new band called MESA. Fucking killer if you ask me. I saw them. myspace.com/mesakzoo - you may dig. More on the heavy stoner-rock side or something. JIHAD killed!

here you go, between the 7” you posted and the split with ottawa you have all the studio tracks, but really, it’s the live tracks that pushes this from amazing to fan-fucking-tastic. enjoy. http://www.mediafire.com/?gzx0zexl4cm

Yes! It’s still up, and I’m getting it now. Thanks a lot. And I would most definitely take advantage of you putting up Old Testament. I am ready to have my mind destroyed by the War Machine!

i’m pretty sure the ottawa/jihad split is still up on my blog if you need some more jihad in your life. also i could up the old testament cd sometime tomorrow when i get the chance if you’d like. if for anything else the fucking wicked live version of war machine to destroy your mind.

Sapila: Ah, yeah, I remember that CD. It seemed to disappear fast, so I wasn’t able to pick it up. I shall look for it, because I really need to hear more Jihad.

Here’s Instant Orange. It’s psych rock stuff from the late ’60s/early ’70s. They have some Byrds-like tunes. I think it’s really good. You I’ll be Following is a great song. Same as Genesis 2, Skyline, etc. Lot of songs on that album. I made an Instant Orange ringtone last week. Check it on the ringtone page. It’s pretty classy.

I tend to play music when going to sleep, and so I end up putting some major repeats on last.fm. And I often listen to mellower stuff when falling asleep, which is why I have so many plays of Gravenhurst, Feathers, and such.

Tell me if that link doesn’t work.

Their bassist is Joel Wick (who also played in Sealucky & Quixote), who also ran Makoto. I was told that he ripped a lot of people off with that split 7” series he didn’t release.

There’s a Jihad CD on Makoto called Old Testament (released at the same time this 7” was released), which is a compilation of everything they recorded but the song on the Longbow Project comp and the New Testament 7”, maybe another comp, and some songs from the Ottawa split which were re-recorded for other records.

I love this record.

Is Instant Orange any good?

It’s a great way to start the day!

I started today listening to the Three Studies for a Crucifixion/Harriet the Spy split, the Harum Scarum - Mental Health album, and the Makara 7”. Go daily commute!

nothing like liquifying your brains before noon with chaotic spastic hardcore.