I saw Countervail many times at the pickle patch. They were from Ventura, about 30 minutes south of Goleta, so they came up a lot. I always looked forward to seeing them. What I remember from the shows was the singer screaming his bones off with his head between his knees, accompanied by a relentless, pummeling wall of sound. They sort of looked tuff, but the music wasn’t at all your standard straight edge chugga stuff. Well, they could certainly chug, and there are some breakdowns, but they took more influence from Rorschach and One-Eyed God Prophecy (and, in terms of steady, driving hardcore, from OEGP’s later incarnation, The Black Hand). 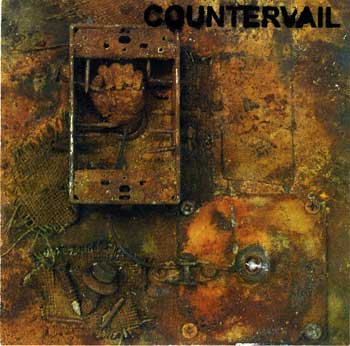 The CD-ep is called An Empty Hand for a Heart. It came out on Phyte Records in 1998. Four songs.

thanks i really love this music cheers!

I swear these guys had an ep on Status Recordings, or at least they were selling it a few years ago. I think I sent them the money and I never got the damn cd. So this works for me. Thanks!

Ah, if it wasn’t too close to OEGP I’m not too worried. Thanks a lot for the quick reply.

Sam, I looked through my records, and I don’t have the 10” anymore. But it could be at my parents’ house. But maybe not - I got rid of some stuff last year, because I was poor, and had too many records that I wasn’t so into. Hopefully you’ll get a chance to hear them. Rest assured, though, that they aren’t too similar to OEGP. It was good and all, but what I remember is that all the songs were pretty similar to one another, with the same driving beat that seemed to go on forever. I felt like I had the gist of it after a few listens. I saw them live and it was only so-so. I liked them better on record.

Would it be possible for you to post some of The Black Hand’s material? I’m a huge OEGP fan and I’ve been searching for similar bands.

I also have a double seven inch, which includes a few techno remixes of their songs (at least, I’m pretty sure I still have it; I need to check). And, according to their page on New Age Records, they put out an ep before this, and later released a full length (I haven’t heard either, but I think they’d definitely be worth checking out).

And yeah, I probably should have also posted the band photo that’s on the back of the insert.

Wow, this is g-r-e-a-t! Wasn’t what I was expecting by looking at the cover - love that! Do you know if they released anything else, or what bands they may have morphed into?