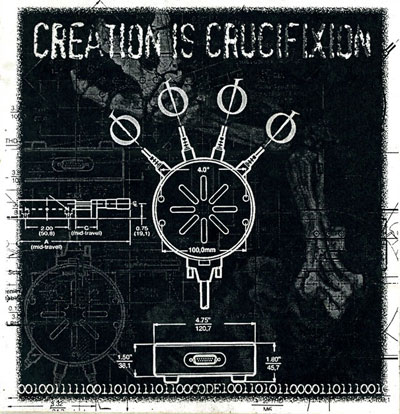 I first encountered these guys at the second Goleta Fest, in 1998 (I think?). They were touring with Suicide Nation. Incidentally, the day before they played I was given the In Silico album/CD-ROM to review for Heartattack, so I had a brief moment to prepare.

Here are my vague recollections of the show: both guitarists had the straps on their guitars set very tightly, so that the guitars were almost chest-high. Their left hands were basically spider-crawling all around the fretboards throughout each song (aka way technical playing). There was about a five minute break between each song, during which the singer, Nathan, and guitarist, Paul, would discuss things like artificial intelligence, and computers, and how soon the human brain will be binarily coded, and how nanotechnology will be able to physiologically manipulate and control us, how the human is being deprecated and soon AI will have control of the world. Nathan was at the time attending Carnegie Mellon (as an art student, I believe), and Paul was working for a company that made super computers. They both had a lot of first-hand knowledge, and their presentation of it, coupled with this dark, fast, noisy, caustic, and deathly music, made for quite an intense and gloomy situation. I remember being seriously scared and anxious during the show.

For some more detailed insight into their ideas, read this interview with Ray Kurzweil – “that singularity guy”.

From their liner notes, it seems that they recognize the irony in their music: by constructing songs, recording them, and distributing them, they’ve essentially coded themselves, thus setting up a structure that can be deconstructed and devoured; a methodology they detest and warn against throughout their music. Their songs frequently repeat the fatalistic notion that “they are coded.” The singularity is inevitable.

They formed in 1997, and were mostly active until 2003 or so (but not totally inactive after that). They were based around Pittsburgh. But I believe they relocated to San Francisco in 2000 or so. I wanted to interview them once for Heartattack… but they basically disagreed, and said they’d submit a manifesto instead. But it didn’t happen.

They are quite metallic and brutal and noisy (techcore!). The vocals are somewhat like Rorschach (Protestant-era), and the recordings are, in general, a bit on the muddled side (which I love, of course).

So, I separated all the records into separate zip files, so it’s not one ginormous download. And so you don’t have to get anything you already have. As seen from the discography on their site, this isn’t everything. However, it’s a lot. The only 7″ missing is the split with Fate of Icarus. (I used to have the split 7″ with Unruh, but I can’t find it! But I had it downloaded, so I’m including that file, too, for the sake of convenience.)

In Silico is a full length. 19 tracks. Every other song is a short noise track. The day after their show, I told Nathan how much I liked the album. I remember him being concerned that the noise tracks would turn people off. But I assured him they wouldn’t/shouldn’t. They are short, never long enough to bog you down, and they serve as nice interludes between the songs. As mentioned above, this CD is a CD-ROM… but, you obviously don’t get that with the download.

The Automata ep is a 12″. But there are a lot of noise and misc. tracks on it (some not found on the CD version). There are only four musical numbers. The beginning of side b wins my heart.

The split 7″ with Suicide Nation is a favorite record of mine. Suicide Nation blew me away at Goleta Fest. They were super intense and emotional, and I think this is one of their better songs. CIC’s song contains a soft/gentle part in the middle that’s overlayed with samples from Texas Chainsaw Massacre – pretty creepy!

“All our songs are about cyborgs!” Nice drummer shots in this vid.

The Descent from Heaven 7″ is a one-sided record (but the second side has grooves…. but they don’t produce any sound. It’s odd.) I remember one of the members telling me something about this – something like it being demo material. This stuff is definitely more raw than their later songs. In fact, I don’t think there’s much distance between this and, say, Usurp Synapse.

The Child As Audience CD (“Where Technology and Anarchy Fuck”) comes with a guide for hacking Game Boy games, to make them educational. It’s part of the Hactivist Tactical Media Network. I didn’t scan the booklet. It’s huge, and in a lot of languages. But it’s very interesting. CIC was/is an integral part of the Hactivist network, so I recommend scoping that link for a deeper idea of what they were about. Or… check out this pdf I just scanned.

I think the drummer plays in Cattle Decapitation now. um, this blog says that one of the members went on to be in Fall Out Boy….??

These were put out by Cyberdine243, Willowtip, and King of the Monsters.

The old link is dead.

This new link contains the credits of where there files came from, as well is more complete. It does contain doubles, and no longer contains my personal CD rips, however it does contain one track I ripped from CIC/Faith of Icarus 7”. It is still missing the ‘Antennacle/Bastard Noise’ split, https://myspace.com/antennacle . But does contain the ‘Antennacle – we will remain’. It’s the best I got so far. I wish CIC would come around with the official masters so people could DIY release their work. Seeing as they are not releasing new copies of their work, I feel like this was a band that is getting lost in the data… This is why I am so grateful of this and similar blogs. In no way do I mean to rip off CIC, I simply want to help to get their message across. http://www.mediafire.com/download/76m109dro59ax3d/CIC_(18.7.14__password_CIC).zip The password is CIC, As well from a similar ere, don’t miss out on http://maharahj.bandcamp.com/

I have also collected as much as i could. I have the complete set of Brian, as well as some other versions (and some of the other tracks from the splits) that I found on the net and have ripped myself.

IMO this is not an archive set, most of the files are ripped ad 192kbs and some of the CD’s (in silco and automata) I’ve ripped were at lower 128kbs quality. unfortunately I am not in possession of these CD’s. It is missing this one version. http://www.discogs.com/Creation-Is-Crucifixion-Rerecorded-Tracks-From-The-Vinyl-Splits/release/395395

Once i finally get my life together, I’ll be hitting up discogs and rips everything to flac. Please reply to for an update.

Yeah, back in the day, 128kbs was sufficient (especially because our download speeds were so slow). Then 192kbs was good - and that’s what I ripped most of the stuff on this blog as). But now if you’re not ripping at 256kbs and higher, you’re a lame-o.

I never ripped as flac because I was self-hosting all the zips. The zips were big enough as is, and I didn’t know if my host was going to complain. I didn’t want to bother with links ever going down, so I didn’t use services like mediafire. But if I had been using them, I probably would have ripped flac versions.

I have the Antenna Builder EP if anybody wants that, I guess it was unreleased or whatever, but it’s really good.

Thanks so much for doing this! I used to have a few of their CD’s in the early 2000’s…It was some of my favorite stuff as it was super-techy & discordantly heavy, yet had this weird, punk, DIY vibe. And the intellectual slant to the lyrics and ideology was intriguing, if not something I totally grasped at the time. After reading about the singularity and a lot of other topics their lyrics deal with since then, I have even more appreciation for how ahead of their time they were.

Thank you so much. I couldn’t find any torrents of these and my records were damaged

cic guitarist is or was in zao.

So I uploaded their ENTIRE discography, hope everyone enjoys, it took me nearly 10 years to get everything. A HUGE thank you to robotic obscurities for completing my collection!

I have all the 7 songs that were re-recorded for the split, the Radio Bronka pirate radio broadcast cdr and the uum/CIC noise split 3 inch cd if anyone wants me to upload, my email is iamluxaeterna@yahoo.com

Radical! Thanks RE. I’m looking forward to it.

Thanks for doing this.

THANK YOU!!!!!! all my cds were stolen a couple years ago including my cic so this is the best thing i could have found.

Seriously; this is fucking insane that you did this. Thank you.

Thanks a lot for these, and for the good read :)

↪︎ Reply to Leo The Seasoned Downloader
Founded 2005. Over the years I've posted writing, comics, ringtones, and stuff about maps, bikes, programming, pinball. And I had a robust music blog mostly about '90s hardcore punk (category = music).
Other music posts