Named after Boba Fett’s unique starship, Slave One originated in the far-reaches of Fort Worth, Texas, and played piercing, crushing metal-fueled hardcore from 1996-1999. This post contains their 7″ (on Highwater 1997, I think), the split lp with Meadowlark (split release on Make a Difference and Sixgunlover, 1998), and their lp (Redwood, 1998). 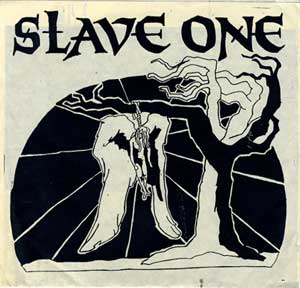 As you’ll notice, the 7″ contains two songs that are later re-recorded and released on the lp. You’ll also notice that the vocals on this are different than on the later records. Personally, I’m more into these vocals – they seem to reveal a bit more emotion, and it’s a little easier to discern the lyrics. Later on, they became harsher and more brutal, a la His Hero Is Gone.

One of my favorite things about this band is how well they build up and then slice into the fast parts. They also, while not being a total metal band, certainly put in a few Slayer-esque (a la South of Heaven) riffs. At least, that’s how I see it. 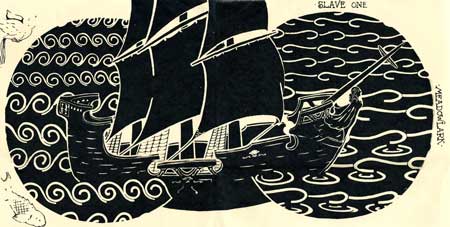 The split with Meadowlark contains two songs by Slave One, and three by Meadowlark (included here, of course). A friend taped the Meadowlark 7″ for me, and I liked it. I don’t have that tape anymore. I think I’m more into the 7″ than their side on this record. Even today, each time it looks like rain, I like to say outloud to whomever’s next to me, “A storm is coming. Our storm. And when it arrives it will shake the universe.” The Slave One songs on this split are great! 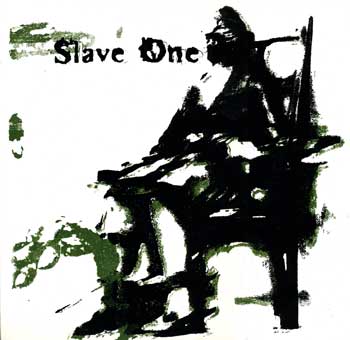 Finally, the lp is solid. Bits of chaos, great drumming, plenty of crushing metal (as mentioned in the first sentence), slick riffs, songs about love and loss. Enjoy!

Wow old ass thread here. I was a HUGE Slave One fan when I was 16, hauled gear to get into shows, all that. Glad to find all their recorded work here posted.

Wild, my pal Patrick in Ft. Worth had a Slave One patch and I remember being at a couple of parties at Brian’s (Green?) house on Berry St. but never heard them til now. Some ruling-ass rippers for sure. Thanks for posting.

this was always one of those bands id heard about or saw ads for their records in heartattack but never really bothered checking out….really good stuff

Here’s the Slave One Full Circle 7”, if anyone hadn’t found it.

I just borrowed Nathan’s copy of “Tactics Of The Lie”. Cool how you can hear his guitar playing transfer from SOP to Slave One etc. He’s got a really unique style. If you haven’t yet, check out World Burns To Death and Severed Head Of State. Some of Jack’s (SOP Vocals) bands after Scorched Earth Policy.

No problem man. If you email me your snail mail addy I’ll send you a Caddis CD if you’re interested.

Ben, I got a bunch of Garuda from a guy in Portland who read this post and said I should check it out. But I’m lame and still need to give it a proper listen. I’ve been meaning to free up space on my pod so that I can add new stuff… it’s totally full. I seem to mostly listen to music while riding on the bus.

thanks for all the info!

Slave One was from Fort Worth. I know it’s all one big area, but if you’re from here there’s a big difference. Brian (vox), Brian (Bass), and David (Drums) went on to form Garuda around 1999 - 2000. If you haven’t heard them CHECK THEM OUT IMMEDIATELY. They released one 6 - song EP called “Cold Wired Sentiment” and it is fucking great stuff. They broke up several years ago, but have recently started practicing again now that everyone’s back in the same area.

I’m playing bass in a band called Caddis now with Matt and Nathan (Slave One guitars). Nathan used to play in a band called Scorched Earth Policy before Slave One started, so that might be where the “Policy’ thing came from.

Anyway, fucking loved Slave One. Good people, and I thought y’all would like to know they’re all still playing music.

Thanks for posting the link. I’m going to copy/paste it to www.dallashardcore.com as well so some of the younger people can check it out.

Yeah I’m about to d/l that Meadowlark. I too had to give their side of the Slave One split a few spins in order for it to stick…but it sorta all makes sense to me now. The last song starts off real HEAVY (whilst keeping an interesting time sig…) and then breaks into their noisy, dissonant, emotive, spastic chaos…very nice.

Can’t wait to hear the 7”. I’ll also be sure to check out Garuda…

If I end up ripping the SLave One 7” (which I will, eventually)…would you want a copy for the hard drive?

Thanks for the feedback, Genghis!

A reader (in portland) gave me some Garuda (post Slave One).. but I still need to give it a good listen. Yeah, I dig them. That 7” sounds like a nice find.

I recently picked up the Meadowlark 7” (mentioned in the post above). (I found that and the With Intent 7”!!) I’ll post that next. I think it’s good - better than their stuff on the split.

Ahhh I just got a 7” from them that, to my surprise, is not the one featured on here. It has two songs “Full Circle” and “Blurred Vision”. Crushing shit…very Rorschach’ish (esp. in the vocal delivery…and I mean an earlier, husky voiced C. Maggio).

P.S. this is easily one of my favorite blogs…more stuff like this, Countervail, Unruh, Enewetak…please!

animalsandchildren: Thanks for the info - it’s funny how out of hand false info can become.

these dudes were from Dallas. one of the bigger hardcore bands at the time, as far as metal goes down here.

not an earth crisis side project, no policy of three members (though that would be AWESOME)…

we released the seven inch on highwater…and my friend, Jason did the split LP. Gonna be doing a Meadowlark post here in a few days….check it out if you can..

Actually, they (Brian Waits, Nathan Morris, David Purcell, Brian Green, and Matt Thomas) were all from Fort Worth. They played Dallas a lot, and also Austin, Denton, Tyler, and Houston. But they would all claim 817 home.

Came across this site while looking for my favorite Slave One song, Eight Minute Madness. If anyone knows of any recorded copy, please share.

nice! i was just playing Star Wars Lego Trilogy 2 and the secret ship you can win is the Slave 1.

awesome game, awesome band name. will definitely check it out.

Yeah, the 7” is my favorite of theirs, too. Followed by their side of the split.

Oh, and they’re ex-Policy of Three.

i was wrong, Bobba Fett Youth were from Las Vegas. The reason i asked was, BFY had their name for awhile then were sued by lucasfilm to change their name, around the same time was when i started seeing slave one ads in the back of mrr. i still kind of want to hear the bfy though. hmmm. must see if i can find anything.

I don’t know. I’m guessing you’re wrong. But I could be wrong, too.

Here is their myspace. And I read somewhere a while ago that there was another Slave One, and they were a side project of earth crisis or something like that. Maybe it’s this Slave One? Seems unlikely to me, but what do I know..

thanks for this. am i wrong in thinking this band was at one time called Bobba Fett Youth?

Where can I get a copy of the cd