From the pallid, jangly melodies submerged within the final recordings of Honeywell there surfaced a more realized model of the members’ psychedelic, garage rock inclinations. Los Cincos, rooted in surf guitars and garage dirges, first came together in 1994, and, with a seemingly constant rotation of members (often just to different instruments), stuck together until 1999. 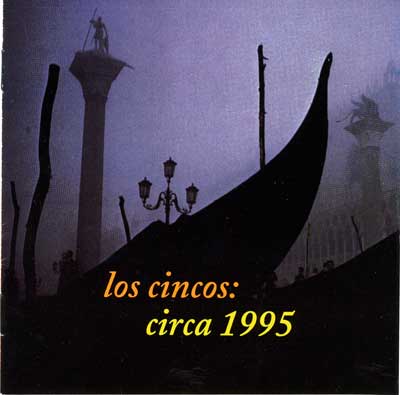 I have both the double 7 inch and the CD versions of the record displayed above. Here is the CD version for you all. The differences between the two are: The CD has two extra songs – “The Phantom Attack,” and “Marching with Mr. Mustard”; “Barbituates” has a couple more minutes added to it (starting after the backward warp-pipe); and “I am Victoria” has expanded from a modest 5 minutes to twenty two minutes (the extra time is spent in an extended jam, and then with various recordings, both audio and “field”). This record came out in 1998 on Sympathy for the Record Industry.

Also included in this post is this Japan-only release (on Horen, 1997) of a collaboration between Los Cincos and April March! 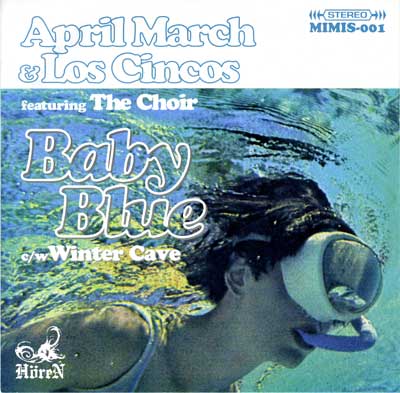 It’s a 7 inch. Two songs, both closely related to one another. “Baby Blue” begins with horns (making me, for a moment, think of Spoon’s latest… in all honesty), setting an up-beat, but laid-back beat to carry the record from sunny California beaches to “Winter Caves.” April March’s sharp vocals (as usual, sung in both English and French) pair up nicely with Los Cincos’ rich, twangy melodies and punctuated rhythms. The Choir backs up the two tracks with lush, but almost lo-fi harmonies that keep it from being too reminiscent of clean ’60s pop. Toward the end we feel the cave icing over, filtering out the sparkle – seasons never lasting and always repeating, until soon we are left with just a persistent mid-end buzz.

I might be able to upload that LP if you want it. I can’t be sure, but I’ll check if you’d like.

This blog is the best!!

They only pressed 300 copies of the Moss Icon/Silver Bearing record, so from the beginning it’s been difficult to get. Unless you get lucky enough to find one in a used record store, you won’t get it for cheap.

I’ll post the Reach Out/Honeywell split. The only other Honeywell record I have is their last 7”. But I can post the art for it, too.

Wow this is great!!! I really want to listen to Los Cinco,thanks for posting.

Please post the Reach Out/Honeywell 7” or any record of Honeywell,I need the artwork. Some days ago was sold in ebay the Reach Out/Honeywell 7”, but I haven’t got enougth money to take it and I really wan it. It happend the same with the split of Moss Icon/Silver Bearing,always is sold too expensive. But at least I win the Navio Forge 12” and that’s make me very happy (I’m waiting for it)