Thanks for the feedback, homies. And so here are three seven inches by Manumission. 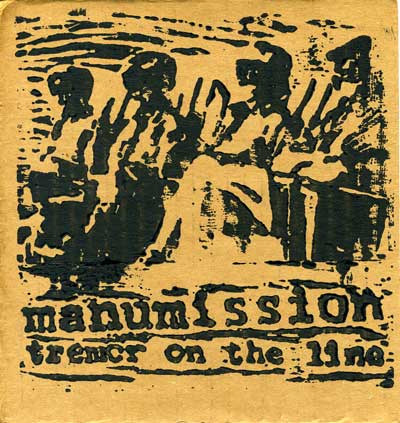 All of these came out in 1993 and 1994, I believe. Binary Lung was put out by Ebullition, Tremor on the Line by Repercussion, and Diego Rivera was a split release by Sovereignty and Ebullition. Manumission was from Goleta, California. Some of the members were attending UC Santa Barbara at the time. Jose (from Struggle, etc.) drummed for some of the songs, and I believe he lived in San Diego still. 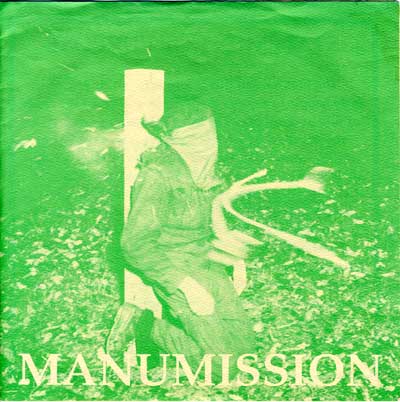 They are one of my all time favorite bands. I was too young to ever see them live. The Binary Lung seven inch was the first Ebullition record I ever bought, and it basically turned me on to the rest of the catalog. They profoundly changed my perception of hardcore. I poured over the insert of this record and discovered sincerity, politics, and emotion. Hardcore wasn’t just brutally fast music with a bunch of screaming. The last on this record, “Humanity,” ends with Ani speaking the lines he had been screaming in the last verse. At first, through my lense of irony, I thought it was sort of goofy. But then a friend stood up for it and declared it to be the best part of the record. I then reevaluated my perceptions of the music, and I took a real look at the words and the ways in which it is all presented, and I recognized that it was sincere and substantial and should be taken seriously. 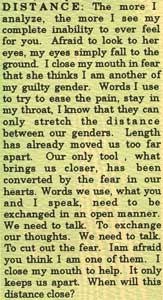 Manumission is a political band in many ways, but at the same time they are intensily personal. In high school I photocopied the lyrics of “Distance,” and had it tacked up on my wall. It seemed to perfectly capture my thoughts on relationships and gender.

There are somewhat disparate styles at play in their music. The drums are extremely fast, snappy, and tight; the guitar and bass are at times catchy and melodic, and during fast parts often played slower than the drums (or at least it sounds that way), but at the same time there can be some seriously crunch; the vocals are absolutely ravaged and brutal. All of it comes together for what I think is a unique interplay. They are tight, controlled, but also cathartic and blistering.

Check this song, “Guillotine,” off the Diego Rivera seven inch:

So, download it all, and enjoy! Geno from the comments recently posted the Manumission side of their split with Los Crudos, so I included that in the zip, too. All inserts are included, as well. The second side of Diego Rivera is live from a radio show. “Hawthorne Effect” is originally on the 3/12/93 compilation (which I have, but it seems to have a small scratch). 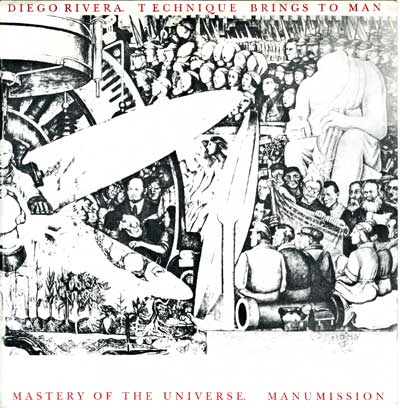 i thought i was the only one that remembered and liked this band! you rule for the post. you all rule for being old like me!

Ok, no problem … thanks for the answer.

Luis - I don’t have the PDF for the split with Los Crudos. I don’t own that record. I got the file from another blog, and they didn’t include the insert.

Ok, my english is poor … In this post, the PDF of the split with Los Crudos not is, it’s damaged … it would thank for much to you to share it (maybe in other post, wherever).

Good luck, and thanks for your space.

hey thanks you guys for the kind words about Manumission! I talk to Adam every now and then..he and seth are living in SD and have a new band that you can check out on the Indian Summer myspace profile. Downcast was simply amazing….those were great shows & records

“Humanity” is probably the best hardcore song ever, besides Downcast’s “De-Recognized.” I also asked Adam from Indian Summer, about that tape, and he told me it was never released. I found that odd, since I have three Repercussion ads mentioning that tape. Oh well.

Has anyone kept in touch with the singer?

Manumission’s Binary Lung was also my first Ebullition buy when I was a youngster. Makes me feel good to see this piece of work spoken of as highly as it deserves to be. To this day, the song ‘Humanity’ brings tears to my eyes.

hey Jack…I don’t think From Ashes Of ever did that tape. I remember asking Adam & Seth for it, they laughed & we kept eating our burritos

awww man! ryan, these last two posts are so sick!!!

oh hey, i saw your name as a contributor in an old HeartattaCk not long ago. haha! nice work!

I don’t have the tape. I’m sure somebody has it! Maybe they’ll read this and post it.

I was looking at the Tremor PDF and on the last insert is the catalog for Repercussion records and it says there was a From Ashes Of… 6 song tape? I thought they only did one song for the Ghost Dance 2x7”

Thanks for this music… these records are long lost from my collection. It’ll be awesome to hear them again!

Jose from Struggle was, indeed, one of Manumission’s drummers, but Bobby Czell (Honeywell/Los Cincos/Volume Eleven) played on that first 7” and the first records.

i can’t believe that this band still gets listened too! I’m positive kent McClard has boxes of the 1st 7”…..The rest are gone…but i do see them at Amoeba now and again. Shane, you’re right to a degree. I think the politics were good but the execution of those belief’s seemed to alienate alot of people. Looking back, it was a very very elitist scene and if you didn’t act accordingly, it was very easy to be dismissed as a band or even as an individual…..and that defeated the purpose. I got a little Holier Than Thou….

Thank you so much! I am going to rock out to this right away!

Nice! You should hear how bitter Jeff Capra is towards this era and the politics these days. haha

Really. You know him that well. I’ve never heard of you.