Here is the An American Tragedy compilation 7″. 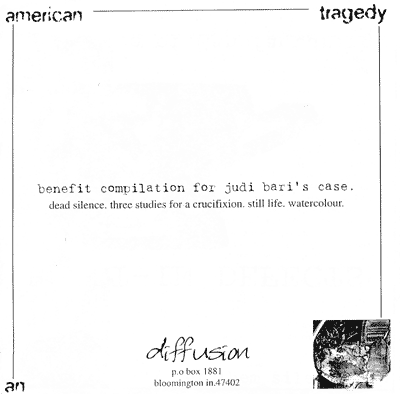 It was put out by Diffusion Records (Bloomington, Indiana) in 1996.

Dead Silence covers a song by a band called Dissent. I’m guessing it’s originally from the ’80s. It starts with, “Sometimes I get angry, but not in a selfish way.” And sometimes you play pretty catchy ’80s punk rock (which is also not a selfish thing)!

Then Three Studies for a Crucifixion arrives from planet Jupiter, but explodes mid-entry, and this is what we’re left with. And it rules. This song is also on the split 7″ with Harriet the Spy. Except this is a different recording of it. A better one! I recently posted this song on my tumblr. I love it! So then I figured I should post the rest of the record. Which is what I’m doing now. This comp had previously (about 3 years ago), been posted on another music blog. But they didn’t have the balls to keep the links alive. Which maybe means that this record is already common on the hip young music-sharing message boards you blokes “surf.” BUT! It wasn’t included in a zip that supposedly contained their comp tracks.

On that (side) note: here’s everything by Three Studies for a Crucifixion! It’s only their songs (not the other sides of the splits), and includes their stuff from: the split with harriet the spy, split with coleman, split with melt banana, four songs from comps, demo, live set. (Look, I used mediafire… they keep links up for a long time, right?) Thanks to Leo for for helping find these! And I got the demo from Killing Technology.

Edit: this discog is three tracks short! It’s missing three songs from the 49th Parallel compilation. My friend has that record, and I’ll be borrowing it soon, to complete the discog!

If you want the other sides of those splits, here’s: split with Coleman split with Harriet the Spy split with Melt Banana

Okay, back to this record. Side B has Still Life doing their best and slowest William Martyr 17 impression. har har, just kidding. But those bands do remind me of one another at times. Watercolour is good – melodic and decently-fast (similar to cap’n jazz or something).

This compilation is a benefit for the (now departed) political activist, Judi Bari. Her car was hit with a pipe bomb… and by whom? Insert included.

Coleman released a self titled 7 on heliotrope records, a split 12 with three studies, a track on the education comp( another version of the song -homage- is also on the self titled, a track on theinspirit comp, a track on the stealing the pocket comp they were also on the hardcore headroom comp, but that track is from the three studies comp. It’s kind of hard to find much info on coleman, so Im going to put a link of these songs, and an interview I found in an old heartattack issue -

Bryan: They released that split LP with Three Studies for a Crucifixion on Mountain Records that I posted above. And they have a song on a Mountain compilation (Education, maybe?).

Here is their last.fm page http://www.last.fm/music/Coleman But it doesn’t have a ton of info, nor a discography.

Does anyone have an info on that band Coleman? Where were they from? What else did they release?

Here they are..my long time roomie went on this tour with them said they were a bit beat by this show but you get the point. This about sums up my early adult years in Ohio. Organized Sports rulz! http://www.youtube.com/watch?v=Lo_F46jotUc&feature=related.

I came across some more three studies that I was not aware of, it’s a real raw recording.You can find it here:

Geno, yeah agree about the low recording on that split. I don’t have that record. But a friend of mine might. If so, I’ll re-rip it.

Three Studies! Just when you think you’ve heard it all, you com out with another great post!That 7” split with harriet the spy sounds like it was mastered too low. I thought i had all their releases until now with this comp, with a another version of operation dandelion . All those bands from columbus, ohio just sound so bleak, nema, three studies, inept.. These guys remind me of the next evolution of the sound rorschach had on their protestant lp. Except for that split with melt banana, where they sound more tech metal style