People liked the other Tem Eyos Ki stuff I posted, and Ricardo requested this split, so here you go: the Tem Eyos Ki and Hundred Years War split seven inch. 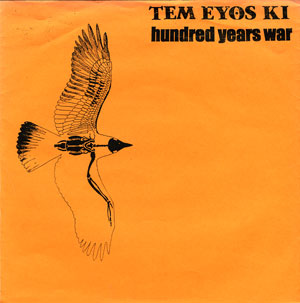 Harlan Records put this out, in 2000. Both bands feature members of all kinds of Little Rock bands. Hundred Years War is sort of ex-William Martyr 17. I’m not sure what else they put out, but it says they were together from 1996-1999, so I imagine this isn’t their entire output. This song on here is heavy and brooding, with vocals similar to Incurable Complaint.

Tem Eyos Ki is, as usual, fast and thrashy and metallic and epic. It looks like these songs were recorded around the same time as the tour CD I previously posted. There isn’t a gap between the two songs, so I kept them as one file.

Both bands cover the topics of identity and eating disorders. Lyrics and explanations are included in the insert (which is in the zip).

(p.s. I just moved, and my records were boxed, and so posting was slowed down for a bit. But now I hope to get a few things up per week.)

hundred years war put out an lp, but i really wasn’t into it, wish is a shame cuz i love their side of this…

This is not weird, I say. I’d love to transfer it and post it. And I live in the Alberta area, too! (I live by 16th and killingsworth.) You can bring it by my place if you want. or we can meet somewhere. email me at master.cob at gmail, and I’ll give you my address.

so this is possibly weird or possibly not - but my new houseguest/roommate owns the self titled temeoski 7”. we ourselves have no such methods of making said record available on the magical interwide web - if you’re interested in posting it though, we should figure that out - not sure where you are in portland but i live alberta-ish and i sure do have a bike. i’m probably not the only one who would be really excited to find it, especially since it has the annie mae song….

yeah! i sure do live in portland. … however i’m not allowed into a record store (or powell’s. or reading frenzy. or art media) unless i have at least $50 that i don’t need. yikes. it’s been awhile since i’ve gone digging in jackpot records though….

beastiebeastie: You’re welcome! Thanks for the thanks. I don’t have the self-titled 7”.

Are you in portland? If so, and if you like the black label/champions of the bleeding heart split I posted, jackpot records downtown has it for sale for like $2. It’s been there for months, and it’s good, and not common.

Thank you! Thank you! All the Tem Eyos Ki stuff is out of print, with the possible exception of the tour demo, which was a free download for awhile. Any chance you also have the self titled 7”? I had it years ago but it’s nowhere to be found these days. The Annie Mae song is one of my favorite songs of all time ever, and the only taped copy I have is just about dead.

FYI - Hundred Years War also put out a split 7” w/ Shere Khan (another AR band with members in tons of other bands, including Shutthefuckup!, That Thing That Always Explodes, Two Dean Crew - one of them performs solo now as David Dean’s Musical Forklift and has a DVD on Plan-It-X. Complete and total sweethearts, those kids)

Thank you so much for answer my order and to post the disc!!!.

The split is out of stock, so I hope to have it.

Yeah, that definitely seems like a bad strategy for putting out records.

I do want to hear it, though.

thanks for this. i’ll be downloading shortly. hundred years war put out an lp on magister ludi records out of oklahoma. while musically the album is awesome, the label (and i won’t get into names here) decided it best to put it on 180gm vinyl with a price of 10 dollars, thus every record sold cost the label 3-4 dollars. i mean there’s d.i.y. and the independent spirit and all but at some point (esspecially if you are running a label) economics get involved. it’s great they wanted to put out albums, but at what point does losing handfuls of cash help a label with their future endeavors? on a side note, as i write this the computer has randomly chosen william martyr 17’s “four years long” for my commenting soundtrack. talk about bringing it all back home.