Another CD compilation from the Santa Barbara/Goleta area! The Pickle Patch was a venue, and some people’s living room, in Isla Vista, CA. It was run by who ever lived there at the time. The bands essentially played in the kitchen area, while every one watched from the living room and stairs. I went to a ton of shows there, from around 1997 to 2001. I went by myself pretty much every time, but through it all I ended up making plenty of friends. The main people behind it, Mike, Steve, Brett, Andy, um, another Mike, and others, turned it into a really active, totally DIY, positive place. I, and lots of other kids in the area, could rely on going there to see a couple great shows per week. It served as a destination for touring bands. And it’s amazingly cool that it existed. Best yet, it was small and intimate; you couldn’t be a stranger for long. It became much more than just a showspace. 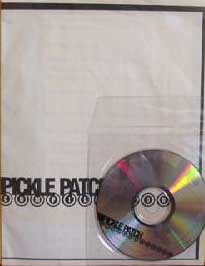 And, of course, it’s nice to have a great compilation of live songs from it. This comp comes with a ‘zine. In in there are long and heartfelt testimonials by folks involved in the place, show reviews, and pages for the bands. It looks like it’s still available, so if you want the full deal with all the background and stories and photos, then buy it.

For a time, this living room, and sometimes upstairs, served as a practice space for a band I was in with Steve. And there was a period of a couple months where we’d play a show there about once a week (or so it seemed).

As far as I could tell, Steve recorded every show. He’d dangle a few mics from the ceiling, and record onto cassette tape. I always wondered what he was planning to do with it all. So when he told me was putting together a comp on his label, Dim Mak, I was really excited. I then wondered about the sound quality. Plus I wondered if he’d put our band on it. And finally, I wondered if he’d include His Hero is Gone, since that show was insane.

To my surprise, the sound quality is actually good. Dan Weiss must be a mixing wiz. At any rate, there are 22 songs on this comp, from shows between 1997 and 1999, with bands ranging from lovely emo, to raging thrash, to brutal hardcore, to spoken words, to noise, and much more. I love this comp — I went to most of these shows; I have fond memories of them; and I can hear my friends in the background.

Songs from shows that really stood out for me are: The Third Sex, Former Members of Alfonsin (they played often, and their live shows were great), I Wish I, and Submission Hold.

holy shit! I go to UCSB and I am just finding out about this.. can’t believe it.

i stayed over night alot of times here…

I have so many fond memories of The Pickle Patch! I can’t believe I went to waht seems like a show every week. They all blend together now.

Matt: There’s a download in the comments on this post… though I’m unsure if it’s still up.

You talk alot about Ettil Vyre. You’d be a hero if you uploaded some.

awesome site. seriously love what you have going on.

Yeah, I remember following up with steve about some bands that he initially had wanted to put on, but the recordings had turned out not good enough.

I went to the Sawpit show, and I thought it was fun. I hadn’t heard them before it. What I remember most distinctly is the singer wearing a fanny pack and jumping really high along with the other members when they’d bust into the fast parts.

I’ll record tonight’s sleep. I shouldn’t have said tape recorder, ‘cause that’s not what it is. Digital voice recorder. It has enough memory to record an entire night. But I don’t have any snazzy algorithms on hand. I haven’t used the voice-activation feature much… so I’ll do a few nights and then see what happens. I have a feeling I don’t talk in my sleep..

The efforts on that comp were combined mostly between me and Steve, as I wasn’t at every show (for instance, I wasn’t at the Sawpit show.) We weren’t using great mics, mainly because I was constantly afraid my mics would get destroyed in the inevitable pit. But those mics still exist, amazingly enough. And I’m fairly happy with most of those recordings (although Steve will tell you we fought over a couple of the tracks, mainly due to low-quality recordings–we weren’t great EVERY night.)

I’m glad you like my blog! I actually digitally record the entire night (6-7 hours per night) and then, via an algorithm, strip out any audio that falls below a certain volume threshold. When I don’t snore much, it usually comes out to about 15-20 minutes of audio, which I then sift through for any vocalizations.

I suggest you try recording your sleep with your tape recorder! It’s tons of fun, most definitely.

Yeah, you bet. And I’m sure I didn’t give you nearly enough credit. I mean, it’s very amazing that you could turn those loud sounds hitting those dangling mics into such solid recordings. And I shouldn’t say that Steve was setting it up, because I’m sure you were all over it, too (ah, it was a while ago… the details become hazy. and I was one of the mostly alone folks who could sit in a corner and observe people, so I should be remembering things better).

And oh man, your blog is really stupendous. Those recordings are brilliant.

I have a voice-activated tape recorder. I now feel compelled to set it up next to my head and see if it picks up anything at night. I don’t know if I talk in my sleep. I probably just snore. Do you do it with a voice-activated recorder?

Thanks for the kind words. Those recordings were not easy to mix.