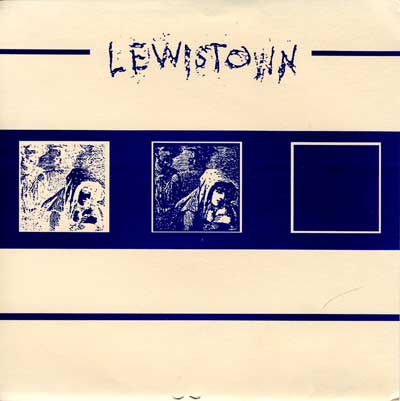 I think I got this Lewistown seven inch because I reviewed it. I dug it because of the nice and vaguely-melodic slugfuzzed guitars, and the snappy snare (tag line on the record: “Spreading the violence of ‘mid-tempo emo core’ since 1996”). I once played a show with them at a pizza place in Phoenix… in front of about six people, not including band members. I seemed to be the only one there who was totally psyched to see them.

It was put out on Bug Recordings. Both the label and band were from Richmond, Virginia. I reckon this is from 1996, but it could be 1997.

I have an untitled compilation 7” with two Lewistown tracks on it. The rest of it is teo tracks from Flesh Eating Creeps, Tri-state Killing Spree, and Our Time. I keep meaning to rip it and post it up on Youth in Arcadia. maybe someday

i used to talk to this girl dana, who was the girlfreind of james (i think that was/is his name) who sung for lewistown…….not a bad band, kinda monotonous at times, but there where many worse bands playing stuff like this………

Yes, I will be posting soon. I’ve been super busy with family matters, and ‘zine-making, and work and blah blah. I am moving to a place of my own pretty soon, and after that will devote more time to posting. I’ve picked up some cool records. And I’m also planning to transfer pretty much my entire collection. For a lot of those I’ll just do simple posts containing multiple records (and probably without scanned inserts) - many of those will be fairly common records, but I just want to have them all digital, and I figure others will, too. stay tuned!

man, i get off on the sound of that snare… you gonna update again any time?