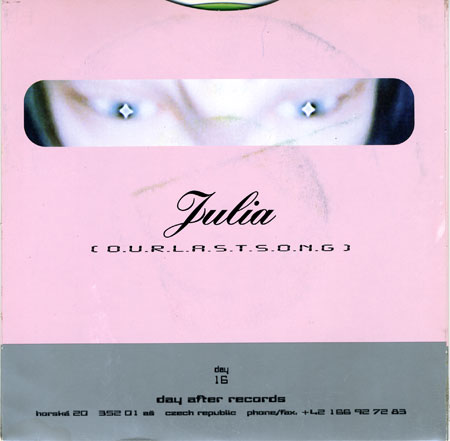 This split 7″ with Julia and Sunshine arrived out of nowhere one day while I was doing handywork at Ebullition (well, somewhere mostly unknown to me… I think it came from someone’s basement). This was far after Julia broke up. Their song on here is titled, “Our Last Song.”

Incidentally, I was at their final show, at the Living Room in Goleta, in 1996. That was the first time I ever heard them, so I wasn’t familiar with their songs. However, it was obviously a big deal to everyone that they were there playing their last show. I remember it being a great set, wrought with emotion and finality. The crowd’s final ovation lasted a few minutes.

I find this recording to be fitting as their last song, because it reminds me a lot of their set that night. The recording even sounds live. I wouldn’t at all be surprised if this really is a recording of the last song they played.

Apologies for the crackliness at the beginning. It’s green vinyl, and did not come with a freaking sleeve, and so it’s not in the most stellar condition. 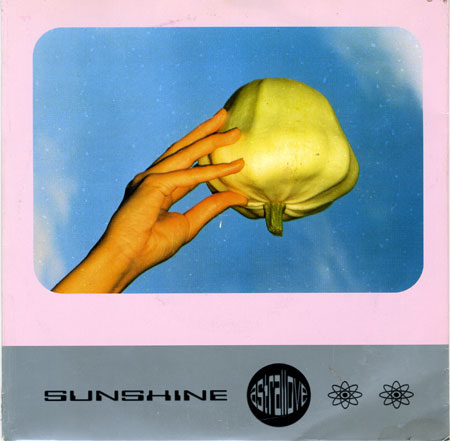 Shortly before getting this record, I bought the Sunshine Necromance CD. It’s an energetic, dancy, tight album, with strong pop hooks and occasional laserbeam sounds. The song on this split, though, is more subdued and emo. I like what they became. I have Velvet Suicide, too, but I never listened to it much. Necromance is great. Read a review on Popmatters.com of the re-release of Necromance with, as a bonus track, the song on this split: Astral Love!

Somehow they fit a nine and a half minute song on one side of a 7″. Way to go guys.

This was put out by the Czech label, Day After Records.

In Memory of Jason

Thanks, I’ll grab when I’m back on my own computer. I went to the post yesterday, and meant to download it, but I got distracted…

I’ll up that Lumber 7” on mediafire tomorrow.

Yeah, from what my sources tell me Lumber started when Julia was already a band, but I’m guessing the 7” was released before a lot of this stuff. It certainly sounds that way.

Also, ryan, the Han Shan is in the comments to my original post on it (#1!) on my blog

I wrote a description about them on last.fm.

Ah. I don’t see that anywhere on my insert.

But it makes sense!

I don’t have all of Julia’s stuff. I don’t have the 7”s. And I only have Eucalyptus on tape.

I was trying so much to find this record (I have all Julia releases), and now I have 3 copies. Lol.

Btw, the insert says: “Recorded Live by Mira [The Guy who runs Day After]”

One of the best bands. I have a .zip of the Lumber s/t 7” (pre/proto-Julia) if anyone wants it…