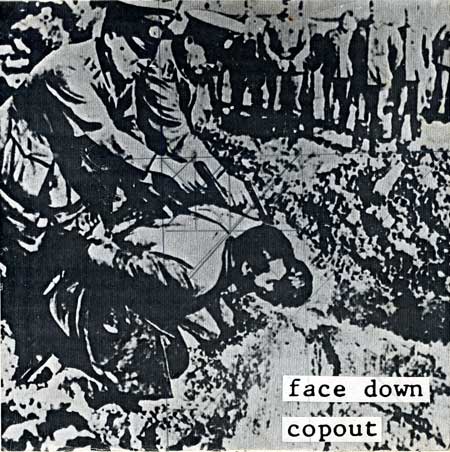 Oops, sorry. It’s been far too long since a post. Things just stopped going my way for a little bit there. And so now I’m compromising, and posting anyway. I meant to post this split along with the Face Down – War of Survival 7″, but I messed up last spring and mistakenly sold that record to a local record shop. I went there last week to see if they still had it (because I assumed they would), and they did, except the place was selling it for a totally bloated $18. Pre-Tragedy! yeah, whatever, man. So that really bummed me out (for the record, he offered me a discount for trying to buy back my own record, but it was still more than I had). So here’s just the split. And I’m sure it’s something whose mp3’s have circulated elsewhere, so this isn’t very exciting. Plus my record isn’t in EX++ condition, or whatever (note: the scratches at the beginning only last a few seconds).

If anyone has the Face Down 7″ on computer, please pass it on. I’d like to hear it again. I don’t remember the songs being as good as the two songs on this split, but it was still pretty good. Yes, I am an idiot for selling it. But I was totally broke, and making rash decisions.

This split came out on Perspective Records in 1993. Both bands were from Tennessee. Both are totally awesome. Both have members of His Hero Is Gone, etc. (and I’m sure there are other things to note, but I just don’t know how to do it.) Copout is better known, but darn it if I don’t have a certain strong affinity for the Face Down tracks. The second one, “Why,” is my favorite on the record. It sends shivers.

Copout is super fast, explosive, thrashy, and amazing. I’ve removed the ten second long gaps between each song – mostly because listening to them would only give you more time to consider the crackles on the transfer. Face Down is driving, fast, with some melody, and still a frantic nature similar to Copout. Kind of reminds me of Apeface from the Apeface/Lemming split.

As an easily-influenced youth, after listening to this I went about five years before even considering to listen to Fugazi.

My friend used this cover for an art project in high school, hence the pencil grid.

More posts soon (the other post I had in mind also had some mess-ups, but they are being rectified like right now).

Hi Matt. Nice - I haven’t heard that Copout 7”. Snagging it now. Yeah, I bet they were totally sick live.

Thanks much for this! I’ve been looking for mp3s of this and the s/t 7” (which I just found a few minutes ago on 7 inch punk) for years. I used to have both of these 7”s back in the mid ’90s. I don’t think that either of these records really captured their true sound, but live they were one of the most powerful bands I’ve ever seen (in any seen) and certainly the best hardcore band. I mean they were just sick, as anyone else who’s seen them can attest to as well. I got the 7” from them after a show in the summer of ‘94.