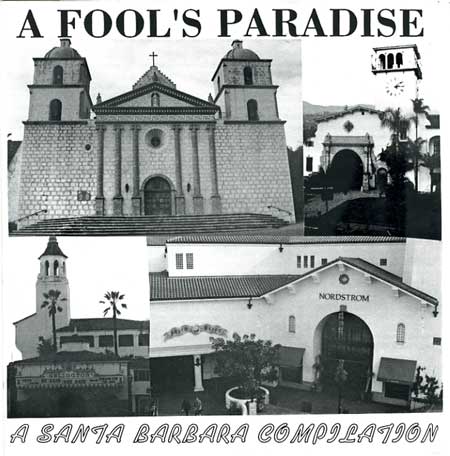 I remain faithful: so here is a 7″ comp from my mostly-homeburg Santa Barbara. A Fool’s Paradise – A Santa Barbara Compilation, put out by Little Redhead Records in 1991.

Featured on this comp are:

This comp comes with quite a nice booklet, and I’ve scanned it and included it in the zip. There’s a ’90/’91 SB scene report, two pages for each band, and some additional info. I moved to SB in 1988, and was 11 years-old when this comp came out. I missed the release, since I was going through a big motley crue and skid row phase. In fact, I didn’t get my hands on this comp until a few weeks ago, when I found it in a record store in Portland (full disclosure: I found it eight months ago in that record store, and vowed at the time to come back and buy it as soon as I saved up $4).

To convey the tone of this record, here’s a quote from Jamey’s intro:

True, the place is really beautiful and there are lots of neat people, places, and history scattered around, but still, I can’t help but get the feeling that the whole place is just one characterless, pre-packaged, plastic fantasy you can buy in the windows of the many cutesy boutiques that seem to make up the place.

I kind of felt the same thing when I was living there. It’s such a tourist town, and the quality of the stores and businesses just degraded as the city pandered more and more to all the visitors from LA, Germany, and everywhere. The architecture and signage are so strictly enforced, and after a few years you realize that it’s an artificially-induced homogeneity. Personally, it wasn’t such a big deal to me, since I was pretty intent on just being a surfer and a skater. There was a period of a few years where I’d say I went downtown about five times. If there were waves, I surfed a few times a day. If there weren’t, I climbed the roads in Montecito and then bombed down them on my skateboard. When I moved from the city, a few years ago, I said no way I’d ever move back. However, these days I miss it. I miss the ocean, the mountains, and all the burrito shacks. Last night I dreamed I was there, walking home along windy roads in the Riviera, passing through a tennis club in the hills. I stood with a friend, and we marveled at the beautiful eucalyptus trees.

This comp’s got a range of bands, and it seems, in my mind, to cover a transitional period in punk rock: 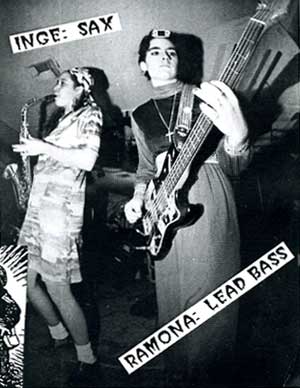 P.M.S. (short for Pre Marital Sex), is an all-girl band (a big one: vocals, rhythm bass, lead bass, guitar, drums, keyboard, sax) playing upbeat, straight punk rock. They sing about the virtues of self-gratification. (stay tuned for next post, where Rugburn, also from Santa Barbara, present their take on the same subject.)

Suckerpunch is probably best known as having a song on the Give Me Back comp. But their ten inch, put out by Little Redhead, is super good. They play fast, tight punk with some heavier chunks. They remind me a bit of Mexican Power Authority.

Latch Key Kids also, like the first two bands, play skate/street punk type stuff. They sing about being latch key kids. It’s a straight tune – verse, chorus, etc. repetitive. Both of my parents worked, and so, like these guys, I was a latch key kid in SB. Except my parents never locked their doors. So I never had a key. I don’t my parents even kept a key on their selves. And if they weren’t home when I got home from school, I’d just go skate.

Side two’s got Reality Control, a band containing Jamey, the maker of this record, and also John Lyons, recorder of like half the ebullition records, runner of Reality Control? records, player in Agent 94 and others, and sound man for countless shows in town. They play really fast punk rock. And they sing about the lame Santa Barbara daily newspaper. They remind me of a punk band some friends had when I was in high school.

And last, one of my favorite bands, Downcast! And this song is the one that, on this record, really seems to mark the transition in the scene. I doubt it’s a far stretch to say that they changed the scene in SB (and probably beyond) from more ’80s-feelin’ skate punk rock, to political and hardcore and emotional hardcore, etc. I mean, holy shit, man, they were a good band. Chunky, metallic guitars, pronounced, solid drums, super-poignant and political and social lyrics. This track is an earlier version of “They Are Not,” which was later situated as the second song on side two of their lp. This version’s got a spoken word part in the middle. 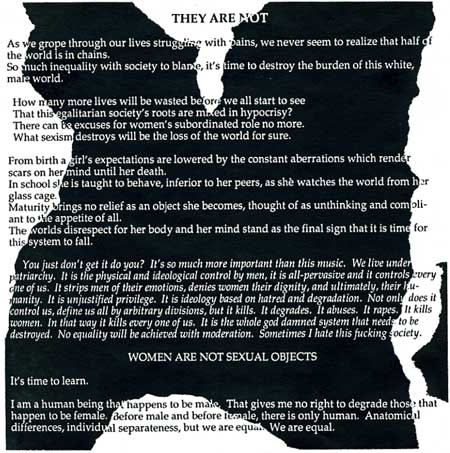 Use to go to Isla Vista to the shows at The Red Barn quite often ( I lived in Ojai at the time) and seen all these bands and more . This was a good time in my life . I miss hearing these bands on a regular basis . Thank you for posting this .

wow. weird to find this on the ol’ interwebs. my name is mark and i was in the latch key kids. god that was a long time ago…

Thanks for this. Didn’t knew Reality Control had any official releases..