End of the Line

Ricardo requested this. Here’s the 9 song End of the Line lp, released in 1993 on Ebullition. I’m fairly certain this is still available from Ebullition, and so the best way to obtain it is probably to ask your local record store to order it. I’m also really certain that Kent would be super stoked to be rid of them.

End of the Line has three members from Heroin, and one (the singer) from John Henry West / Han Shan. The drummer, Aaron, is currently in the Portland band, Dangerous Boys Club (he drummed in Heroin and sang in Antioch Arrow… so check out his current band). So… this lp should already be familiar? 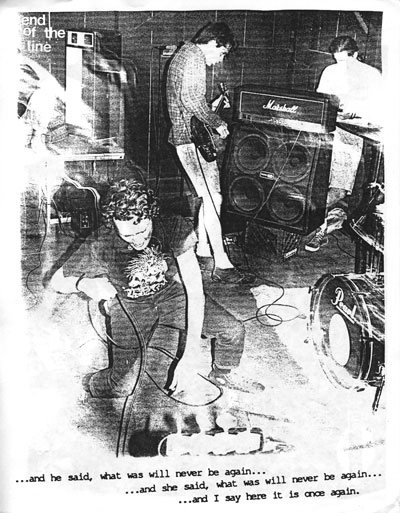 Here’s the last song on side a.

When I was first learning to drum, I emulated this style. I basically learned by listening to Heroin and this lp on my headphones while I practiced. It took me a while to get this fast beat down – two high hat hits, two snare hits, four bass hits, one cymbal: REPEAT. I hadn’t heard it before Heroin. But then Mohinder, Antioch Arrow, and a few others repeated it exactly. I gathered that this was the way to play fast. And it’s much more interesting than straight blast beats or speed metal beats. Still, when I played in this machine kills I didn’t really have it correct – I didn’t get it straight until the band after that (but, no recordings exist!)

This lp is all they recorded. They had a version of Burning Down on the Give Me Back compilation (1991).

One thing amuses me: to think about how the big mainstream fad at this time was “grunge” music. To think about how Nirvana and Soundgarden – at the time even – appealed to my parents, but how bands like this one really took punk and said, “I’m speeding it up, I’m making it heavier and crazier and fuck sitting around in a studio polishing our cymbals, here’s some loud, fast, spazzy shit!” And they didn’t need to dress the part, either.

–End of the Line–

Mulder breaks the news to Scully

Ha, that is awesome, Geno. I think the Mohinder tempo is like 160 or so.

If anyone is still interested in figuring out this drum beat, but is unsure on their drum tab skills, here is a link to a free drum tab player: http://www.drumtabber.com/index.php?p=1_6_Player

Heroin uses that beat the most. I can’t find any newer bands that have a sound similar to them. Dose any one know any bands that sound like them?

Oh yeah, Manumission does it too. Although the drummer usually alternates the snare and high hat hits, so there are three high hat hits between each cymbal accent (rather than hitting the high hat and snare at the same time, for two high hat hits).

Here’s another drum beat I hear in lots of similar hardcore bands,

I’m more of a guitar player, I do some drums, but not as well. Bands like Antioch Arrow and Mohinder have been a big influence on my guitar style. Lots of frantic octaves and lots of diminished interval riffs !

Yeah, I can kind of hear it in that Neil Perry song. But the drummer doesn’t always accent it with the cymbal at the same time. He just blasts through.

Here’s three examples, if anyone else reading this wants them:

Geno - I forgot that Makara and Mohinder had the same drummer. I thought they shared a different member, and that the drummer just had similar styles.

Yeah, I’ve been trying to think of a name for this beat for years. I think I was just calling it the Mohinder Beat, too… let’s think on this.

The drummer in Jenny Piccolo was in Mohinder as well as Makara. In that Neil Perry song” memoirs of an illiterate penpal” its sorta that style

The drum beats on the Honeywell song undesireable” sound like a choppier version of that beat. We should give that drum beat we’ve been discussing a name or something. I always call it the Mohinder beat, but its not exclusive to them. What would you call it?

I’ll check that video once I get off work.

Jenny Piccolo had the same drummer as Mohinder, right?

Ya, I remember it in some Makara songs. But I can’t recall hearing it in any Neil Perry songs. Nor Honeywell, either (though they play super fast… but I thought it was different. I’ll look out for it.)

Ruhaeda does it briefly on one song.

Thanks Ryan, i’m going to try that out! Have you seen the guyver one video on youtube? http://www.youtube.com/watch?v=iu3kptjzVUk At around 1:47, the drummer does that beat

Other bands I can think off that use this beat:

Jenny Piccolo(especially on the “informations battle to denounce the genocide” album where they mix that beat with blast beats in a combination of that sounds like mohinder and crossed out.

Geno, here’s my take of the drum tab.

Bands that bust this: Mohinder, End of the Line, Heroin, Antioch Arrow… and others.

I’m not sure if I have the bass drum correct. But it’s close.

Do you think you could make a drum tab for that style of drum beat used by this band? I’ve asked some drummer friends of mine to figure out the drums for mohinder and similar bands. They seem to just play a 1-2 beat really fast. To me it sounds like there is something a bit different enough to stand apart from typical fast punk beats. Any help is appreciated.

Don’t worry Ryan,I have download it from Unsavory Palindrome with the complete artwork a along time ago. Thanks anyway!!

I mention the With Intent EP cause the similarities with End Of The Line and I remember you metioned that you were going to post that 7”.

Also I remember read in a comment of Sapila in Hardcore For Nerds that he was looking for the End Of The Line demo and the Sixteen Bullets demo (I always want to hear that Mike Kirsch band).Have anyone those demos???

Ricardo, Geno posted that With Intent 7” in the comments a while back. You can browse his files here. http://www.mediafire.com/?sharekey=25a622ad0b31a1cfdd8b33b5aa27078d

If you can’t find it there, I can rip it. I have that record.

Thanks Ryan!! I love the others bands the members were involved,especially John Henry West and Antioch Arrow. Also is great you mentioned the drumming,cause I really like that “San Diego” style.

It’s nice to see that Aaron is still playing in bands,would be really great to see him in a hardcore band again,but is nearly impossible.

Some day you must post the With Intent 7”,cause have the same feeling of this LP.

Great Post! This album gets some spins every now and then. Who does anything like this band these days? I tried to figure out the drums to this band before and for me, the quality of my record didn’t sound too coherent. So is that a d-beat then. The wacky ring modulated kids song sample on here cracks me up.

wow, I didn’t realize this band was actually Aaron and the gang. had this record for ages and never bothered to listen to it :o guess it’s as good a time as any to do it now.