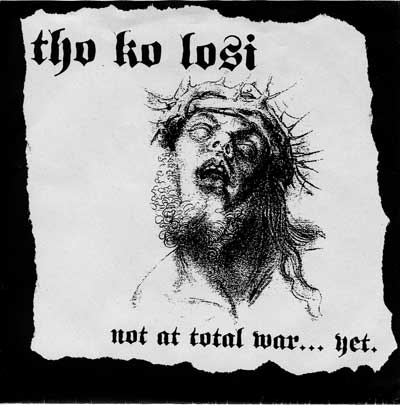 I saw these fellows play a show back in 1995 at Goleta Fest. They stood out from the rest of the bands (Julia, Constatine Sankathi, OEGP, Endeavor, etc.) because of their grindcore sensibilities, and I remember some of the poserly emo folks frowning and shaking their heads at them (rather than frowning and nodding their heads). On stage were two hulking men hunched over their microphones, spewing wrath toward god, religion, satan, and all the followers. One vocalist (who later went on to sing for Suicide Nation) has a growly voice, and the other is straight death. The music is akin to Conniption – a bit grindcore, a bit punk. That’s, like, a terribly written description…

This is a seven inch, containing five songs. Sample one below!

WHOAGH! Crap! I just realized that I forgot to post the actual download in the previous Young Ginns post. Why didn’t anyone tell me?! Maybe I should start paying attention to my mad d/l statz.

I don’t have the last match. But I do have destroy new granada. I’ll transfer it. It’s a good compilation. Just one-sided, though.

I’m going to try and post a seven inch today, and I will scan in the reach out/honeywell insert, too, since you wanted that a while ago and I forgot to do it.

Thanks for posting this and the Young Ginns 7”. You have a vinyl rip of the Last Match - 1997 to 1999 LP or the V/A Destroy New Granada, only for upload not to post.I want to hear this records and maybe buy it.I don’t have vinyl player for know.

ha ha… I was going to comment about that, but I figured I’d wait and see if you posted it and then I forgot about it. Glad to see it made it up.