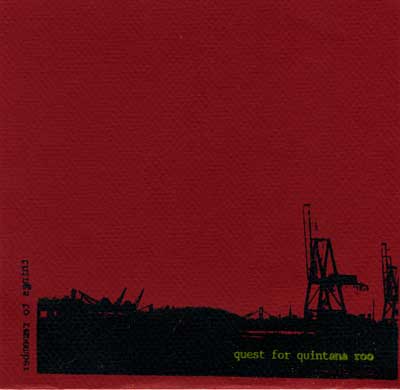 I was standing outside the garage known as the Biko House, and I heard someone screaming. So I rushed inside, only to discover the screams coming from a nerdy-looking blonde kid on guitar. Nothing to fear.

They were Quest for Quintana Roo. I bought the six song CD (on New Disorder) they were selling. And then later got the split 7″ with Uphill Battle (on Lo Pan), and another 7″ (on Chongo Smash/Reeducation). I think the CD is the best of the records here. But the 7″ is good, too. The split is a little so-so – I think it was recorded inside a tin can. Edit: I take that back; their stuff on the split is now my favorite, and it sounds perfect. The songs arevery piercing and frantic and raw and even gruesome. They really lay it all out. It’s stinging, fringe stuff. (Reminds me of some bits from Usurp Synapse.)

They have a few other releases, as listed on their website, but this is all I have. All three mentioned, plus inserts, can be found in the zip below. They were from Oakland, CA, and around from 1999 to, I believe, early 2002. And I think the singer/guitar player later sang for Funeral Diner. 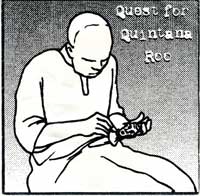 I liken them to the likes of Ettil Vrye, Bright Calm Blue, and such. Songs about interpersonal relationships, alienation, being lost and found.

They mention Arroyo Seco in the liner notes of the 7″. So I think next I’ll post the Arroyo Seco tape I have.

Uphill Battle was from Santa Barbara/Goleta. They were originally known as Crawlspace – and I have that demo somewhere, but I’m not sure where that somewhere is. I was friends with some of the members, and I saw them many times. They play fast, tight, and anguished metallic hardcore. They signed to Relapse a little after this split came out. I used to spend all my viewing time at their shows staring at the drummer, because he’s absolutely amazing. Their side of the split has one song, and it’s great. That last minute and ten is intense.

quest for quintana roo were such an incredible band with an insane live show. i caught them for the first time at one of their last shows at the los gatos outhouse and just….wow.

i know the drummer went on to play in a pop punk band whose name i cant recall right now..

a couple of members of QFQR have a new band called olemole. Aparrently one of them was in Burial Year as well..

Hey, thanks for sharing the Quest For Quintana Roo stuff. I’ve never heard of them before and thought your descritption plus the cryptic name sounded really interesting. After about five listens in a row I’m totally hooked. Amazing stuff.

They seem tgo be a very mysterious band, hardly any information about them on the internet.