Comps! Realization and The Spirit of Solitude

I was flipping through the one lowly row of seven inches in my favorite record store last week when I took a peek below the shelves to scope the “overflow box.” Lo, I was freaked in my stomach to discover that where previously only one box had been, 10 (ten!) boxes were now sandwiched down there. (I’m sure all those other boxes were always there – I just didn’t notice them.) I didn’t have time that day to go through them them, so I vowed to come back next week. Being the man of my vow that I am, I did just that. I made it through six boxes (four more for next weekend!). I came out with 14 seven inches, many of which I’m super excited about (Shotmaker 7″ on Kung Fu/Manticore; Assfactor 4 7″ on Repercussion*; Sleeping Body 7″ on Vermiform; Han Shan 7″, etc.)… plus I was psyched that my total cost was $20. Crazy how these records don’t go up more in value. Anyway! 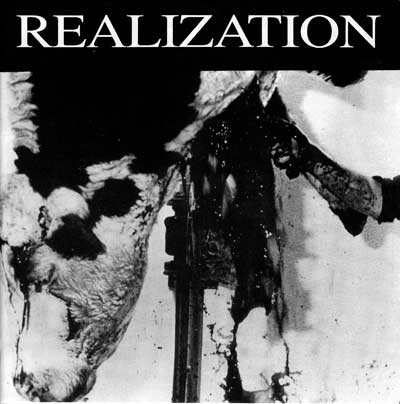 First up is the Realization compilation. Put out by Subjugation Records in 1993 (United Kingdom). On the comp are: Struggle, Feeding the Fire, Darkroom, Shortsight, and Framework.  All these bands can be summed up as (straight edge) hardcore. Also – and this doesn’t matter or anything – but I’m guessing that most, if not all, of the members of these bands are of high school age. This is a compilation for animal rights. And each band includes some writings on the matter.

Except Struggle. They chose “War 1″ as their song for the comp (later put on their 12”, and titled “War #1”). It’s  about the Gulf War. It’s a different recording than what’s on the lp. And correct me I’m wrong, but I don’t think this recording is on the discography CD. I remember when Kent was putting together the discography, and I told him that I could have sworn there’s a compilation out there with a different recording of a song that’s on the lp, and he told me I was full of bull. So I went through all the old heartattacks until I found a review for the Realization comp. Then I looked through his record collection, found it, and we played it and rocked out. But still, after all that I don’t think it ever made it to the discog. (There’s also an alternate recording of The Untitled (first song on side B of the lp) on the Lacking Mindset comp, which includes a voice over during the drumming part. That’s actually what I had been thinking of when I unearthed the Realization comp….) At any rate, now I finally have this record. When I found this I let out an audible “hwaugh!” and the cruster standing above me flipping through classic rock albums (what a poser!) looked at me like I was a dork.

What’s especially cool about this comp is how international it is. Feeding the Fire (blazing fast, sorta like Seein’ Red) is from Holland; Shortsight is from Belgium (female-vocaled, sort of street punk thrash stuff, a la Suckerpunch, Reality Control)… huh, I guess the other three are from the US. Well, that’s pretty international. And it’s a great comp, too!

I can’t find a full Yuletide Records release list. They put out records by Frail and Spirit Assembly and stuff (um, obviousy… I dunno why I typed that), and are one of those labels that I won’t pass up no matter what. This comp has Policy of Three, Ashes, Framework, and Point of View. Like the comp above, it’s another (straight edge) hardcore record from 1993. The Ashes song is good (fem-voxed). Check out Framework:

I’m pumped on my finds! I hope you enjoy them.

‘load everything at once: Realization Solitude

*you’ve all heard this record, right? no need to transfer it??

thanks for posting these… as always your blog is great!

Yeah, I was living with kent when he was put out the Struggle discography. And, while I didn’t have everything of theirs, I knew that there were odds and ends comp songs out there. I told him to make sure they were included!

Yet another Struggle song with a different recording not included on the discography–“Culture,” which was first recorded for the “Give Me Back” LP, also an Ebullition release so Kent really has no excuse on that one.

Of all those, I’ve just heard Oversight. (I haven’t even heard Earth Crisis.)

Framework’s singer, Shane Durgee has also been a member of Path of Resistance, Oversight, Gatekeeper and Farthest Man. The Gatekeeper demo was released right after the end of Framework, it’s pretty good.