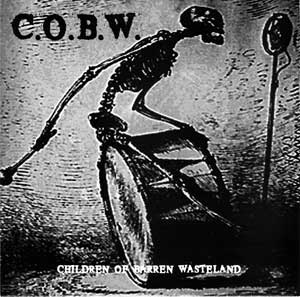 Because the popular people demanded it, here’s the Children of Barren Wasteland 7″. As mentioned in this post, COBW features Whisper, the singer from Zero Hour. It’s from 1996. So that’s a year or so after the Zero Hour split LP. This is a split release with Profane Existence and Skuld Releases (from Germany).

Whisper’s vocals in Zero Hour are pretty astounding and varying in intensity, tone, and so forth. In COBW, their volume is contained further within the recording, and the direction is a bit more straightforward. The entire band, actually, levels out a straightforward assault. After two songs (and the first two are good), they kind of seem to repeat themselves. The lyrics are, generally, about power, sexuality, slavery, society, etc. They aren’t as story-telling as the Zero Hour stuff. However, they are still powerful and filled with justifiable rage. Worth it to check out if you’re into Zero Hour!