In our quest to compile everything by Three Studies for a Crucifixion, it came to our attention that they have three songs on the 49th Parallel compilation (as listed on discogs.com). But we only had that first song in the unofficial discography zip (includes the demo, and a live set). And the rip of that comp that’s cruising around only has 13 tracks…

Where were those other two songs? On the record, perhaps! So I borrowed the record from a friend. And lo, it turns out that the listing on discogs.com is wrong (it’s also wrong about the Inept track list). The other two Three Studies songs are just bolded text in the lyric sheet. They aren’t actually different songs. So the discog is complete.

And here’s the 49th Parallel compilation! 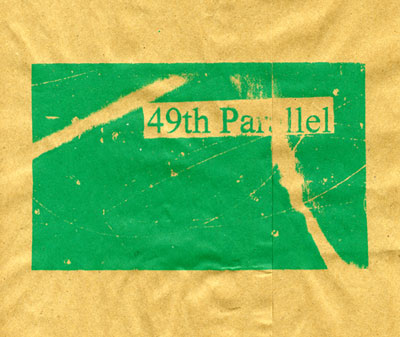 This is an lp, put out on Old Glory Records in 1997. It was also put out on CD by Disillusion records. 21 tracks. Here are the bands:

Many of these bands are from Ohio or Canada. This is a rad compilation. Many play pretty brutal and fast powerviolency stuff. Still Life has three tracks on side a (10 minutes of it, or so). It’s a departure from their usual sound. Here, they channel Kilowatthours (Travels in Constants, vol. 17) and Bugskull, producing three lo-fi, droney tracks. Tho Ko Losi sound like Monster X on their first song.

More songs by Inept can be found here on the Fugitive Equilibrium blog.

–download the 49th Parallel– like 70mb, insert included. It’s a pretty long comp (about 24 minutes each side)

Please tell me if I made any mistakes on this rip. I was sort of tired when cutting it into tracks.

My friend and I put this out on CD and later it was repressed on vinyl with the help of Old Glory Records. The cover img you show is the very rare green version. - Thanks for making it available. Peace!

I know where one could get the Still Life side of that split but I’m afraid that’s the only copy the Internet has to offer.

if you ever come across any records with Resin on please make a copy :)

I don’t have their split with Still Life. But I could probably track it down!

I recently have come across a live set by Resin and they completely blew me away. to my horror I don’t have any records by them. I think they had a split with Still Life (?), do you have anything by them? not counting tracks on this comp and on Blllleeeeeaaaaaaaaauuuurghh!

what a great find, thanks!