I recently picked up In/Humanity‘s Gets Killed by Robots 7″. Previously, I’d only heard a couple songs of theirs from comps (Amnesia, and I Can’t Live Without It), and while I liked those songs, I failed to seek out more. But this 7″ is rad. So here it is!

Also, you can snag their entire discog from Illogical Contraption. Apparently it was mixed differently than the original material – so that’s, in part, why you may want to d/l this 7″ in addition to getting the discography. 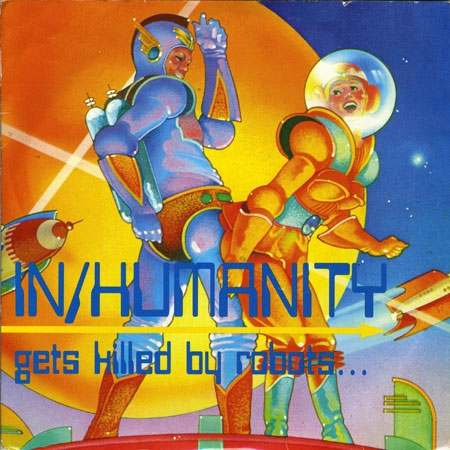 In an interview, the singer, Chris Bickel, says that this 7″ marks the point where In/Humanity first started getting good. It’s sort of wild, and artsy/unusual, loud/soft (emo violence! – Bickel’s terms). Reminds me a bit of Assfactor 4 crossed with Hose.Got.Cable. This came out in 1994.

Excuse the crackles. And I scanned the insert. It has some cool stuff.

Thank you so much Ryan.Would be really great if can post it with highest quality and scan th insert.

I recently buy the record from Interpunk (actually I send the money to a guy that I don´t know much about and he buy it the LP for me,because he have credit card) and was really expensive to me for the relation between my money and the dollar. Imagine if you Ryan paid US$100 for a record in Argentina!! What can I do?? Anything,if I want DIY records from USA,that is the price. Well,the record arrives and I was so happy but,one moment,this come with two shitty xeroxed inserts!!

Your version is the same Ryan??!!

I hope you can understand my bad bad english haha

Hey Ricardo. Yeah, I’ll upload that one for you. I’d like to have that on my computer, too. Is 192kbs good enough for you, or do you think it’s best to do higher (it doesn’t matter to me)?

And I just got some new records, and am borrowing a few from a friend, so I will have some new posts soon. For real!

Expect that end of the line next week. I can’t do it until after the weekend.

Thanks for posting this Ryan!! I want to know if you can upload (not necessarily in your blog) a good rip of the End Of The Line 12 and share it in the comments. I really appreciate it,cause I don´t have record player and I lost my mp3 of the record.

downloading it for the insert alone, thanks

holy shit, the discography is great. I’ve only listened to like a quarter of it so far. But it’s super violent! not to always do the “blank meets blank2” thing, but this is like reversal of man (intensity, similar vocals and snare sound) meets usurp synapse (brutal blast beats and weird time sigs).

in/humanity and assfactor were from the same town (columbia, sc) so that might explain some of the sonic similarity. Oh, and king supa also were from columbia too.