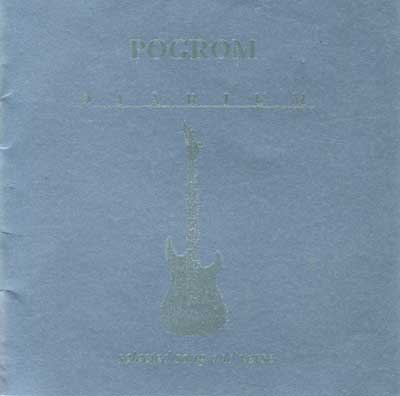 No! It’s a total metal attack: super-technical programmed drumming, major riffs and licks and shredding solos, and operatic, carrying vocals. Lyric-wise, this can only be labeled as personal metal. Songs cover such topics as shitty housemates, being a scientist, grandparents growing old, and really loving metal. The songs have explanations, and he’s also included some journal entries in the booklet.

As a solo metal project, it took him years to put this all together. I can only imagine how much work went into the drum patterns alone. So, the vocal styles vary a little from song to song (and, though it’s pretty consistent, you can tell this didn’t emerge out of one recording session). To get a clearer idea of the contents and ideas behind it, here’s the prologue in the author, Jason Green’s, own words:

Pogrom has always been about one thing: making and recording metal. Everything on this CD was recorded in apartments, houses, garages, schools rehearsal rooms – anywhere I could find to get the songs onto tape. For the past five years, since 1992, I’ve been saving drums patterns and writing lyrics, putting out little demos here and there. At this time, there have been twenty-one songs completed, most of them done on 4-track decks. A handful have been upgraded with better equipment and compiled to form this representative collection.This won’t sound like a real CD to me, it will sound fake. It shouldn’t rest on the same shelf as the incredible 80’s metal bands. But I don’t want these songs to fade away, because if they do, then so will I, for this is my everything. I love heavy metal, and I love making it. I just hope there are people out there that still like to hear it.

I figure that many people that listen to this will say that it sounds like some idiot trying to do something he wasn’t cut out to do. All I can provide for these people is honesty. These songs might as well be my skin, my hair – they are me, ugly and embarrassing. I will always wonder if I did the right thing by making this available to so many people, most of them strangers.

This booklet is essentially a diary. Most of the lyrics came from a hand-written journal. Other writings have been included here as well, some that relate to the songs, and others that are meant to stand on their own.

For a brief stint, I called this project Cephalon, but it didn’t seem right after the fact. There’s no political statement in calling this Pogrom. I chose the name because it sounded metallic. And it quickly grew catchy, to the point where *Pogrom* became synonmous with myself.

It’s good to be back.

I’ve been big into this CD from the day I got it. It’s different. It’s pretty epic. If you truly like metal, then you’ll probably appreciate it. Research has uncovered pretty much zero ‘net presence (I found some false information on one site, and that’s it). So I’m guessing not a lot of people have heard this. That’s a shame, but, well, here you go. I wonder what Jason Green’s been up to since this?

(My superdrive on my macbook pro sucks, so I have to thank world cup soccer pinball grand champ SSW, author of the Degrassi Digest, for ripping this for me. Thanks.)

i grew up with jason in high school and college and had the pleasure of playing with him through that period. he is such a great and talented guy, i am so happy that there are people out here that appreciate this CD. it’s funny, i was actually listening to all the stuff of his that i had, the past couple days and was just thinking “damn, this stuff doesn’t get the mass enjoyment it deserves.” it is such a nakedly honest CD, you can really learn by listening to it. about both riffs and life! he made a couple tapes as well previous to that, that have alternate versions of some of those songs as well as some songs not on there. you rule for appreciating this CD!

thanks for putting this up.

this, uh, didn’t sell so well. needless to say, I still have a handful left - shoot me an email and I’ll send ya one.

more recent stuff is on my soundclick page: http://www.soundclick.com/bands/default.cfm?bandID=696820&content=music

oh fuck, i’ve been dying to hear this since the first time someone mentioned that there is a cd out there.

here’s what i found while drifting through google: a post on the monster x msg board: http://lix.in/cce20966

he links to a band website in this post by a band called SANCTUM AZ. the site itself is offline by now, but i found it on archive.org. this is what the bios i’ve found say about him:

“Jason Green, a.k.a. “The Scientist,” has been playing and creating music professionally for about 13 years. Jason began his musical career in the musical void of Marietta, Ohio. There were however, some local “hero” guitarists who Jason began training under. His formal guitar studies lasted about two years, before he realized that he had the tools to further study music and guitar on his own, an endeavor which he currently pursues. Jason’s previous bands include Catalyst, Proper Burial, Victory’s Prophet, and Pogrom. His influences range from 80s and 90s thrash and death bands to 70s jazz fusion guitarists.”

Thanks for this!! I found a copy of this at a once awesome but now shitty record store in my area. I got really excited that I found it and went up to the counter with the cover to have them pull the CD so I could buy it and they couldn’t find it. I was pissed.

Wow, this is great.

SBJ: Yes, this album is totally awesome. But I don’t know if I’ve encountered anyone else who’s heard it.. it’s surprising. It’s self-released and -promoted, so I guess it just never saw the circulation it deserved. I wonder how kent heard of Pogrom when he was compiling the comp. There must be some demo stuff out there, or maybe he was in other bands before this… I don’t know why I never asked him that.

Anyway, yeah I’m definitely into transferring the 100 Years War lp! I’m really eager to hear it. So, sounds like a great deal! Send me an email at master.cob at gmail, and I’ll pass on my address.

thanks a bunch for much of the material here that i have forgotten about, or just haven’t heard of. a very exceptional blog indeed.

if you’re interested in exchanging links, i think that’d be killer… anyways, keep up the great work!!

first off, i’d just like to say, awesome. i had no clue there was more than just the one song on XXX. i can’t wait to listen to this. next up, so you were interested in hearing the hundred year war lp, what if i make a deal with you. turns out i found a copy of the lp today at work, and was wondering if maybe you’d be interested in digitizing and posting this bad boy if i sent it your way. as it is i don’t currently have a way to transfer vinyl to binary or i’d do it myself and send you the lp anyway.