Here are two seven inches by Ex-Ignota. They were from the greater Santa Barbara area, and back when I was a high school student in Santa Barbara during the mid-90s, I caught a bunch of their shows. I honestly don’t remember much from the shows, except that I enjoyed them very much, and often left them looking forward to the next time I would see the band play.

The group quickly became recognized for strange and extreme live performances consisting of the members dancing and crashing into one another amidst sounds ranging from pounding chords, to gentle guitars, to Italian zombie movie soundtracks. The band seemed to like nothing better than to challenge each institution they encountered, and audiences were turned on.

When they first got started, they were called IG-88. You may have heard the IG-88 song on the Heartattack #10 compilation. That’s Ex-Ignota!

One seven inch on this post is the Lazarus is Back… record put out by Ebullition in 1995. Ebullition:

The band consisted of kids that were going to the local university; many of whom were art students. Ex-ignota played hardcore that was definitely influenced by a lot of arty musical concepts; abrasive and melodic, with singing and yelling, and lots of variety. They strove to do things just a bit differently. 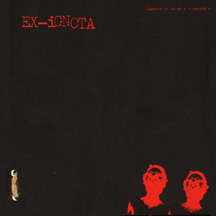 My record was the version with the oversized cover. And over the years it got tore up. So I had to get rid of the cover. But here is what it once looked like. After the break-up of the cover, my vinyl did NOT stay in top condition. So the two tracks from this contain snaps and pops. But I believe the record is not out of print, so buy it yourself if you want a fresh version.

Musically, these guys remind me a bit of St. James Infirmary mixt with Incurable Complaint and then mixt with whatever else. But that’s just me, and it doesn’t mean anything anyway. So here’s a preview track to help you decide for yourself.

(that’s an entire side of a record.)

Laid-back singer/songerwriter Jack Johnson, when he was at UCSB, made a short documentary about Ex-Ignota. Here it is:

The other record on this post is the 7″ put out on Redwood, also from 1995. That’s what the above song is from. The two songs on this record were also on the split CD with Uranium 9-Volt. 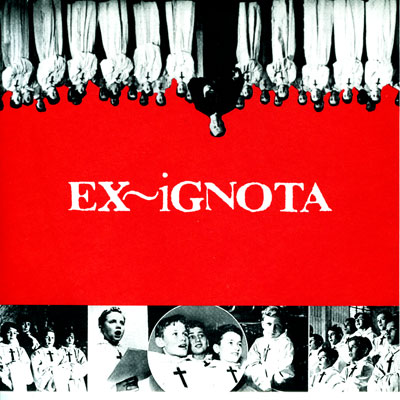 In addition to these records, they also put out a demo (under the name IG-88, and if anyone has this, please send it to me!!), as well as a full length CD. I haven’t heard the CD, but I am very eager to do so. Until then I consider myself a failed fan. I should just order it from somewhere! (but if you have it to share, please do so.) And they put out a split with Barcode. That split was posted on one of the music blogs on my music blogroll… I don’t remember which one! It’s been months.

Other notes: in one of the photos posted on their last.fm page, you can see Dylan from Stratego in the crowd. The band members set up lots of shows in Isla Vista. I really like the sweet melodic guitar on “Truce.” If I could play guitar, I’d probably just play stuff like that all day.

Great band! I hope you enjoy it.

also! If I can make some requests – can anyone hook me up with these:

— bob tilton – crescent (my cd is all scratched, and I like this album) Thanks Geno!;

— (as mentioned above) the ex-ignota cd;

–False Object Sensor compilation. I have this on vinyl, and it rules. x-mist put out the vinyl and vermiform put out the CD. So if someone has the cd version, I’d like to have the files. If not, I will just transfer it my damn self. Thanks Ricardo!

— lastly, an unknown band that I’m searching for (lost the mix tape). I know they made at least three songs, and the lyrics of one were, “Now that it’s gone, I can’t get it back. Now that it’s gone, I need it back.” they sung/screamed, and sounded like plunger, nuzzle, benchmark, indian summer, etc. and they had to have been from before 1997. I can’t believe it’s taking me so long to figure this out. help please… It was Pawn. Thanks Geno!

Thanks for the nice words, Matt! That comment made my day brighter.

hm: If I ever get my hands on the Ex-Ignota CD, I’ll post it, and I’ll include the song from the heartattack comp… for the sake of completion, I guess.

Thank you very much for this post and more importantly for this blog. The chance to preview amazing bands that otherwise I’d never have the chance to hear, makes me very grateful. My life is a little brighter today. Much appreciation. Thanks again.

wow. I certainly didn’t expect to see that name. I loved that heartattack 10 track back in the day. tremendous blog, by the way.

as far as the ex-ignota cd goes, it came out on satellite transmissions out of ft collins or boulder colorado. when i was living in denver i saw copies of this disc in the used sections of every store in town. im sure theyre still available. if youve got friends there you could probably get one for a few bucks. i havent ever seen it anywhere else. maybe even consider contacting wax trax in denver and seeing if they could send one. seems like a lot of work. wish i would have grabbed one seeing as how hard it is to find now.

I don’t seem to have my Hail Mary seven inches anymore… this bugs me.

I don’t know. The violin made me think of tem eyos ki. But I doubt that’s correct.

I bought a portrait CD, and didn’t like it much.

Do you think you might know who this band is?

The mp3 was labeled kisses and hugs, but it’s not the same band who did a split with half-man. It sounds like portrait and I’robot. I can’t find anything on this band.

I have two Hail Mary seven inches. …well there’s a small chance I got rid of them last year when I was just about out of money and needed to sell some things. I’ll look and see if I still have them.

If anybody have the Hail Mary CD on Vermiform or any transfer of his 7”,please upload it.

Yes! amazing, thanks. This was a mystery in my life that lasted way too long.

there was another version of thief on their 7”, which was uploaded here: http://pukekos.blogspot.com/2008/03/pawn.html

huh, yeah! They sound different than I remember, but this has to be the same band. They sound a lot like William Martyr 17…

But dang, man, thanks! I was not expecting anyone to answer - not to mention with the correct band.

I think those lyrics are from the band Pawn, Try track 8, called Thief.

I have that record, heres a link. http://www.mediafire.com/?bypfadtm1wt

Yeah, I just got sick of accommodating the big 7” cover whenever I had to stuff my records in boxes when moving. It got tore up, and so I chucked it.

I wish I could remember stuff about their shows. I just remember that I saw them about three times in the span of a few months. And that got me liking them a lot. And then they broke up. I hope someone shares the CD. I really like everything else I’ve heard by them. It’s “artsy” and all, but it’s still very accessible and interesting.

(side note that means nothing: I went to high school with a guy named sergio robledo… and it’s a name that I occasionally recall, because it rolls off the tongue so nicely.)

oh ya! ex-Ignota were my favorite band for the period they were together. I distinctly remember their first show in the Bay Area after changing their name to ex-Ignota. In true artsy fashion, they would NOT explain the name change or meaning of the new name except to say it had something to do with “gold.” They kicked off that show facing away from the audience blaring feedback while some sample (also on that split) played. Then the music kicked in and they all spun around and rocked the fuck out. Shortly after that, I moved to IV and those dudes got way into art and way outta punk. (To be honest, they struck me as fairly privileged and embarking on post-graduating trips around the globe.) Next thing I heard, they were in The Court & Spark playing country. I didn’t even know about Broker/Dealer. wow

I have that oversize Ebullition 7’’ (how cumbersome!)

I also believe sergio robledo-maderazo (of From Monument To Masses) had some role in releasing the Redwood split.

Thanx for posting this!!