After listening to and liking the Rugburn / Jeberrekenelle split, I sought out more music by both bands. And through the power of hard work I succeeded. Both contain materials that stand well alongside the songs I’d already heard. The disks came to me from mp3.com, back in 1998 or so. Basically, burned disks with printed covers, and that’s it. I will emphasize how this was a most agreeable service, simple and plain as it was, as I don’t believe that these days a person could so easily purchase CDs from these bands. But, fortunately, Jeberrekenelle’s stuff can be found and downloaded from Mr. Dwab‘s site. And now here’s Rugburn. 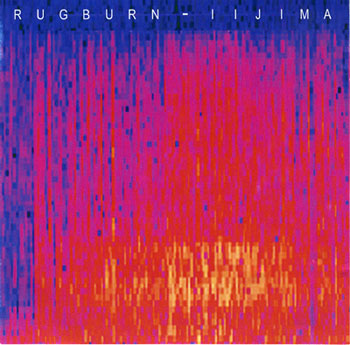 That’s really the cover. It must have been the cover of a later release. It’s nowhere near as cool as their cover on the split. As you can read on their myspace page, they were around from 1992 to 1995. They started in Santa Barbara, and halfway through moved to San Francisco. The move to SF also signaled a change in moniker. I’m guessing they did this because another band already had Rugburn, or something like that. Or maybe they just felt like kicking off their life in the new city under a slightly different identify. At any rate, nothing much changed music-wise (to which I say, thank you!). I don’t know when within this discog that the band switches names. Perhaps it’s when things go live! To me, those audience members sound like prototypical San Franciscans (I think you’ll find that you agree).

I can’t very well describe the same band differently twice, so: “At any rate, their music is very good: driving guitar, great drumming, some rocking, forward elements, somewhat reminiscent of Iconoclast, [and maybe some kirsch stuff… oops, this means I’ve officially described it differently], vocals kind of reminding me of 1.6 Band.” So give it a listen. Sometimes I wish I could put more meaningful things down in descriptions – some great phrases that really capture the sound and feel of the band, rather than mostly trite and general terms that I just fling out in order to fill space. But other times I don’t care, and I find satisfaction in knowing that the band can very well speak for itself. This band shreds and rolls, and I’m really into them. The live recording on this sounds great. I love hearing live versions of songs that can’t be found on other recordings.

The only part about this discography that I don’t like so much is in the first song when the singer repeats, “No!” I just don’t understand why he says it. And, in general, I’m not into when singers sing No!, or, for that matter, Woah!, or MmHmm. And so forth. I don’t agree that they need to fill in the space with such drabble. Just leave it blank. This is all to say that that’s my only complaint, and as it sucks as a complaint, I’m left mostly with strongly positive feelings toward these songs. 15 songs total. What a treat!

WOW! I just recently found a flyer for my first Nomeansno show at the UFCW in Goleta back in ‘94 and saw that Jeberrekenelle were the opening band so I did a google search and came across this page. Thanks for posting this up. I remember seeing them at the UFCW a few times back in the day.

when i was 16 my band covered ‘lawnmower.’ i love all of johns releases. i mail ordered everything he put out.

i think that pdfs are the best solution, because itunes deletes the artwork sometimes. dunno why.

Sapila: You bet! It’s nice to have to insert. Corey: I did not know that. I have a pretty weird process for putting these together - I transfer into audacity, cut it up into tracks and export each to mp3, then I put the mp3s into itunes and add the metadata, then I copy them out of the itunes library, add the pdf into the folder, and zip it up. I don’t know if this is the best way to do this, especially because there are probably files attached to the itunes library that then get detached when I copy it out of there (such as cover image)…

Cool stuff! I like the PDF of the insert. Did you know you can store PDFs in iTunes? If you add some of the album info, then it will show up with the music.

this made my day. thanks!