Kinda like the Bali High soundtrack, here’s a soundtrack from a surf video. This one’s from the ’90s! The Search, The Search II, and The Search III (Beyond the Boundaries) are my three favorite surf movies of all time. And I think of those three, The Search II tops them all. But just barely. And only when I feel like it. I’ll have that soundtrack up shortly, but first here’s The Search: An Indian Ocean Sojourn. 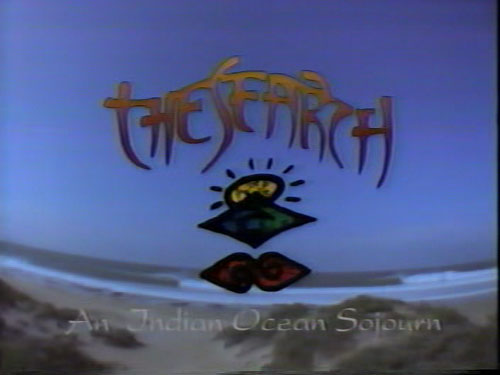 The Search follows the Rip Curl team as they takes big boats around to exotic locales around Southern Africa (they also drive to spots). And there’s some Bali. This series (there are five in total… I believe – I have five of them, at least) was made by Sonny Miller. And he did a great job. You get a great sense of the adventure, and of the foreignness of the countries they visit. He makes a point to intersperse landscape shots – signs, businesses, people, animals, underwater, etc. It’s shot with style, and the surfers are great. And he fits in some local music. Unlike Bali High, there is no narration. But you will hear some chattering in between songs. One funny part is when they’re at Frankie’s house in South Africa, and are trying to jam in the basement, and his dad keeps flashing the lights and hitting the floor to tell them to shut up. “It comes up through the floor. The whole floor vibrates!” (what you can’t see is that he’s holding a washcloth when he says this, and inadvertently makes a “jacking off” motion with his hand – the whole floor vibrates!)

This soundtrack is pretty much all instrumentals. There’s a focus on jazzy tunes, and there are also heavy screaming surf guitar vibrations. I don’t know the bands – I could probably stare hard at the credits to figure it out. But even then it’s difficult to tell which listing is for which song. Many of them are Tom Curren’s (a featured surfer) band. Near the beginning they pop into a cave and show him and his mates jamming. Other songs are by, I think, Satriani. 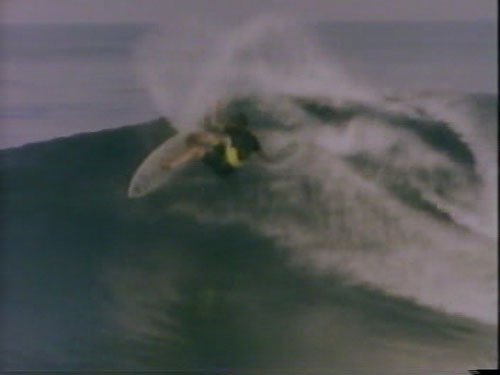 This tune is a top fave of mine. This is when they leave the city behind for the country, and hit up some kind of big beach break. When I first got this video I was really excited to come across this section. Curren had recently been featured on the cover of Surfer Magazine (as a sequence of photographs). And when the video got to this section, I could tell right away that this was that session – from the color of the water, mostly. Also, this was during the rioting and protesting of apartheid – and we see clips of some of that action overlapping the session. The guitar on this song basically sings the song. It tells a tale, speaking a language all its own. And the organ provides a nice atmosphere.

Once again, this rip is from a VHS tape that I transferred to DVD, and then ripped the audio off of. I think it’s a great soundtrack. And I’ll have The Search II up here soon!

Malcolm, wow! That’s rad. It looks like an extremely fun spot. For some reason I always assumed it was in the middle of nowhere.

In case the link above doesn’t work, here’s a fresh link to download the movie: https://mega.nz/#!A9RDFKBI!SrA8nP2lKjNNNdjJTIhax_WC-SmTFakvhOku5nhQeEU

And here’s that clip: https://www.youtube.com/watch?v=mFpiwIk46S8

Here’s a copy of the Search.

I haven’t uploaded the Search II yet. It had problems.

Thanks so much for making this available! Love these tunes and it’s great to be able to listen to them again!

Luis, I haven’t transferred that soundtrack. And I’m not sure if I’ll be able to do it any time soon. Plus that soundtrack has a lot of real bands on it, and they may object to me copying it.

ok ryan thankx for the update, the last tune of the video of the search 3, when the catch indo in the storm, the song look a like a vodoo chille of hendrix, what song is it?

ryan can you please upload the search 3 thank you