Going back once again to high school gym class – a fellow longhair gave me a cassette tape, stickered with “master cob” and with “heroin, lemming, apeface, moss icon, antischism” written on the label (I later added the second story window 7″ to it). I ended up listening to this tape pretty much every morning for over a year while carpooling to school. I still expect to hear the same record clicks, and transitions from song to song, when listening to the vinyl. The tape directed my musical interests for the next five years.

The bands served as take-off points for other bands. And that’s sort of the format of this post (and, content-wise, this post is more on the thrashy/crusty side). Only a few days ago did I get my hands on the vinyl of the Lemming/Apeface split 7″. I’m happy, because that master cob tape’s starting to fall apart.

So, starting with the Lemming/Apeface split 7″. It’s from 1994 (the Apeface songs were recorded in late ’93), and put out by Stinky Feet Records (they also put out the Mohinder/Nitwits split) and Nothing. These are the only Lemming songs I’ve heard. The first song, “Careless – Lifeless – Useless – Importance,” starts with a grumpy bass-line, with the singers, male and female, telling us the name of the song. The “Useless” is emphasized over the others. The band then launches into a fast thrash (redundant?) number, with “My life sucks!” as one of the discernible lines. There are tight stop/starts, back-and-forths between vocalists, and extremely high-pitched screaming.

The second track, PC, is slower and catchier, and is about hypocritical PC wankers.

Apeface begins with a foreboding announcer welcoming us, “distinguished guests, brothers and sisters, ladies and gentleman, friends and… enemies.” They’re a bit darker and less crazy than Lemming. But they can still play fast! Gruff vocals (sort of reminding me of Facedown), doomed guitars. I learned something after obtaining the vinyl: after the vocals come back in a little past the brilliant moment starting around 1:30, he doesn’t say, “hating authority, hating god” – he says “hating authority, hating cops.” I did not know that.

So then, a long time ago still, I said to myself, I like Apeface, and I want more. And then I found the Apeface/Zero Hour split 12″.

But upon obtaining the record, I was dismayed to find that Apeface had changed their vocal style. Now, instead of the harsh vocals, the singer had a screeching, reverb-heavy style. I guess the transition is reminiscent of Charles Maggio’s vocal change for the Protestant lp. I wonder if the singer of Apeface also had, what was it, throat cancer? At any rate, Apeface is still fast and seething and enjoyable, and there’s almost a hypnotic aspect to the way the vocals sound like they are reflected off a metal wall. (Apeface followed this split up with a 12″ all of their own. I got it, but didn’t like it at all. I hardly remember it now, except that it just couldn’t hold anything to these other releases. Also, they were from the bay area.)

04/21/2019 EDIT: Joseph from Lemming left a comment saying that he released the Lemming album, Follow Me, on bandcamp. Check it out!

But the other side of this record! Zero Hour were also from the Bay Area, and also perhaps Colorado. Female vocals. The drummer is the amazing Markley from Econochrist. (note: I’m probably off in referring to the bands in this post as thrash – maybe crust is more accurate… I haven’t listened to many crust bands, so I’ve never had a good feel for what the term meant to imply). Great lyrics, mostly depicting society on the verge of apocalypse, everything a cold, industrial wasteland, with greed, destruction, and intolerance reigning. The artwork is really nice, too. The singer, Whisper, mostly sticks to harsh screaming, but also ranges to more melodic (well, that’s not really true… less screamy) vocals. Each song is prefaced by a few spoken lines.

This record came out in 1995, also on Stinky Feet. And it’s on super awesome purple marble vinyl (similar to Moss Icon’s It Disappears). 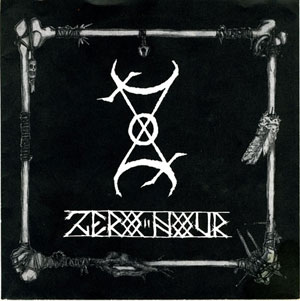 Four songs. Similar in temperament/outrage, maybe a bit more driving, with heavier guitars. Male back-up vocals show up more on these songs (I love when, in “In Shackles of the Human Skin,” he vomits in with “And you think that I’m the hideous one?” it’s perfect). The last song, “One of the Living,” is my favorite, and has a super heavy, heaving rhythm.

Zero Hour’s one of my faves. I included lyrics – though not all the artwork. This 7″ unfolds into a big poster, and it’s too big to scan (of a traveler, with a bag on a stick, a dog at his feet, and a raven flying behind him). The lyrics are also written in spanish, and I thought I scanned them, but guess I forgot. After Zero Hour, Whisper sang for Children of Barren Wasteland. I have their 7″. They were from Minneapolis. 1996. It’s good, and different, and I should probably post it. 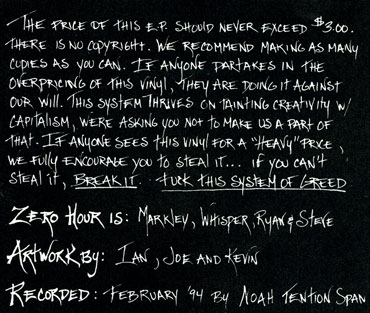 Lemming / Apeface split was released under two labels, Nothing / Stinky Feet Idiomism is now Nothing

I just re-released the full album Follow Me by Lemming.

thanks alot for the archive.

Zero Hour is great, but I’ve heard only their 7’’ yet. Looking forward to get along with Apeface and Lemming, expecting something good too.

I’m starting to like Apeface more than Zero Hour. Weird.

Yeah, I like Lemming. That link is weird. Here’s a better one.

Odd how it shows the split 7” as put out by Nothing Records.

I think the first Apeface song on the split 7” is good. I like the guitars - sort of sad and dark, while still being fast - and I like the drums at the end. The second song is interesting - unusual vocal phrasing. As for the split LP: it grew on me. It’s an odd mixture of abrasive/haunting. But is it interesting enough? They certainly can make a wall of noise.

Actually, I’m starting to like Lemming even more. And I don’t rate Apeface at all, especially the split LP.

Apparently, Lemming have another song on a comp cd called “How Lovely Nowhere Is”

You bet. Glad you like it, ‘cause it’s good. Yeah, I’ll get the COBW up soon - no problem. It’s worth it to have, because it is good. Her vocals are a little different on it. But that could be something of a production/mixing thing.

Thanks for that Zero Hour 7”. Her vocals are pretty awesome. Can you post that Children of Barren Wasteland 7”? I was told that it was good..

My lord that Second Storey Window 7” was a goodie. Never see the cracks!

↪︎ Reply to B. Brown
Founded 2005. Over the years I've posted writing, comics, ringtones, and stuff about maps, bikes, programming, pinball. And I had a robust music blog mostly about '90s hardcore punk (category = music).
Other music posts