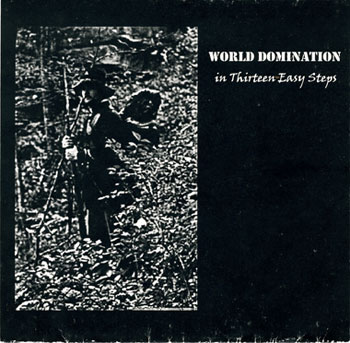 A friend of mine from Goleta put out this comp. Dylan ran Stratagem Ripcords, and played in Stratego (featured on the comp). I was into ‘zines in a most monstrous way, and so that’s, first and foremost, why I bought this. I had also seen Hellbender play a few years before, so I thought it would be cool to get some of their music. 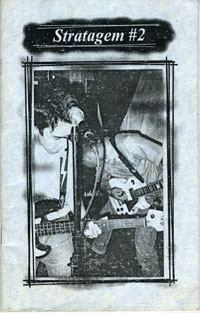 So, this is the compilation that accompanied Stratagem #2, printed July 30, 1997, titled World Domination in Thirteen Easy Steps. I’m not going to scan the entire ‘zine. So here’s a quick review: there are contributions by lots of folks from Goleta/Santa Barbara/UCSB. They each have a page to themselves, and contributed poetry, short stories, collages, and the like. They also supply Top Tens. The bands from the comps have pages (lyrics) that are scattered throughout the ‘zine. Dylan himself contributes most of the writing. He writes about books, nearly dying, records, grammar, and life. I like Dylan. We used to play soccer together every Sunday. And I haven’t kept in touch with him at all. There are also record and ‘zine reviews.

There was a time when I tended to resist the mature-sounding post-hardcore variety of music. While the vocals were often a relief (not the least because there is the potential for much more variety when it’s not all just straight screaming), I found the music to be watered down and, I don’t know, too appeasing. However, my sensibilities eventually broadened to allow in music that wasn’t best listened to alone (when on record, that is… I mean, maybe it’s just me, but hardcore can be kind of awkward). I didn’t start grabbing all the Elliott and Mineral records I could find, but at least I wasn’t straight making fun of what I deemed to be weak false-emo.

Coming into it I wasn’t familiar with any of the bands other than Stratego, Hellbender, and (from hearing the name around) Braid. And it wasn’t until a few years later that I realized this is quite a collection of emo-indie-pop (those dashes mean and/or and/or) bands. Like I just noted like five sentences ago, at the time it wasn’t exactly what I was into (for example: I was more into Mohinder, and less into their next incarnation, Calm – who, incidentally have a photo in this ‘zine. there are lots of band photos – I forgot to mention that), but suffice it to say this did comp get me into a lot of these bands! So dig it, in all its rocking, tearing, poppy, emo-ness.

I forgot to include images of the cover in the zip. So here’s the back. It repeats what I just typed. Yay. 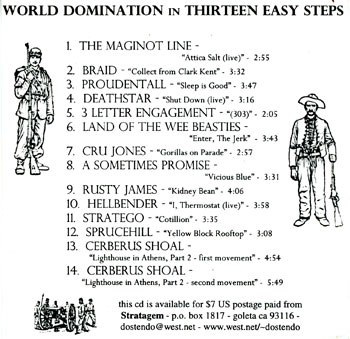 And here is the handy quick guide to the comp, written by Dylan. I found this to be helpful. Click for big.

My version of this comp is a CD, and I transferred it a long time ago, in m4a format. So that’s what you’ll get. Tell me if this is a big problem for you, and I can do it again, eventually. Enjoy!

Hellbender live? I never knew about this, very cool.

Cerebus Shoal was a great one. So catchy. Hellbender was from my buffer zone, and I think I like them a whole lot more now than I did then. ‘Con Limon’ was a great place for them to have stopped. Such a gross recording that doesn’t shimmer in the slightest, but it works and the songwriting is punchy. Great post!

Hey Dylan! Thanks for the comment! I was worried that maybe you’d somehow see this and then get mad at me for just throwing it up there for free for the world. But it’s a great comp, and I imagine you’re probably out of copies. People should still be able to hear it.

and I apologize for my review being mostly about my not-very-flexible taste in music. I’m not the best reviewer - I should probably be giving more detail about the tracks, etc. (I started to, and that’s why Cerberus Shoal is mentioned.)

Sapila messaged me yesterday and said he was wrong about it being in another format. He must have got the mp3s from someone else, and maybe they mislabeled it as 12”.

The only other Cerberus Shoal I have is Alvarius B/Cerberus Shoal - “Vim and Vigour”. Have you heard it? I think it has some good stuff.

I don’t think it’s going to take super long to run out of records for this site. My collection’s been filtered down over the years. But it’s fun to share. And I like having these songs to play on my ipod.

Wow. Ryan…long time, no see! Weirdest things I stumble upon when browsing the internet. About a decade after I release the comp, it gets a good review (and downloadable)! :) That’s very flattering…

I’m glad that the CD has been able to do some good for a few folks and get a few bands some exposure.

Interesting, I didn’t realize that I put it out on any other format than CD, either! Please do tell me about how you got yours, Sapila?

As for some comments/questions:

1) Cerberus Shoal, I believe, included the track (supposed to be one song, but the guy who mastered the comp broke in two, for some reason) on their reissue of “Farewell to Hightide.” Awesome song. That and the first LP are the best things they ever did.

2) Deathstar played a show with Stratego at UCLA and I loved them. They had at least one CD called “Strikes The Earth” that includes the studio version of “Shut Down.” Pretty good stuff and it comes with 3D glasses and artwork.

3) Braid (one of my alltime favorites) was TOO prolific, so they HAD to be hit or miss. Too damn many songs to make all of them spectacular. “Elephant” on the Ghost Dance comp was awesome, as was “Rainsnowmatch” 7”…they were essentially a post-hardcore band at that time with plenty of screaming to go with the melodic parts. I loved them in all of their phases, but the early years hold a special place with me.

I hope you’re doing well, Ryan. Nice site. I will bookmark it and come back whenever I can!

I’m living with my wife (Veronika), who I believe you’ve met and two kids, Adrienne (4 years) and Alec (1.5 years). They are super-cool. We’re in Chino Hills, which is 30 minutes east of LA. Hope Oregon is treating you well.

I don’t know about other Deathstar. I haven’t looked into it.

Yeah, I listened to some Braid stuff after this, and it was always hit or miss. There was one other song on a double 7” comp that I remember liking – either from Ghost Dance (which I should post), or Eucalyptus… I dun remember off hand. Those two comps really blend together in my mind. And who knows, maybe I’m thinking of Cap’n Jazz, anyway. Man, I probably really come across as a space cadet. I can’t keep it all straight!

This comp is great, didn’t know there was a CD version. This is def. my favorite Braid song… Do you know if Deathstar released anything else?