Okay, so this record is very special to me. 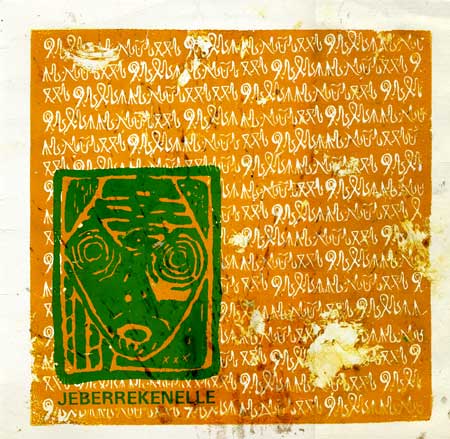 It’s one of my favorites ever: among the first batch of hardcore records I ever got; I have little doubt that I’ve listened to it far more times than any other record I own; and it was put out locally (in Santa Barbara), and one of the bands (Jeberrekenelle) had a guy who went to my high school. A high school friend sold it to me, handing me it on campus, and then he looked up and pointed and said, “Oh, and that guy right there sings and plays bass on it.” I was a surf-rat, and a sophomore, and the artist, Ananda, was a senior, in the “freak” crowd, with a misshapen army-green backpack covered in homemade patches and a long braid of hair coming off his bangs. (yeah, I became a bit enamored after hearing this record – though, honestly, I had noticed him before, and had wondered what he was up to.) A friend from elementary school, etc., Ben, played with him in some projects. But I wasn’t as good of friends with Ben at this time (not after a carrot was stuck in my sleeping nose at his birthday!), and so never hung out with the crowd. Though I did, years later, play in a band with one of his ex-bandmates..

Anyway, the sorry state of that cover may give you a hint about the attention I’ve awarded to it. To my defense, it was already covered in wax candle drops when it was given to me. But I spilled the water that smeared the silkscreen paint. As for the vinyl sound quality – it’s pretty good. It’s degraded a little bit from my many many listens, and, to my defense once again, that intro section has always been crackly and skipping like that. I’ve never had it play straight through correctly. It used to, however, skip at a slightly different part. It seems to me like the vinyl was pressed up against something, possibly another record, without its sleeve or cover. Probably the fault of my friend who sold it to me. But what are you gonna do… this record is mostly impossible to find. And at least it’s only at the beginning.

Also, my friend withheld the insert from me. I didn’t have it. I didn’t know it existed. I got this record in 1995, and it wasn’t until 2001 that I went up to John (the guy who put this out) and asked, “Say, that split you put out a long time ago, that didn’t happen to contain an insert, did it?” Lo, he had a copy right there. Things have never been the same. And of course, you guys and gals get the insert straight away! I scanned it and added it as a pdf in the zip. 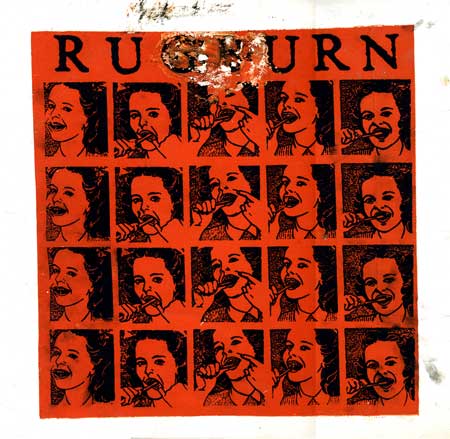 On this split the two bands trade off songs – back and forth and back and forth. To this day, and probably for ever more, I can’t listen to a song taken from the record without completely expecting the next band to chime in after the song ends. Both have since made available their discographies, and I urge you to find them. I got them off mp3.com about seven or eight years ago (so they were basically freshly-burned CDs with very simple covers, no inserts)… but I don’t really know if that feature is still around. But, at the least, all of Jeberrekenelle’s recordings are available to download for free on Ananda’s site, Mr. Dwab.

Rugburn eventually moved to San Francisco, changed their name to Iijima, and, I don’t remember, recorded a few more songs plus some live stuff. The Iijima material is included on their discography.

But discographies aside, I think it’s important to listen to the album as they intended (albeit in digital form). And so that’s why I present it here.

Rugburn starts off the record with “Lawnmower.” I think it’s a metaphor. Their lyrics are a bit more vague and disconnected than Jeberrekenelle’s. I remember that right after I got this record, they played a show, but I didn’t go because I couldn’t find anyone to go with me. A friend said to me, “I don’t wanna go; they’re just going to start off with Lawnmower, like they do every set.” So young, so jaded. At any rate, their music is very good: driving guitar, great drumming, some rocking, forward elements, somewhat reminiscent of Iconoclast, vocals kind of reminding me of 1.6 Band.

Jeberrekenelle (pronounced Hehbray-ken-yay-yay) start off by destroying everything: “Sleep/Panic Stricken” is a heavily textured campaign; a progressive arrangement covering the lives and loves of the past and the horrors of the future. Very weighty, fast bass lines, throaty bellows, nearly frantic drumming (Brian Tamborello, later of Embassy, Incurable Complaint, Ochre, etc… his dad removed my wisdom teeth; his brother was in Postal Service), and, I don’t know, fuzzy, unearthing guitar…

Rugburn’s next song, “Shunt Room,” is my favorite of theirs. That intro kills me every time. I love how it creeps up, with the bass and drums running up, with the guitar then coming in, spreading it all back down.

Jeberrekenelle follow it up with a feverish, more compact, song. In fact, they never make it past the title, “Page One of the Unmailed Letter, a.k.a. More on Like Love and Hiding” (despite all the lyrics left on the table).

Rugburn then end side one with “It’s O.K.” I said in the last post that this one would contain another song about the glories of self-gratification. Well, here it is. I remember my friend singing this in gym class, and we thought it was pretty major. On my own, though, I could never figure out all the words. Thanks, lyric sheet.

I’ll allow you all to review/describe side b for yourselves. The tone is set: go with it! Basically, I swim in Jeberrekenelle’s words. The stories are direct and real, and the songs manage to very remarkably wrap themselves around the words to construct narratives that you can feel.

Unfortunately for all of us, I have an automatic turntable, and so we don’t get the endlessly repeating end. I like records with this feature, and I wish I could turn off the auto mode on this player. On past players, I used to keep, for instance, the endless beeping of the Heroin seven inch going for a long time. The repeat on this Jeberrekenelle track, though, is a bit more abrasive, and so it’s tough to keep going for too long. If you can’t guess, it repeats “the same, the same.” Luckily for all of us, we can download just the repeated section – seven minutes long – from Ananda’s site. It’s the last track from the Live at KCSB recordings.