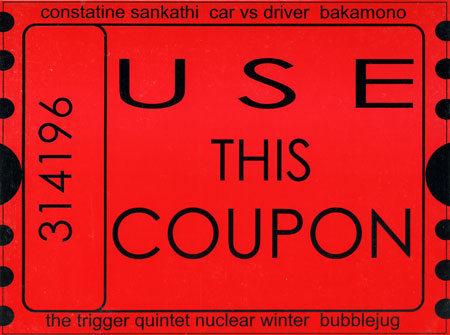 Like the record in the previous post, this one landed in my loving arms after emerging from a basement about four years after being out of print. Along with The Beatles and some other bands, Constatine Sankathi is up there, in the highest realm imaginable, with my favorite bands. But despite owning their discography CD, I never had any of their stuff on vinyl. I think I never tried too hard to search out vinyl because the insert with the discography is so comprehensive, and so I felt like I had everything I needed.

But I’m obviously not going to not buy one of their records. This 12″ compilation, Use This Coupon, released by Slave Cut Records, features Constatine Sankathi, Car Vs Driver, Bakamono, The Trigger Quintet, Nuclear Winter, and Bubblejug. Not a cluttered comp – one song each – four on one side, two on the other. Not a weak one in the bunch.

The Constatine Sankathi song — if you’re crosschecking the discography — is “Classical Part 2.” This recording is nearly a minute shorter than the Part 1 recording, and a bit grittier.

The Car Vs Driver song, “Dragonfly,” is melodic and driving, much like their song on the Amnesia comp, and also their last, and amazing, album, Out of a Silent Sky.

I must say that I disagree with the mastering of this record. After transferring it, and thus being forced to listen to each track and spike very closely, I think they mixed it too high (maybe that’s not the mastering part?). It’s not my transfer that sort of blows out at the loud parts, it’s the record. But anyway, it still sounds good, and it shouldn’t at all stop you from downloading it.

Side B has Nuclear Winter and Bubblejug, both female-fronted bands (well, not technically, since Bubbejug has both female and male vocals…). Nuclear Winter isn’t the tightest band out there, but it’s a good song. They remind me a little of Fisticuffs Bluff. Maybe it’s just her voice, though. Bubblejug make awesome use of overlapping vocals, each telling a distinct story. Insert as pdf, so you can follow along!

Edit (5/18/09)! I just checked my stizats and noticed that a lot of people still like downloading this. I gave it a listen the other day, and I thought the transfer kind of sucked – like, it seemed like the levels were peaking too often. What do you think? Should I re-transfer this? thanks.

“sometimes I have a hard time saying that I don’t like something, especially when I want to like it”

The Desert Jet Set had at least one guy (the singer?) from TTQ in it. I have one 7” by them that’s pretty good. Not nearly as awesome as TTQ, though.

C vs. D went downhill after their Deja Grateful LP. Members went on to Chocolate Kiss which was weird. Had its moments, but WEIRD.

No sweat, I dig your posts. I’ve never been one to mind the rules of what’s in or off limits in the ‘blogosphere,’ so post the 26th comp. I’ll look forward to it.

Ah, I tried to spend the month preceding these music posts doing research into what records had already been posted. But I guess I’m not very thorough… ah well!

And yeah (as per your post of the comp), maybe the Nuclear Winter isn’t super hot. But I still like it. And sometimes I have a hard time saying that I don’t like something, especially when I want to like it. Like you, I pretty much only played Side A of this comp. But I liked the idea of Side B.

Plus the other Bubblejug stuff I’ve heard is good. You can get their entire discography for free on last.fm.

And thanks, Trigger Quintet is great. So I’ll hit up that site.

Both the Use This Coupon comp and the 26th are great. I posted both a while back and found out, round about, that one of the guys I frequently talked to through the website was in Trigger Quintet and ran the Twistworthy label. Fantastic shit. http://thousandsofrecords.blogspot.com is his website. Drop him a line. I’m sure he can Trigger Quintet ya all the way.

I don’t have either of those. sorry :(

I’ll look for a soulseek program for mac.

If you have Soulseek, I’m Sapila. I’m trying to prevent uploading stuff, because my upload speed is like 4 kb/s. Meh.

Btw, you asked my on last.fm if I had any requests…

I haven’t mined last.fm much. But now I see that I should be spending more time there.

I can’t remember if I have any Driftwood. I think I found a 7” a few months ago, but I’m not sure (didn’t have a turntable for a bit, but was still buying records). I’m only luke-warm about Shroomunion. Something about their hard-rocking hardcore…

Oh, and Bakamono suck. I have two CDs by them. Boring.

…./Driftwood. I found their song a bit dissapointing.

I have everything the Trigger Quintet released.. (7”, and 2 comp songs). I can upload them, if you want.