This post has something for everyone! As long as everyone loves really screamy, harsh, emotional, and chaotic hardcore. 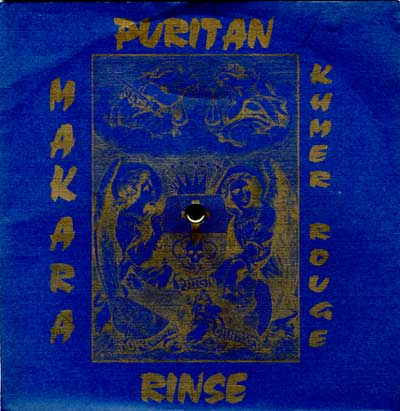 Here’s a comp 7″, called From Stars Come Hearts, put out by Witching Hour in 1997. Limited to 500, or so I’ve heard. It features one song each by Makara, Khmer Rouge, Rinse, and Puritan.

As all the bands are brutal, muddy, chaotic, noisy, and screamy, I kind of consider this is as the predecessor to the Antipodes comp (wouldn’t you agree?). Clear yellow vinyl, and housed in such a way as to make it very difficult to keep clean; it’s held into the cover by a thronged pin, like the pin that seals a manila envelope. And there’s no doubt that pin’s rubbed up against the grooves. I had to play the Puritan song about ten times in order to get it to play through with a skip. But keep in mind there are some pops.

Feel free to read the insert and then make decisions to change the names I’ve chosen for these tracks. Some are ambiguous. Also, when you see the edges cut off on some of the insert pages, please remember that it’s because of a giant staple in the booklet that forces a half inch margin.

Rather than leave you all hanging with just one song by each band, and being that I am way into bonuses, I’m also throwing in the Makara 7″ (on Hymnal), Khmer Rouge 7″ (on Witching Hour), and Rinse 7″ (on Concurrent)! Sorry, I don’t have any more Puritan… but if anyone else does, please tell me. 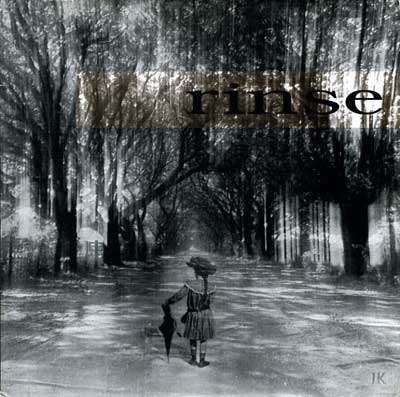 Rinse. I came across this a few months ago while browsing the 7″ inch section at my local record store (which seems to be the only section I ever browse). At the time my mind wasn’t placing the band, but I knew it sounded familiar. So I slapped down the dollar and gave it a good home. Then I remembered where I’d heard Rinse! Way cool; I have such great instinct sometimes.

This seven inch is pretty dang good. And it comes with a great insert. Full lyrics, art, and a page by each member of the band. The lyrics are of an intensely personal nature. If I had to find a theme, I’d say it was lousy father. The last song features female guest vocals (and I’m guessing she sang for another band.. maybe someone can tell me which one. She actually sings – not screams – the backups). Pretty intense record, especially if you follow along with the words. Music-wise, they’re not breaking any new ground – many fast parts, some chugging, some Rorschach-y riffs, splintery, heaving guitars, and so on. But it’s totally good. 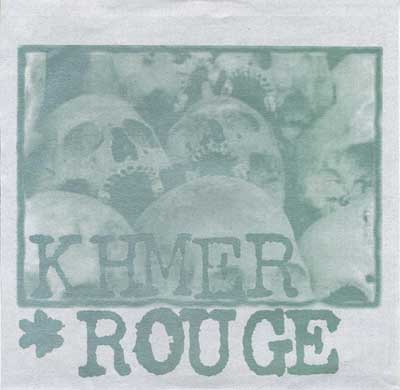 Khmer Rouge’s first song starts off with the same drum beat as their song on the comp! They’re pretty spastic, muddy, and brutal. And once in a while they bring in some Unruh-y riffs (Unruh from the Enewetak split seven inch, not the lp). And “Over and Out” is like if Constatine Sankathi went completely off the deep-end. Anyone else hearing that? Feel free to dispute my track titles. The little green insert confuses things. They have a song titled “Song 6”, but there definitely aren’t six songs on this record. So.

I got this record to review for Heartattack, and I remember not giving it the hottest review. Sorry. Now I like it more. Their name is still not the greatest, though. But at least they supply a little history note about the Khmer Rouge. 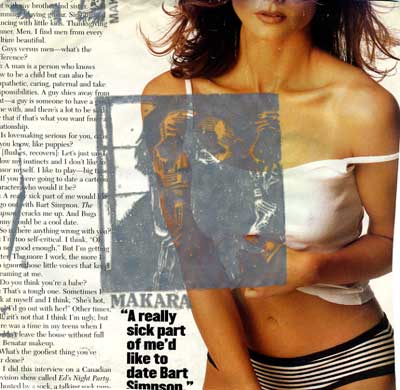 The Makara discography is still available. But here’s the seven inch anyway. They’re my favorite band of the bunch. In fact, they’re one of my favorite hardcore bands. I love how they have feedback running throughout the entire record. They bring such a sense of urgency. It’s like they’re possessed by an insane disease, with the result being this insatiable sound that emerges every time they come together. They can’t help it. I don’t know; that’s just the feeling I get from them. I split the sides into tracks. I did my best; there are no actual full breaks.

And there is no insert. They bit the Mohinder – The Mission 7″ cover style: their name and stuff screened on a random page from a fashion magazine. Of course, Makara had members of Mohinder, so we can excuse them! Plus we’re not the police, so who cares. If you want the lyrics, get the discography. And the discog is remastered, so it sounds a little better. Though I just compared them side by side, and the difference isn’t huge. Plus there were even some of the same snags in the recording (so it’s not just my vinyl… weird). After Makara, some members, most notably, went on to Ruhaeda. The Ruhaeda lp is very amazing (it was put out on CD, too, and I had both, but then I lent the CD out and never got it back… I might transfer the vinyl anyway, just so I can have it in my earphones).

Here it all is, in one beautiful package:

Sapila, i would greatly appreciate the demo, as i once had it and loved it, ALSO- i have the original Winterlong demo CD {drummer from puritan, and am willing to post it when i figure out how, any pointers would be great. or email me, i will send discs for the postage. every fan of puritan should hear winterlong.

wow thank you.it may not be all of it, but besides the demo cassette this leaves me with all i know of from this excellent band. Timeless band. thank you so much Ryan, and all others that post this beauty.

Brian, this post has a Puritan discography. I’m not certain if it’s everything, though: http://metrosea.blogspot.com/2007/11/puritan.html

And it’s an old post… I’m not sure if the link is still active.

i am a longtime fan of Puritan. I have some but cannot fid all of their material. can someone please tell me where i can find / buy the recordings listed above? Please. Thanks.

Hey, the girl that sings on that Rinse record was in a band from the Florence, SC area called Shirley Temple Of Doom. I think some of the guys in Rinse went on to be in Prevail, too!

jd - yesterday I found a copy of the Makara 7” with your label’s cover! I feel like I’m more complete now, as a person.

Cool. I don’t think I’ve ever come across the label’s version.

Yeah, I didn’t mean that they were biting Mohinder - just that they bit Mohinder’s seven inch’s style. if there can be a distinction. and I guess “biting” isn’t the best word…

I released that Makara record on my label. FWIW Most of these records had printed covers (aliens in jars) with silkscreens on the back, so this is probably one of a fifty or 100 that were put together by the band themselves. Not so sure anyone was “biting Mohinder” - as you note James and Chris were in Mohinder. That was just how they liked to do things.

I hate that split.

Yeah, no idea why I never bought the Orchid/Jerome’s Dream split. Many copies sat right in front of me for weeks on end while at work, and I failed to pick one up. Neil Perry-wise, are you talking about that mini-CD they put out? If so, I have that. And it’s so-so.

Yeah, it’s basically a blog, and yeah, there are other folks looking for this stuff (that shouldn’t be too surprising, should it?). And check out the “tunes” links to see other people doing similar things.

Amazing, stumbling upon this. Like a slice of screaming, bloody, heaven. I was searching for information on the Makara split with Sharazad… trying to see if it had an insert. I wonder if there are other shmucks floatin around cyberland looking for this kind of blissful noise? Guess so. Awesome blog (is that what it is?)… there really should be more info. on these sounds. Thanks for sharing! For shits and giggles (share yours?): 5 songs that fucked you up (in a creative way):

I had no idea there was still an audience for this music. Love, Stranger.

Holy shit, this is some post man! I’ve been meaning to check Khmer Rouge out for a long time.

Great release. Thanks for the link as well. as soon as i get my shit into gear i’ll link you up as well. great blog.

I like the Makara songs a lot. Like a screamo Mohinder (i.e., progressed into the next style of hardcore/emo… or something). Definitely right about the feedback, too.

Yeah, different color. Mine has the stars, too. But they are on the plastic sleeve. Also, I didn’t scan the back cover, which was pretty lame of me. I’ll do that, and post it here in the comments.

I had to run to work - couldn’t compare the track listing just yet. But yeah, I listened to the first five seconds of Dark/This is Medicine, and could tell it was a different recording.

Also, here’s the limited version of the cover:

The song “This is Medicine” is a different (earlier, I think) version of “Dark”.

Darn it, I had that originally as the title, but then I changed it, and then I fell asleep and forgot to make a final decision. I’m reuploading the zip with the fix.

The Puritan “discog” names the song from the comp as “This is Medicine.” Yeah, post the track listing..

This doesnt have everything, I think. If you want, I can post the track list for each record. I hate when people just tag the album as “Discography”..

By the way, the title of the Khmer Rouge song is “Times Past But Memories Not Lost”

I just found it on Damn Those Blood Sucker…

I have everything Puritan released on slsk (or I can upload the mp3s for you): Demo tape, split 7”w ith December, Split 7” with Officer Down, and the split 12” with Reversal of Man. Fucking amazing band, really heavy.