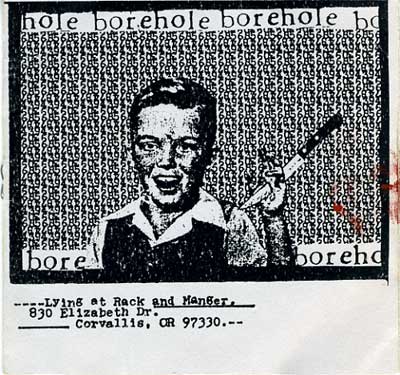 This was a random one that one sunny day landed flat on my giant mahogany desk at HaC HQ. Short story very short: it was a hit! As far as I can tell, neither of these bands got much attention. But in my opinion that inattention was undeserved, and so this post is my own measly way to provide some rectification. This is the Borehole / King Supa split CD, put out by Lying at Rack and Manger (Corvallis, Oregon), in 1997/98.

Borehole’s what first hooked me to this record. Maybe because they are the first band on it. I don’t remember what I wrote in the original review, but I’m sure it was better than whatever I’m about to put down. They’ve got the first twelve songs. They’re almost like Thumbnail mixed with some Manumission… or something. I don’t know, nor do I really care. There’s melody, brutality, technicality, repetition, fast, slow, soft, loud. It’s pretty relentless, and the songs flow from one to another really well. The last few are from a different recording. I remember “Collapsing Buildings” being my favorite, all for the build-up to the breakdown around 1:00. All in all, a pretty great band! 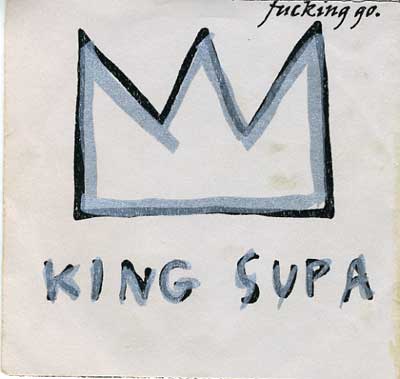 King Supa come out blasting fast. They almost seem sped up past the right speed. But this is from a CD, so that’s not possible. Still, that drummer’s like a turbo robot. They have an Assfactor 4 vibe going on. But also much more: there’s some surf rock, harmony, a lot of energy bursting in every direction. Short songs, persistently hyper-fast. It seems like they are having fun.

my name is brady. I was the bass player in borehole. i appreciate the kind words about our band. im working on trying to get another one of my old bands gun-pro together. if anyone has any questions about borehole, insect, or gun-pro i would gladly answer them.

king supa has made my week. i sorely miss bands like that…

Haha! Now that I get it, I think its ingeniously subversive.

Surely I deleted a part of my comment without realizing.

I ran into a guy last night that was heavily connected with the Gern Blandsten crew. and we were at this bar drinking some Stellas and for the first time in my life, after talking about it 10 minutes before, and Embrace song played. Money. It was some serious serendipity.

This whole music thing is giving me a serious buzz.

Yeah, I made it complicated.. sorry about that! But it usually doesn’t eat comments, at least as far as I know.

I’m just not really into the word “comment,” so I was trying to keep it off the front page. But I’ll replace it soon, I swear, with something intelligible.

okay, i guess it didnt want to leave all of my comment. Choice!

Something about awesome King Supa artwork, and becoming more aware of the southern hardcore scene. I missed out on a lot of that stuff. Thanks Ryan!

Forgive me, It took me this long to figure out how to leave comment. >embarrassed

I remember buying 10 copies of this from someone years ago for my old distro. I ended up giving them all away for free because I wanted people to hear this cd. The Assfactor 4 reference is spot on because this was the only reason I bought it in the first place. Whenever I used to read Heartattack or Maximum Rock n Roll and saw a A4 reference in a review I had to buy it. 80% of the time they were shit! If anyone still has a copy for sale contact me thru’ Poet.

it is pre-orchid, but jeff played bass in king supa, drums in orchid. (He’s played various instruments in lots of bands)

Tom: There were/are tons of good bands from NC! Tonka, Rights Reserved, Unherd, Strait Up… Just to name a few. That state produces so much great music..

Hey Tom…I’ve actually got about 30 copies myself, and I’m pretty sure Jeff has many many more. I’m just kinda holding on to them to give to people when/if they show any interest in my former projects.
Seems like every 5 years or so we get a review or an interview with a Pakistani ‘zine…or something.

Glad that people are still discovering the glory that was the Supa!

(Oh, and ‘turbo robot’ may be the greatest compliment anyone has ever paid me…)

Thanks for the kind words Ryan. And I’m glad you posted it for all (who dare) to download. Honestly, Assfactor 4’s smoked out ep is still an awesome record… not to mention in/humanity’s nutty antichrist. I think those are the records people should remember from SC at that time.

Yeah, we were sort of the house band for Jimmy’s for that summer (what year was that?). It was pretty awesome, actually. Lots of fun and good music. Somewhere along the line I broke my foot skating and we all went to school in different places, etc. So, no tour. Salane went on to do Orchid and Panthers…

If anyone really wants a hard copy of the thing, I think you’re nuts. Download it. And if you are really nuts, I guess you can drop me an email: supaindustries@hotmail.com. Yes, I’ve had that ridiculous email address since the band was around.

I remember when I reviewed this for heartattack, I tried hard to convince everyone to order it.

And re-reading this post just now, I had to do some slight edits to the text. I can’t stand reading “blank meets blank” in a description. And I don’t want to make it seem like supa’s just tacked on, since, in my opinion, they are equally awesome.

Anyway, thanks for the info.. and for finding this post so fast!

supa played quite a few shows in the area at the famed “jimmy chen’s house of emo-violence” (a frequent hangout of chris bickel from in/humanity, or maybe he lived there, who knows) and the local vet’s hall. They weren’t really together long enough to do a proper tour.

pencrush: awesome! When I first heard this I wasn’t making any connection to assfactor 4. it just sort of came to me yesterday. I’m not really into that band.. I like king supa a lot more.

Tom: I would go back and forth between liking you guys best, then Borehole, back and forth. For this post, I basically just got lazy toward the end.. but I tried to give you the honor you deserve. plus that borehole description is pretty stupid. Anyway, maybe you should put down your contact info in case anyone wants to order a copy from you? I didn’t know any were still around, and that’s why I plopped it up here for free. hope you don’t mind – better that more people hear it, right?

Did you guys ever tour?

Wow. This is better than what I expected. NC/SC had sooo many great bands.

wow, I can’t believe anyone else ever actually heard this! King Supa were made up of my brother and two of my good friends, and practiced in my basement, so I’ve always been a fan. King Supa was from Columbia, SC (the same location as Assfactor 4) and was basically a summer project for the 3 members over a couple of summers. I think they were originally going for an assfactor sound, so it’s interesting that you make that comparison.

keep up the good work.