In Memory of Jason

This is one of two commemoration compilations that I own. Both are great (the other is the We’ve Lost Beauty lp). 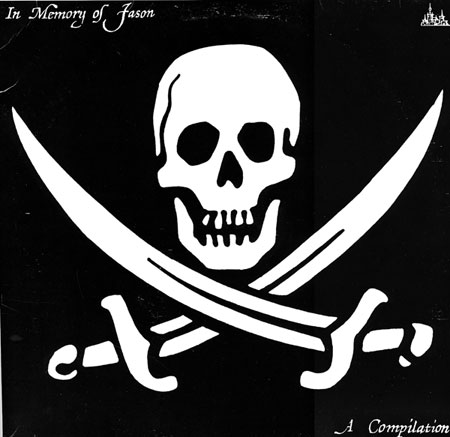 This double album — In Memory of Jason — is dedicated to the life of Jason, who died much too prematurely at age 21. The insert states:

This recorded is dedicated to the spirit and memory of my brother, Jason Jon Fleagane.The bands on this compilation are not only Jason’s personal favorites, but they are also in the spirit of what flowed through this inspirational individual.

Jason gave all that is humorous, generous, and kind back to his family and friends. His combustible, spontaneous personality truly made him one who is small on the outside, big on the inside. Jason was a pioneer who created Monopoly Records and Resolution Skateboard Shop. His creativity served to promote unity and friendship in a place where these values are hard to come by.

At the young age of 21, Jason pursued art, skateboarding, music, architecture, brought a family together, friends that will never part, and a memory to last a lifetime. I will miss him for the memories that we cannot make.

His own band, Pottyface, featuring him on drums and Alex on bass, have short tracks at the end of each side. I didn’t know what to name them, so I just named them “Pottyface One” etc. They are low-fi garage recordings that, I think, punctuate the record in a nice, meaningful way.

Jason obviously had great taste in music; featured is quite a remarkable collection of bands. And, like most comps, it serves well as an intro to bands you may not have heard before. Here’s the line-up: Angel Hair, Babyland, Clikatat Ikatowi, Crash and Britany, Driftwood, Evergreen, Godhead Silo, Honeywell, Jackbarber, Karp, Reach Out, Rice, Still Life, The Saw. 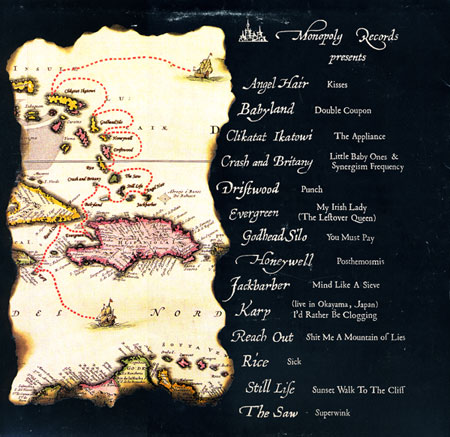 Many of them take advantage of their ample wax-space. Each side has three or four tracks. The first three songs are aggressive in nature, but then Honeywell comes in and spaces things out. Afterwards, which the exception of Angel Hair, the bands take more opened up, introspective approaches (contradiction?!). Well, maybe Karp doesn’t either. Some notes:

Rice, of course, sing about rice. I first heard this song on a mixtape a friend gave me. So it was a fun surprise to have it also on vinyl. The song can also be found on their discography, Fuck You We’re Rice.

Godhead Silo’s track can be found on the Scientific Supercake album.

Reach Out’s song is absolutely brutal and spastic and explosive. Fittingly, they seem to have upped the recording level to 15, or something — it’s slamming against the ceiling. Their song kind of reminds me of Incurable Complaint (a Santa Barbara band — I’ll make sure to post them eventually).

The Evergreen track is lovely. I like music that reminds me of lounging on a beach. I’ve heard the Evergreen 7″ on Gravity, but I don’t have it. From what I remember, this song is different.

I’ve been looking for more Crash and Britany, since I really like their tracks on here. But I haven’t come across anything. This record used to contain a nice big crack and a skip toward the end of their first song. But I’ve managed to mostly clean it away. Now there’s just a pop. I like female-vocaled emo bands. I don’t have enough of them. I know there’s one on the Use This Coupon comp. I’ll make sure to post that it soon.

Clikatat Ikatowi starts off sounding like Still Life, but then the drums kick it up and then it’s unmistakably Clikatat!

Anyway, great comp, great bands, great tribute. I’ve included in the zip the entire insert in pdf form! In real life, the insert is made of a nice vinyl paper. It’s heartwarming to see the artwork and the kind words for Jason. It’s a big file, so if you feel like sharing it elsewhere, feel free to put it up on mediafire or wherever. It’s not like I’m looking for hits and googlemoney. Free love!

In Memory of Jason – A Compilation

The In Memory of Jason compilation was released by Jason’s brother Josh under the Monopoly Records name. They owned a skate shop in Thousand Oaks and then started Monopoly with the release of the Driftwood 7”. His family participated in writing the insert tribute.

I’m not sure. Some things can be gleaned from the insert. (I don’t have it in front of me) Doesn’t it say he ran a skate shop, played in a band, etc.? Other than that stuff, I dunno. But maybe someone else does.

I was wondering about In Memory of Jason and specifically Jason & who wrote the dedication. Does any one know anything about either of them?

thanks for this! never heard of this comp, but own records from most of the bands. some great stuff on there, can’t wait to listen to it!

Then I really don’t know which one I had. Possibly the first. It was certainly a little mellower, I guess, than the lp, with songs I hadn’t heard before. But I thought it was great. I just figured it was later stuff, since it sounded, to me, closer to the Kool-Aid songs than the lp songs.

There is a Honeywell live cassette released in 1992. And there’s also another live set from 1993.

The first is more emo, reminds me of those cheesy late 90s bands, like I, Robot. The latter is from their LP days. It rules.

Hilarie, there was one Honeywell live tape they released – I think around the time of the electric koolaid record. And I believe there are six songs on it. Then when I saw Volume 11 one time (at a show in goleta - were you there?!) I asked bobby if he had it still, and he said they were working on remastering it and re-releasing it. But I dunno if that ever happened.

Know what I’m talking about? I found the songs on napster, back in like 1999. And I don’t have that computer anymore, so I lost the songs. I really liked it. Some of them were longer songs - five or six minutes.

The Reach Out videos are from the sxe days… That’s why they suck so bad.

I don’t know what Ryan has in digital form. We have TONS of STUFF and I’m not even sure he knows what he’s got. I know that it’s hard to find when I want it, that’s for sure. ha. If there’s anything specific you want, tell me and I;ll make him dig for it! He secretly loves a reason to go on treasure hunts since the stuff doesn’t get attention otherwise.

Incurable Complaint is good.. But def. not as good as Reach Out.

The Honeywell song on this is ridiculously good.

Nice! Rice! I remember buying their mess when I was in high school, taking a chance and thinking it would be pop punk since it was on Lookout! Records. ‘Twasn’t, but crap I loved it. I haven’t listened to them even once so far this century, and running their songs through my head right now, I’m not sure I’m still into them…

…But, bands like Clikatat only get better. My god.

I’ve noticed that there’s a lot more of that on youtube these days. I remember searching for live stuff a few years ago, and not coming up with much. Since I didn’t get into these bands until 1995 or so, I just hit the tail-end of a lot of them. So I used to trade vhs tapes of live shows, in order to get a chance to see them. They were often a little disappointing, to be honest. I’m not sure exactly why; maybe video seems more removed than plain audio recordings… or wait, maybe it just accentuates the distance between me right now listening to the music, and them back then creating it.

Did you see the Reach Out videos? Maybe it would have helped if the sound was better, but, uh, I didn’t think it was that awesome. On record, they sound like such a cohesive unit that I sometimes imagine them all together, as a single unit…

Wait, now I think I figured out my issue: I don’t like the videos where the band is on a stage. Angel Hair, Frail, etc playing on stages is boring.

Do you have that honeywell live tape in digital form? I used to have it, like 7 years ago, but I lost it.

we watched a bunch of live videos from these bands on youtube today. I spent a lot of time scratching my chin and saying Holy Shit because woah, somehow that was 15 years ago.