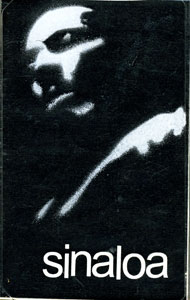 One time I ordered the Ettil Vrye/Tipping Canoe split lp, and the guy with the stash, Pete from Ettil Vrye, also threw in the demo tape of his new band, Sinaloa. I was excited to hear the new band, since that Ettil Vrye stuff was, in my opinion, the best new hardcore I’d heard in a good many months. But, I don’t know, this demo didn’t get a lot of plays on my tape deck. It didn’t quite compare. However, it’s a demo! They’ve put out a lot since, and people are into them. Plus I think it falls in line with the tapes I’ve recently posted – kind of the same time period and similar sound and feel. Three of the songs from this demo were later re-recorded and put on the Fathers and Sons album. And Hardcore for Nerds recently posted the Sinaloa split with Ampere.

So here you go. I guessed this as being from 2002 (I’m starting to recognize that it’s not that I’m lazy, but that I am developing a fear of googling things – I think I’m afraid of what I may find, even when such fears are ridiculous.. that’s why I guess so much, and then just wait to be corrected in the comments.).

I am going out of town for a few days, but will be back next week with some more posts.

Awesome. I am psyched to hear that.

I am checking the Ruhaeda right now.

Gabba and Blend and anyone else, I never posted that split, but I can and will! I’ll try to get it up here this week.

blend - I have the Tipping Canoe/Ettil Vrye split 12”, which thought I downloaded from this site, but I can’t find the post.

nice. this is great. I will listen, but with a grain of salt as I tend to like their newer stuff more.

I have never heard Etill Vrye though. My friend Sean says they were awesome. If you have anything good by them I would love to hear it.

cool, thanks for this. When I put it on first I had to go check that Sinaloa weren’t playing in my basement - not really in the cool, DIY hardcore show in some kid’s basement sense, but in the weirdly subterranean sound of this mix. (Also, Irish houses tend not to have basements anyway).

Interesting to hear the Sinaloa sound in development (haven’t heard the first album myself, actually). The whole origi-emo thing is a lot more obvious on this - at the start of People Mover I got the feeling they were listening to a lot of Current.