I think it’s funny when people go on to describe Mohinder’s music as being symptomatic of the tensions and paranoia arising within Silicon Valley’s technological and economic ascent. I’m not one to argue with such assumptions, but I am one to shrug at them. However, if I were of a different spirit, and felt like making up funny postulations that make me sound like a know-it-all to those who don’t know I’m full of shit, I would venture to submit that Ruhaeda (whose 2001 album is featured in this post!) continued that tradition, and managed to capture the persistent angst and wild speculations surrounding the build-up to the supposedly-apocalyptic Y2K. Except instead of Y2K being a way lame and disappointing bust, Ruhaeda’s tense, repetitious rhythms, jazzy infusions, and melancholic strains that at a specified moment are suddenly punctured to bleed in a maelstrom of speed and fury are acting as a sort of coulda-been. Basically, what if when the time came everything fell apart? Well, Ruhaeda provides such coverage. 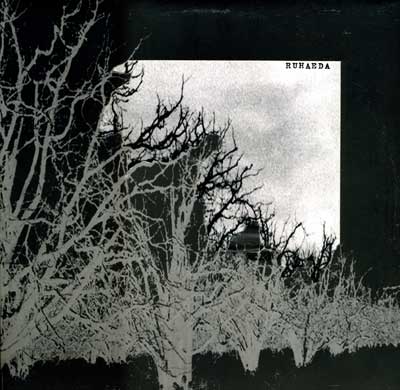 Ruhaeda were around in 2000 to 2002, and featured members of Makara and Under a Dying Sun. I used to have this album on CD, also, but I made the mistake of lending it to a really stylish romulish guy who only listened to At the Drive-In and I thought could do to hear some other bands. And so I had to transfer this from vinyl. The song order is different on the vinyl version. This album is all they released (but I’m guessing there’s a demo out there, and if anyone has it I would really really like to hear it, please), and it was a multi-split release from Unfun Records, Level Plane Records, A Strictly Amateur Films, Ape of Essence, and Pictora Pilota Records. I don’t know how many records were pressed, but I don’t think a lot, given that only a few months after this came out I had to trade a distributor the Ghost Dance comp for his last copy (I came into a few copies of that comp, so this was okay with me).

The day after Christmas in 2001 I took a bus from my parents’ house to Oakland, CA to stay with some guy I met on Skylab Commerce (anyone remember that?) and see the Ruhaeda show that he set up in San Jose. It was Ruhaeda, Sutek Conspiracy, the Get Get Go, and maybe one other band. Ruhaeda’s set was terrific – notable for massive amounts of pressurized energy released in short, tight bursts. They ran out of steam after about 12 minutes or so. (what a metaphor, eh? really says something about this music we like listening to.)

I brought my dad’s camera along with me. This marked my first time ever trying to take photos of a band’s set. I basically just held the camera above my head and hoped the guys were in the viewfinder. It turns out they mostly weren’t. Here is the best of the bunch. 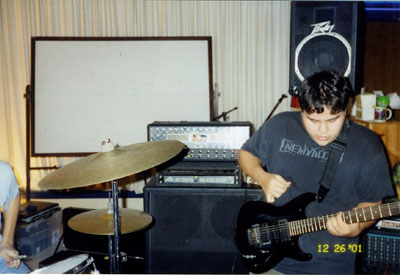 One of my favorite records! It’s totally great and it fits in along a progression, of sorts, stemming from Mohinder and then Makara. The record also fits in a great sound ensemble, made from field recordings and other sounds.

Update: Ruhaeda’s drummer, Jerry, uploaded this live set. It’s from January 22, 2002, and was aired on the UC Santa Cruz radio station, KZSC. It was one of their last shows, and has a couple songs not on the album. Ruhaeada – live

Another update: Leo acquired and then uploaded their demo! Download it here.

I have that info in an email from the drummer, Jerry! This info is from 2008:

“Matt (guitar/vocals) still runs the label Strictly Amatuer Films, which has put out quite a few records at this point, the Ruhaeda being one of the first. He currently is not playing any music. www.safrecords.com

Nick (bass) plays in the band Dmonstrations, they had an album on GSL a couple years ago.

DuWayne (my brother + guitar player you took the picture of) played in Takaru and Burial Year after a few years of not doing a band since Ruhaeda. He is putting together a solo record not unlike the track he did at the end of the Ruhaeda record. We have also recently started our first band together since Ruhaeda. Solo project link: http://www.myspace.com/aurald

I’ve played in a few bands since, Under a Dying Sun; Inventing Edward; No Dice; Bullets In; and I’m currently in a group called Touch Committee, and the as-yet-unnamed group with my brother. Both those bands are more of the indie-rock persuasion. http://www.myspace.com/touchcommittee”

So what ever happened to the band members afterwards? What bands are they in now? I’ve been wondering for over 10 years

Yeah, totally. Upload it! I’ll edit this post and add the link.

hi! is anyone still interested in the demo? i have it, got it from some guys on skylab! : ) already transfered it to MP3, i only have to upload it on mediafire… just ask me! : )

I have about fifty copies of the LP. Not kidding.

Spencer, if you ever get a way to transfer tapes to computer, I’d be into hearing the demo.

I have their demo and it was pretty raw from what I remember. If I could transfer this to mp3, I would, but I can’t so…..sorry.

I totally remember skylab. I got so much good shit for cheap on there.

Good blog. Keep it up.

I saw these guys in early 2000 with The Now and some other groups I just can’t remember. They were pretty awesome, and it was a pretty awesome show @ the old Fun-O-Rama in Philly. Definitely a band worth checkin out… thanks for postin’!

When I was ten, this prick named Iben Browning predicted that the New Madrid fault was going to rock Missouri back into a protoplasmic swamp on Dec. 3rd. Everybody bought tons of surplus food and water, and only half of the kids showed up for school and then nothing happened.

The line “Mr. Browning has a prediction, we’ve all been told,” made it into an Uncle Tupelo song that became a college indie hit. Tupelo split and later became super rock star band Wilco.

I’m convinced that Wilco’s music is symptomatic of the depressing shithole that is the midwest. I’m full of shit, too.

this is pretty good, I’ve listened to it once but I might need a few more listens to really get into it. Certainly anything on a Mohinder - Makara progression line is good for me!