Today I filled my suitcase full of stereo stuff and traveled over the next state over. I felt pain a lot while hauling it the final blocks to my house, but then I set it right up, and now I am happy.

Since I said in the previous post that once I got myself a new turntable I would start transferring, and then posting transfers of, some records that I like and think people would want to hear, I then got myself one and then did all that. So here, hear, etc.

Here’s a good record that I haven’t seen around lately. 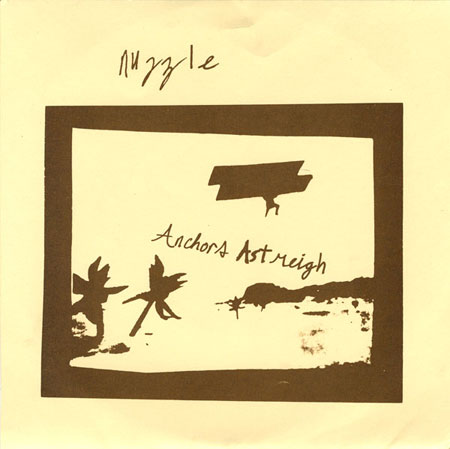 If I remember right, I got the Nuzzle – Anchors Astreigh 7″ upon the recommendation of a friend, after having shared my like for the Benchmark 7″ (Note: different Benchmark from the one that’s on the Education Comp. put out by Mountain Collective – this Benchmark put out a 7″ on File Thirteen, and I used to have it, and I lost it somehow. I think maybe I let someone borrow it, though I don’t, and never did, have any recollection of doing so… it’s one of my favorite records, and I’ve been lazily looking for another one for years) and the Frail 7″. And I think it was a right on recommendation. They are much slower than those two bands, though. But they have big, fuzzy guitars, a bit rolly and even sometimes maybe rocky; and they have fairly similar vocal styles: of a mewly spoken voice, with a staccato scream that can tip to a cracking shriek (like Native Nod, too).

Nuzzle was from Rosemead, California, and around from, I don’t know, 1993 to 1995/6. This record was put out by YouthStrikeChord (recorded by Matt Anderson, from Heroin; photos inside by Bobby from Honeywell. They put out some splits that I don’t have and have never seen. And a seven inch that Ryan from Honeywell says was recorded at the same time as this one, and is totally great. And a full length, put out a little after this record, called Follow for Now. I haven’t heard it, but I really want to. I saw some store selling it on ebay a month and a half ago, and I bought it, and it still hasn’t arrived, and that’s lame. And then in 1999, long after they broke up, they released another full length, on Troubleman, San Lorenzo’s Blues, which I bought on CD. I’ve only listened to it twice since then. On the first listen I was waiting so anxiously for the songs to explode with the energy of this 7″, but they never did. And I came away disappointed. On the second listen I looked for melodies that were at least comparable to this record. They were almost there. It just seemed kind of slow and boring to me, with vocals that whined but didn’t scream. I should try probably try it again.

It’s four songs, and I included scans of the cover and insert. Quite a crackle to the record. I don’t remember it ever being very clean. And there’s some major noise on the recording, so you just have to wade through it. I think it’s nice. I like their sound. I love the first song (especially the drum-intro). I guess I was kind of a square at the time, but I remember being shocked when he says, “To be drunk, to know, still, where…”

Great record. I had to buy the self titled 7” along with this one, Follow for now and No mas so I can rip them on mp3’s since there hasnt been anyone that has.