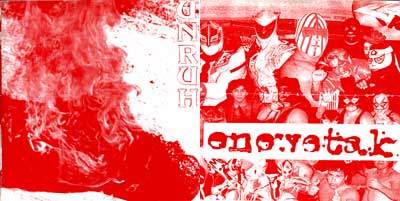 Split 7″. I like both of these bands. Both play fast, harsh hardcore, with super fuzzed out bass and brutal vocals. Unruh’s drumming is especially fast and loaded with rolls. After I got this split I ended up getting a bunch more by both bands.

I saw Unruh play at the pickle patch. I remember the guitar’s tuning/fuzz was set so that he could play an open chord and it would have zero sustain – it was just a big crunch. I saw Enewetak play at Goleta Fest II. They were awesome. I was happy that they played one of their one second long songs.

This split came out in 1996 on Feast and Famine (Arizona label). Unruh was from Arizona, and Enewetak was from the City of Orange, California. Three songs each.

The Poet You Never Were recently posted the Unruh/Creation is Crucifixion split 7″ (plus a ton more).

Listen to a song by Unruh:

p.s. Does anyone know how many of the Manumission “Tremor on the Line” records (Repercussion Records) were released with the cover screenprinted on cardboard? I found one today for $2, so picked it up… even though I already have that record with the other cover. I don’t mean to sound like a total record geek; I’m just curious. It looks cool. Also, would anyone be opposed to a Manumission post? I have Diego Rivera 7″, Binary Lung 7″, and Tremor on the Line 7″ (I wish I had the split with Crudos!). All are very great, and everyone should have them. But maybe everyone already does…

I have been looking for Manumission as well. It is near impossible to find their stuff online, please do a post of their tunes! Thanks in advance!

I have one with a yellow manila cover, and one made out of cardboard (like, thick cardboard with the cover screened on to it). I’ll check the vinyl to see if I can figure out if they are from different pressings. Do you know if the yellow was the second? The cardboard version definitely strikes me as an early one.

Yeah, Manumission! One of my favorite political bands. I know there were two pressings of that 7”, I have both of them. The cover of the first one is a yellow manilla envelope and the other one is white.

Thanks for this split! Post some Manumission! I only have a over-played copy of the Los Crudos split and would love to hear more.

Oh yeah. I have that split. I forgot about it… it’s one of those that I bought, but then only listened to once or so.

great split! you got me into unruh through this page and enewetak is a great beast. im always on the lookout for more enewetak.

Tim: I have the Jara 7”… and I think that’s all I have. But yeah, I’ll post it. I’ll try to do those two posts next week (plus the honeywell/reach out split for ricardo!).

Yeah, I figured Manumission would be easy to find online. But then I looked at the last.fm stats for the band, and it didn’t have many listens. So it must not be very available yet.

yes, please! A manumission link would be awesome! I have been looking for Manumission online for a long time- I sold all my records (and record player) a while back, so it would be awesome to hear those songs again. Another hard band to find is JARA. Can you lend a hand and do a post on that band as well? I would appreciate it!

Sweet! Thanks a lot. I’m so glad to finally hear this.

Yeah, Manumission is definitely a bit overlooked. I’ll get those three records up here and will include this link, and that’ll help give people a good look.

A Manumission post, go for it! That is one overlooked band, lots of online distros still carry the diego rivera and binary lung 7” for cheap .

I tried to rip the manumission songs from the crudos split,
http://www.mediafire.com/?2j2mktmly5l