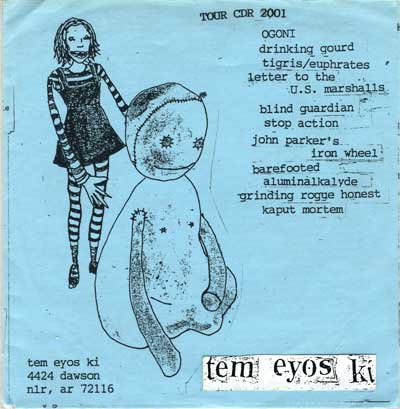 Here’s the Tem Eyos Ki Tour CD from 2001. I didn’t see them on this tour, but I got the CD. Maybe this is widely available — I dunno. It seemed like a small gem at the time. And it didn’t seem like they made very many.

They also toured in 2002, when their full length came out. And they stayed at my place while playing in Goleta. And I didn’t go to the show! How stupid is that? I still regret it. I was dating a girl who wasn’t really into loud hardcore, but I had played her this CD a few days before, and she liked it. She agreed, then, to go to the show. But then the night of she was like, I don’t really feel like going to a show tonight. And I said, um, oh, so what should we do? And so that was that… 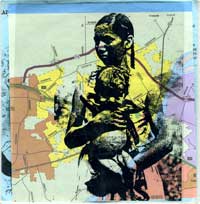 Nate Powell says this of them:

“The band, besides their blazing speed metal riffs and operatic Bruce Dickinsonesque wails, also symbolized a refreshed cooperative approach between the local punk and metal scenes, and a bold blend of pressing political and personal lyrical content. Tem Eyos Ki is my all-time favorite band.”

I haven’t heard the full length (the only other thing I have is the split 7″ with 100 Years War (sorry I messed that up the first time I typed this)), so I don’t know if there are any repeats. No idea why I never got that, considering how much I like this CD. Members of Soophie Nun Squad, and so on. From North Little Rock, Arkansas. Zip contains pdf with entire insert. Harlan Records for more info about them.

Singer Maralie has a nice site with art, and music from her current project, Honeybeast.

http://coffeeandcompany.blogspot.com/2009/03/tem-eyos-ki.html this site has all their stuff, you have to DL song by song, but it is worth it!

Krustie, was that song only on a comp? or was it elsewhere, too? I don’t have that comp. But I picked up their lp not too long ago. haven’t really look at it yet, though.

A question, somebody have “Tem Eyos Ki - All the Days Are Numbered So” this are a compilated from Harlan recs.

ive been looking for an XL t shirt of theirs but i bet its a futile search……….

Anyone have the self titled they can up?

Sapila, check the Harlan Records link in this post. That lists it all.

What else do they have put out?

neat. i have everything they’ve put out except that tour cd, what a gem.

Dude, fucking epic Thank you so much for this, been looking for a Tem Ki Eyos album for the past six months and this was my first actual find of anything of theirs.

Sorry about your loss, Alix (and I mean that beyond just your records).

do you have the track names for the split with houndred years war? i lost all my vinyl jackets in katrina and am now going through trying to label things. i can’t find the tracklist anywhere on the net…thanks.

You have the Tem Eyos Ki/Hundred Years War split?

Excuse my english haha…I’m from Argentina.

Thanks!! Men,this blog is the best!!