The end is so nye

Spending a great part of the last year with gold miners, our conversations would often veer into the realm of what we’re planning to do “when things go bad.” Miners were invariably stashing gold. Because gold, after all, while on a practical level quite useless, is an international currency and has for centuries been understood by various civilizations to possess some sort of mystical powers. Of course, will international currencies still be useful post-guitarmadeddon? I don’t know, and I didn’t ask. But certainly, there are more than a few ways to prepare for whatever hardships may or may not come, and a little gold on hand could be helpful for bartering with someone who’s traversing the harsh post-apocalyptic landscape, looking to trade, say, his bowie knife for a new filling.

What also will probably definitely come in handy in the future? Guns and bullets. Also, grappling hooks.

In a class I once took, titled, “Sociology 186S: Symbolic Interaction,” we read a book, titled, “Dancing at Armageddon: Survivalism and Chaos in Modern Times,”

documenting the authors many years researching, in a fashion most ethnographic, the North American survivalist subculture.

Richard Mitchell embedded himself in the subculture, becoming one of them while at the same time staying transparent about his research (to allay further paranoia). One of the striking conclusions was that these survivalists, while defining themselves by eschewing consumerism and dreaming of a nice missile silo to use for homes, were still very much consumers and still identified themselves with a larger group. They bought and displayed their gadgets, had regular meetings, subscribed to newsletters and catalogs, went on outings where they fumbled around in the woods playing little war games (a quite amusing part of the book). Once comfortably settled, they then cast themselves out of society, and prepare themselves for the charred unknown by forming a new group of like-minded hunters; essentially, they needed a context for identifying themselves.

It’s interesting how the basic structures of societies — the relationships, the mores, the identification of a group and self-identification within the group — are still present in a subculture that defines itself by the ability to persist beyond the destruction of proper society. That didn’t come out right. Basically what I mean is that this group that seeks to “discover and reinterpret cultural assumptions, and then imaginatively reform the totality of social life,” so strongly relies on the intrinsic practices of social life in order to define itself. I don’t know. I think that’s funny. Or, at least, absurd. Ripe for the picking! And also, while society as we see it now persists, there’s hardly a distinction between these survivalists and the rest of the living. But maybe that’ll change in the dark, hopefully teleporting, future, when things go bad and they’re all in charge. Except I bet I could figure out a way to disarm them. One thing that often works is just to repeat back to them what they said to you, over and over, until they become so frustrated that you can let loose a banshee scream and easily disarm them of their weapon or gold or whatever. 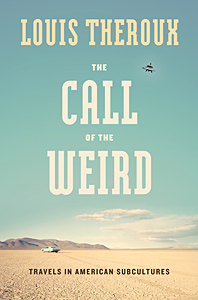 I read a new book recently that recalled to my mind Mitchell’s chronicles. The “Call of the Weird: Travels in American Subcultures”

, by Louis Theroux, follows the author as he reunites with his subjects from his previous BBC series. While not all the subjects are survivalists, most of them are in the subcultural fringes — prostitutes, Heaven’s Gate folks, UFO enthusiasts — and, notably, they still possess in themselves the same survivalistic notion, as noted by Mitchell, of death before ever profoundly questioning myself.

Unlike Mitchell, Theroux steps into his subject’s worlds just as he would step into a bar. In fact, one gets the impression he could just as easily be interviewing a barmate, sharing stories throughout the night over a couple bottles of wine. For Theroux’s part there is a benefit to coming into these situations as an indefatigable character; to not allow the subjects to become too lazy with their platitudes. Theroux, like any reasonable person, is a skeptic. He delights in diving deep in these people’s worlds. But, in most of the chapters, he eventually becomes weary of them. He discovers, time and again, that for these people to sustain their personalities and sense of self, they cannot come up for air. To do so would be to question their entire investment in their lives. And they can’t afford that. They spend a lot time telling themselves they are right and happy in their lives, and why being a big fat racist (for instance) is the one and only way to feel that way.

For me, of the most interesting parts about this book is that these personalities, while seemingly on the fringe, are not all hidden in bunkers in the woods in Idaho (not like Mitchell’s folks are either; those people tended to live split lives). Gangster rappers, white supremacist pubescent folk singers, Ike Turner — all it takes to become one is total devotion to the cause. Total devotion to building a strong, well-defined identity. And if you screw up along the way, well, you didn’t screw up. Somebody else did. It’s their fault, not yours.

Max Weber, as noted by Mitchell, asked, “amid the pervasive disenchantment of rational society, the ‘shell of bondage,’ the ‘basic fact’ of the ‘irresistible advance of bureaucratization,’ ‘how can one possibly save any remnants of individualist freedom of any sense?’” We worry, Mitchell notes, that commodification is invading even the essential cores of ourselves — all the way to our emotions and feelings. What more defiant way to seem like your own person, like your self is not completely submerged and controlled by these omnipresent institutions, than by becoming a self-deluding radical?