“National Bingo Night” is a high-energy, truly interactive game of luck based on the popular American pastime. Three games of fast-paced, high stakes Bingo are played each night with the viewing public invited to join along.

In each of three games, viewers can print their own Bingo cards from ABC.com and mark off the numbers as they’re called, so they’ll not only experience the excitement of watching the on-screen competition but can concurrently enjoy the pure fun of playing bingo at home, free of charge, for an opportunity to cash in. 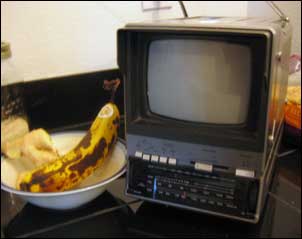 This is cool. And I will be on it. I might need to buy a printer first. And I’m not sure yet if our kitchen-tv gets this channel. But I’ll figure something out. Who’s on this with me? (You don’t have to live in the same town as me to join in on the fun. We’re all on the grid with this one. Just know that when you’re laughing with delight at the silliness of your own mis-daubed number–whoops!–or gripping the edge of your chair’s arm while staring greedily at the last remaining number on your card, or jumping up and screaming Bingo! and then quickly realizing you made a mistake and now need to sit back down and be embarrassed, I’ll be right there, from the comfort of my own home, doing the exact same thing.) 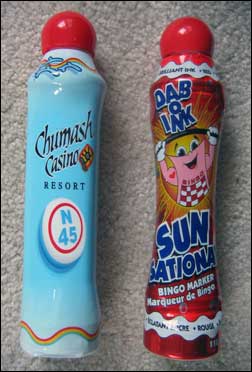 In a way, bingo’s just a game of chance. When particpating the matter of winning is mostly just a matter of correctly marking your card. But (t)here are a few tips that can help advance your chances at winning. I’ve played a lot of bingo, and I’ve absorbed some of these tips. The first and most obvious thing is to own many daubers — preferably, many lucky daubers. I own two daubers, neither of which are especially lucky. They are red, and they come from a Chumash Casino in Santa Ynez. Personally I like blue ones better. I don’t know how I ended up with two reds. But sometimes it bums me out. I feel like I’ll never win with these two. I shouldn’t let this get me down so much, because I’m sure that positive thinking is probably another factor that leads to big wins, but I just can’t help it.

Another variable that can be utilized in order to elevate oneself toward smart play is lucky figurines! or gizmos or statues or anything! They just have to be small, lucky, and able to stand up on their own. This image if of my luckiest gizmo. 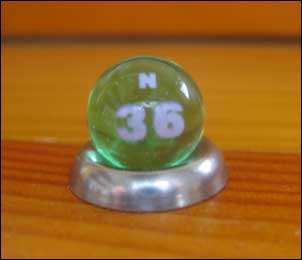 I purchased it from a traveling marble salesman. He told me it was lucky. I noted to him that N36 was one of my favorite numbers, and in response he shared a story about how that’s the number he once won $300 on. I’ll take it. It came with a stand. The point, of course, is to place things like this lucky bingo marble in your area of play, thus increasing your luck. I bought two of these actually, and gave the other to my sweetheart. She promptly rejected me. No joke. (However, since then she’s told me that since then she’s used it when playing bingo. But it hasn’t brought her luck yet. Yeah, no crap. Personally I think she negated the luck of the marble by not recognizing a good thing when she had it.)

I haven’t had a chance to equip this marble during games of bingo. While, yes, I was playing bingo regularly throughout last year, I wasn’t close enough to an Indian Casino, and Elks Lodges and the like are too expensive, so I was just playing Safety Bingo at my work. The function of Safety Bingo is kind of confusing. Basically the pot starts at $50, and then for every day that there isn’t an accident of some type (like some one sprains their ankle, or hits their head, or tumbles down something, or doesn’t follow the rules when getting into tricky situations) the pot goes up a dollar. One number is called each day. I never once won Safety Bingo. Some of my close coworkers did. The money came in the form of a gift certificate.

Every day we would check the board in the main office to see if we got a number. It was fun. Pretty much every employee was into it. A little too into it, in fact.

And that’s where it gets more interesting (also where we completely forget that I am supposed to be listing more lucky tips). It’s a real bummer when some guy on the other side of work gets hurt and thus resets the prize money back to $50. Nobody wants that. So what to do? The thing to do is to not report injuries. So that’s exactly what people started doing. But it’s difficult to keep all that stuff from the administrators. People wear casts and bandages, they walk with limps. The info is going to leak to the top eventually.

And so, in a manner of true deviousness (or idiocy), when a person at my work would get injured while also being close to winning, they would hold out and wait to report the injury until after a Bingo! had been declared (hopefully by them).

As a result the work setting contained this vast conspiracy of injury cover-ups. This was a mental health facility, and so injuries always come with an incident report. So the reports had to be pro-actively altered to occur after the bingo. Needless to say this never actually worked. It’s not easy to fudge the dates on incident reports. The administrators got pissed at all the bingo pot manipulation, and the game started falling apart. It was still going on when I left, but they were only calling a few numbers a week.

The worst thing that came out of it was when my officemate won. The pot was listed at $145. She came in to collect her money, and was told about an unfolding web of lies. But the stat sheet still officially listed the pot at $145, and so it’s totally messed up to retroactively adjust it because of some injury from a week ago. Right? But that’s exactly what happened. Some folks that we had nothing to do with had been injured the week before. But the pot was so high that they didn’t want to ruin it for everyone. So they attempted to cover it up, but they were, after Ginny won, caught. Ginny went home with a $50 gift certificate to True Value Hardware.

I kept a picture of one of my nearly-winning Safety Bingo cards. 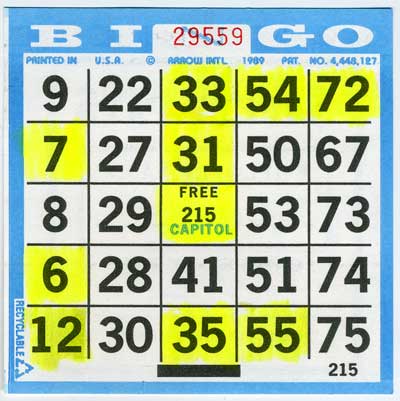 See you on National Bingo Night!

Theory and Analysis of Puddles

I missed it, Joe. I’m so lame. I’m going to print out some cards today, and then will work on getting the channel on our KitchenTV.

I was disappointed by the 15 minutes I watched. What did you think?

Did you equip your Fortuna’s Marble (+36 Luck)?