Blue Skies Above Us
Just here to have fun
Posts It retracts, and then OH MY GOD, it detracts!
Post
Cancel

It retracts, and then OH MY GOD, it detracts!

I’ve been meaning to continue with my Nitpicking Probably Not Notable Advertisements series (which might be less a series and more a tendency — but series sounds more serious — probably because of the shared seri — and seriousness is something I somewhat strive for), but for some time my intentions — my meanings, if you will — were repeatedly gorked into inactivity. Something was missing; some prime ingredient: Inspiration! Enter La-Z-Boy. 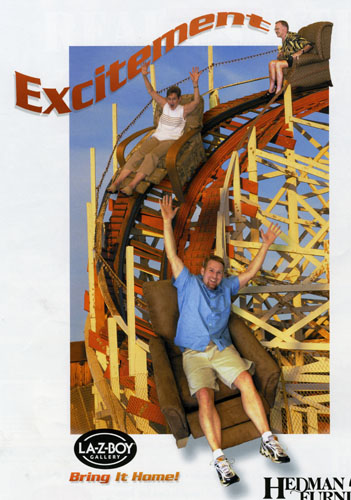 As a card carrying member of the literati, I’ve learned, painstakingly, that there are some activities, or rather lack of activities, that would result in the revocation of said card. The most obvious offense being: Not reading. Well, what if I don’t always have time to read? Or what if I might have the time but still don’t really want to do it? Yeah, well I spent like two hours making that card, and another 20 sneaking the laminator out of the lamination/copying room at work, and so I’m damn hell going to try as hard as I can to, that’s right, think of some cool ways to trick both the world and my own brain into believing that I’m a more-than-casual reader — that I’m a freaking member of the freaking literati!

One such trick I’ve devised is to pick up a magazine, or pamphlet, or newspaper, read the front cover completely, making sure to get a feel for what’s contained within, and then when I feel that’s been accomplished I immediately (and somewhat sneakily) flip it over and read the back cover. Blam, I’m done. Read the paper. See I’m reading the last page, so I’m done. And it works great. I mean, I don’t know how many other people pay attention to my magazine reading habits, but at least I know that I pay attention to them. And I know this tactic works on me.

In this case, where the above advertisement is concerned, the magazine was the “Official Fair Guide” for the Nevada County Fair. Slogan: “Wild About Ewe!”. Basically, I read that slogan, felt that it alone supplied me with the gist of the guide, and so flipped it straight over to the back page. I was immediately confronted with an absolute paradox, the scope of which exceeds this humble webpage, and so I’ll just focus my attention on the most positively innocuous points. It’s safe to say that this advertisement gorked (that word works both ways) the critical portion of my mind out of dormancy and back into activity.

First of all: “Excitement”. Most chairs aren’t exciting. They’re boring. La-Z-Boy’s submitting that their chairs are of the exciting variety. What makes them so exciting? I don’t know. Maybe because they retract? Sure, everyone’s messed up the lever thing, pulled it too hard or whatever, and accidentally shot backward — backward half a foot, landing with their back on a comfy chair — but I have strong doubt that that specific, not-covered-in-the-manual, situation is what’s being deemed as exciting. I don’t think they’re saying any specific feature of the chair is exciting. I think they’re just setting a tone for the advertisement. Here “Excitement” is synonymous with “Not totally scary!” or maybe, “Not sure death, in case you were thinking it might be!”

Then there’s the picture. Starting with the entire thing: there’s a roller coaster, and it was photographed either at sunset or sunrise. Don’t bother adjusting the lighting on the riders, so as to make the situation even remotely believable. After all, it’s an exciting ride, not a death trap, and the only way for this ride to be exciting is for it to be totally fake-looking.

Bottom rider: obviously ecstatic about slipping off the track and rocketing over a picket fence, hands-free, to land on a cushion of couch in the parking lot below. But he’s happy! He’s ankle deep in the comfort zone. He’s now experienced everything that total comfort can be, and has nothing left to fear.

Middle rider: began the descent, quickly thought back to the instructions she received when stepping onto the ride, and so has initialized the retractable leg rest. The gam support has exceeded all expectations. She’s loving it.

Top rider: Adorned with the crazy-patterned shirt that I’m guessing is some sort of rite of passage with middle aged men, and must never be taken off at any point during the weekends, or else he’ll fall into a funk which only the prospect of the next weekend can obliterate, top rider is firmly gripping the arm rests, is impressed with their softness and stability, and has probably forgotten all about the Lean Back Principle that is key when attempting to experience the full power of the comfortable chair. Lean back, man! Your back will thank me later.

I wish they’d included a slogan in the ad. Perhaps: La-Z-Boy Chairs: Sitting On One Is Like Riding A Sick Rollercoaster! Or something to that effect, except with more zing.