I live by the codex

About a year ago I wrote to McSweeney’s and suggested that they reprint the woefully out of print and highly valued book, the Codex Seraphinianus, by Luigi Serafini. 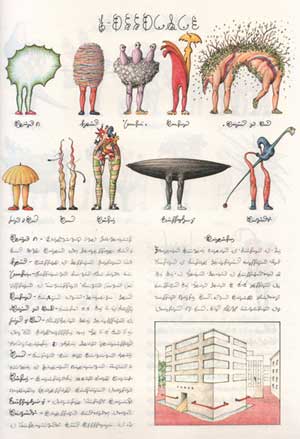 Since it is colorful and odd and way too unavailable, I figured there was a chance McSweeney’s would be into reprinting it. Somehow I was under the impression that McSweeney’s occasionally resurrects forgotten tomes. Maybe they do. Or maybe those resources are devoted toward resurrecting forgotten sprawling-comedic novels written a hundred years ago. At any rate, they replied to me and said that at the moment they were more interested in publishing new work.

The university arts library where I was working about three years ago had a copy in their special collections. But for the first two years I worked there I had no knowledge of its existence (arts speccol was a densely-packed caged-off section — to illustrate the density: I’d been back there countless times, aimlessly browsing, and it wasn’t until a couple days before I quit that I noticed we carried the catalogue raisonne for Jean Dubuffet, one of my favorite artists). Then a friend, when filling out a personal survey of some sort on his blog, listed the Codex as his most prized book in his personal collection. So I searched and discovered a copy. The copy has never circulated, and looked untouched. It’s the first american edition, from 1983. I would often open it up and marvel at the art and look for patterns in the made-up language. The only copies I could find at the time were through ABEbooks, and they ranged between $150 and $400 (actually I think ebay would sometimes have one or two, at about the same price). I wanted a copy, and I wanted other people to have copies, and I didn’t want to have to search used bookstores for years, and spend too much of my time frequently visiting bookseller sites, thus the letter, etc.

Now there certainly will be some more people searching for this book. When I received the May issue of The Believer and saw a featured article about the Codex, my first thought, because I’m really self-centered, was that the person I had sent the letter to looked up the book, saw that it was great, and then put together the article that I should have considered writing. Of course, then I actually read the article and discovered he has a much more interesting and intimate relationship with the book than I, and that he can write much more about it than I possibly can. It’s an enjoyable article. I’m not sure I understand the author, Justin Taylor’s, reaction to Calvino’s insights about the book. It doesn’t seem to me that Calvino is spoiling a potentially unadulterated experience of the book by analyzing its import and significance, as Taylor notes. I think the nature of the Codex — it’s impenetrability in parts and openness for interpretation in other parts — keeps it safely always surprising and engaging.

As Shelley Jackson states in the article:

“It’s never going to completely yield to you in the sense of giving you insight into the artist’s intentions, so it kind of reverts you back on yourself and makes you notice what you’re noticing and notice the associations that you make. It’s a kind of springboard for your own creative musings.”

“You could keep formulating theories ad infinitum,” Jackson said, “without them resolving into anything, or without them reaching closure, at least, which is frankly the most interesting thing about it.”

I’m glad more people now know about the book. It’s unfortunate that more won’t be able to familiarize themselves with it. It’s still out of print, and the value, it seems, has gone up.

I’m additionally glad to say that rather than having to scour through all the different bookseller sites, there’s now a neat website called BooksPrice.com that aggregates listings from all the major online booksellers (and dvd, cd, games). It’s sort of the kayak.com of books. The site provides a simple way to check how many are available (and the site keeps tabs on previous searches, and has an rss search feed), and for how much. For the Codex: A decent amount. And all at crazy high prices. Boo. I don’t know if I’ll ever get my hands on a copy. And now there’s hardly an excuse for sellers not to be aware of its value.

There’s a contemporary artist whose style and mind reminds me a bit of Serafini. Theo Ellsworth, comicmaker and illustrator, is gifted at creating worlds composed of known objects, rules of physics, and animal behavior that have been deconstructed and then refashioned into new fantastical beasts and scenes. I imagine his worlds as populated by figures evolved from the flash-melding of one another in a dream or cosmic rift; flowing perfectly, sensible but absurd.

For an animated depiction of an elaborate nature display from a fantastic other world, try to check out Mars and Beyond, the Disney short from the late ’60s.