Here’s another dungeons and dragons recap

Here’s another dungeons and dragons recap. We had a sesh last night. So I’ll have a new one up soon.

So, Lugoj’s minions defeated and the loot obtained, you regrouped. It had been weeks since you’d seen your beloved pal Twinkle. So there was much catching up. He had been searching for the Harp of Ages, and had come so close to finding it in Riverbend. But he’d arrived onto the scene too late – the harp had been plundered by mysterious thieves. Some folks, like this dunce kid with a gift for healing named Cecil, believed the plunderers to be followers of Count Strahd, from Castle Ravenloft. But others – like, everyone else in the village – think Cecil done got some head problems up in his melon, and that he wouldn’t know the Mark of Strahd from the Skidmark of Mal’Kalehbror. Only time will tell – because Twinkle unofficially adopted Cecil, and is using Cecil’s giant, malformed nose to stick to the scent.

You all trudged off toward Gormley’s Grove. While traveling, Zara taught her owl Otho how to fetch. What a smart owl!

Upon coming upon a giant’s old fork sticking out of the ground, you took a left. You caught sight of the grove. It looked large, and darkish. But a big ray of light broke through the clouds and shined into some middle area of the grove. Clouds of pollen were seen flowing out of the forest and into the evening sky. When you reached the border of the grove, you camped for the night.

At daybreak, you awoke. You entered the forest darkly, and saw the path meandering through the woods. The way was lit by will-o-wisps, but you paid them no heed. Zara shadowed the path from a few feet off of it. Johanna did the same (on the other side of the path), but while hiding and moving silently. She soon stumbled upon a gnarly tree. The group came over. You all talked to it for a while, but it did not talk back. It was not a treant. You noticed some shrooms at the base. Zara talked Baldwin into eating one of them. After eating one, he superpowered up and became larger, stronger, faster, and he had ultravision. He was more vulnerable, though, because he removed his armor as he grew in size. With his psychedelic vision, he spotted in the tree a nest. Zara attempted to get Otho to check out the contents, but all he brought down was a twig. Johanna was not convinced that the nest only contained twigs. So she climbed up to check it out. She discovered that the nest contained bright green acorns. Most unusual! She threw one down to Cecil, and Cecil failed to catch it. It hit the ground and exploded. Acorn grenades! (DM’s note: this should have actually blown Cecil’s hand off… but I wussed out.) At this point – correct me if I am wrong – Johanna bagged all the acorns, and told everyone that there weren’t any more… I feel like I am getting this wrong. Like, I thought she failed her bluff check.

At any rate, you got back on the path and continued onward. You encountered a mama bear eating honey, with two cubs nearby, playing in a stream. Wisely, you choose not to disrupt them. You went around. Next, you came across a fork in the path, with a foot bridge to the left and a pond nearby. The pond contained no magic. And beyond the foot bridge you spotted a bright spot in the woods. Reckoning it to be Gormley’s spot, you went thataway.

The light was casting down through an opening in the trees. The spot was grassy, and there were some fruit trees. And, there was Gormley the Treant! Zara stepped forth and plead her case. She offered him a deer tchotchke in exchange for his finger. He was intrigued, but soon revealed that he needed not fake animals… but real animals. He asked her to bring him a squirrel or two… actually, here’s Gormley’s dialog for this part:

“Honestly, I yearn for more companionship. It’s been a while since I felt the activity of freshly-hatched chicklets nesting in my neckbeard, heard their chirpings as they said, in their bird-language, ‘feed me!’ Felt a squirrel burrowing a hole in my side, building a fine house in me, raising a family in it.” He sighs, longingly. “Can you help me get that? Can you, like, convince a squirrel to chill on my trunk for a time? Can you build me a sweet bird house that I can hang from my bow?” “Alas,” He continues, sighing humongously, “Doing that would not be enough. This is, unfortunately, a tainted grove. I fear I have an idea of why the plants are so uneasy; why they shed their pollen with such gusto, choking this grove, making the ground all mushy and gross in places. The trees, the animals – they are unhappy here. And I think it is my fault. You see, I once had all the companionship I could ever ask for. And at that time this place flourished. I yearned not for squirrels and birds and the like. Flowers bloomed beautifully, birds sang sweetly, animals mated robustly. The grove was in a state of harmony. Her name was Bluhilda, and she was my wife…” A wad of sap runs down from his eye. “To make a long story short, she was, at times, super critical of me – trim your neckbeard, stop picking those nugs, drink more water, it’s good for you, etc and so on. And then finally one day I was like, enough already. Just love me for who I am! Why do I need to change these things for you; it’s not like you’re perfect! And so on. And she got angry. Her glare would have petrified balsa wood. In her anger at me for saying this, she stormed off. But it was a foul night, that night, and evil had encroached into the grove, lurking on the outskirts – Evil Badgers! As she approached the rim of the grove, intending to do a lap or two around it in order to work out her rage, she was, let’s say, occupied by these dire beasts. They burrowed into her, and they won’t come out! These badgers are horrid creatures – they’ve weakened her so. They stripped off many of her branches, and used them and others from the forest outskirts to build a protective wall around her. And they’ve had her trapped ever since. My attempts at ridding them have failed. So, please, if you can, defeat those evil badgers. Reunite me with my woman! Restore the balance of Gormley Grove. Then I would be down with awarding you the Staff of Nugpick, and then may it serve you well.” “To help you on your journey, I’ll give you this. A little while ago a strange ranger visited me and, while here, surveyed the grove. I can’t say it’s the best representation of the grove (he was more enthusiastic than competent), but anyway, here it the map he made.” His branchy arm drops down, and with the Staff of Nugpick he picks a piece of bark off of his trunk. He drops it at the base of his trunk. 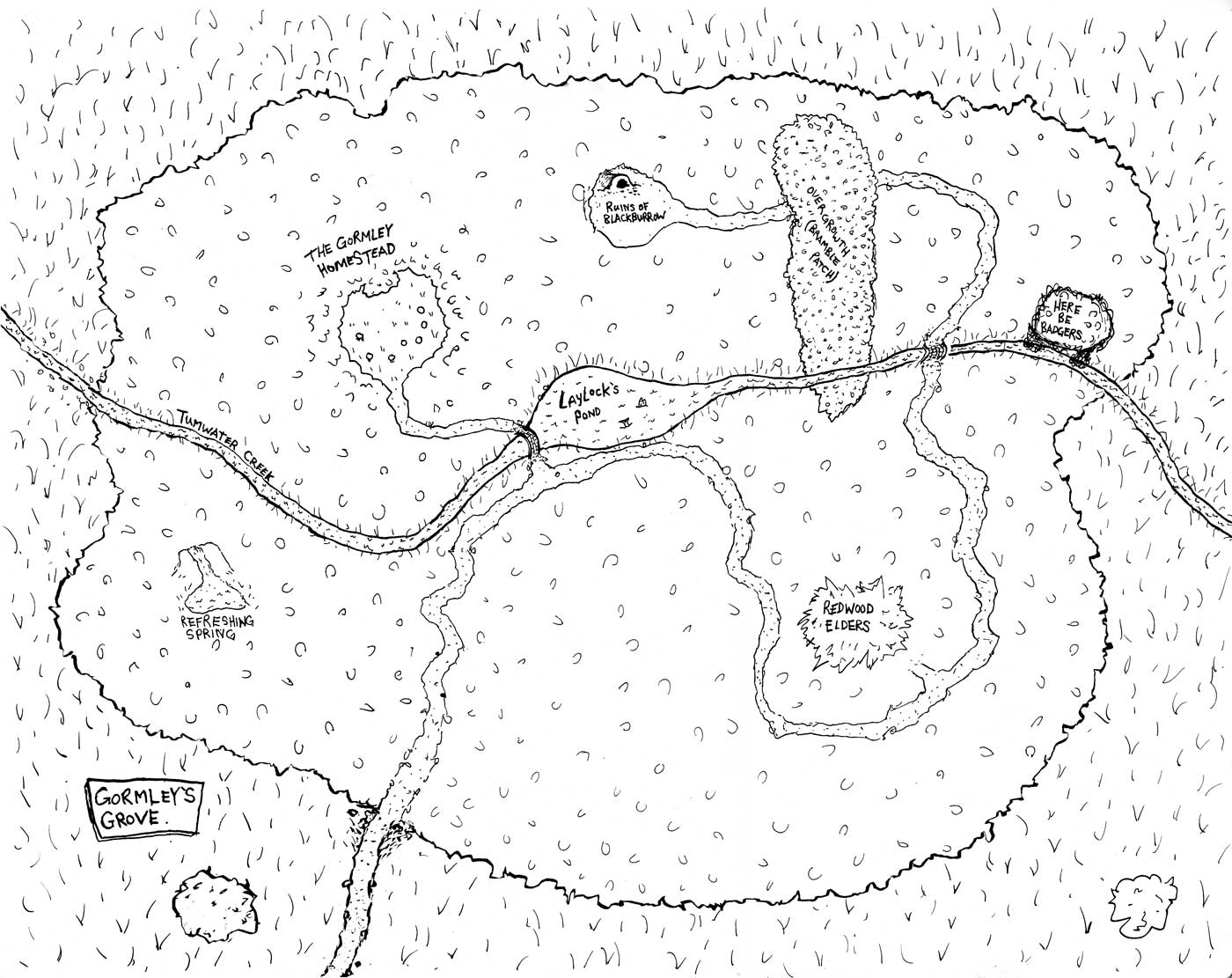 So, Zara, and everyone else (even JoeMar, who fell asleep during this), agrees that this is a-ok.

But also, I should mention that Twinkle has expressed a profound hatred of treants. He hates them, and he’s very open about it.

Finally, you make it to the area with the dire badgers. The badgers – I forgot to mention – had been trained by beavers! And that’s why they, like, built a damn. ahem. You approached. And then Twinkle loudly said something about how treants are stupid. This awoke the (unbeknownst to you) sleeping badgers. They were within the wall, but as Twinkle went in for a closer look, a third badgers pounced on him from behind and attacked!

Thus, a fight started. You killed the one outside, and you rammed into the wall a bunch and broke a hole in it. Johanna lit the wall on fire with an acorn grenade. And this is where we stopped. Until next time!