The king of all rom hackers?

I very much enjoyed the “Visual Issue” of The Believer, and totally want to subscribe to Wholphin. But I can’t afford such luxuries. (edit: I got a job, so I can afford it now)

Caitlin Jones’ article on the state of net art was interesting. At my previous job at an arts library I would frequently be exposed to loads of neat net-art resources (from new books and magazines). I always found this bursting belly of the net to be astounding. It was loaded with interesting and completely obscure projects, with links to vast collectives of artists, and with enough content to browse for weeks (though my work computer didn’t have sound and the headphone jack was broken — so that sort of inhibited the amount of things I could check out).

I’m not going to question the artistic value of Cory Arcangel’s work, and I wouldn’t mind having his latest poster of a screenshot from a hacked version of F1 Racer, but I do have issue with the narrowness of Jones’s, and other art worlder’s, perspectives, who act like hacking roms started with Arcangel in 2003. 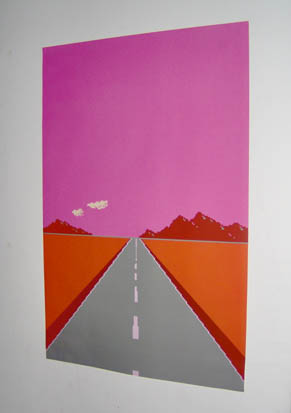 He definitely did a better job hacking them than most people (see this post of mine documenting a few hacks), and he marketed himself well. But his work is nothing new. The Carbon Defense League began hacking Game Boy games back in 1998. And while they did it with specific ends in mind, it was still art! Also, I have a folder on my computer with 1,200 hacked games in it. This practice is widespread. I realize that Jones and others (like my sister) who deem his work groundbreaking and new might know that he’s not the first, and think (reasonably) that it’s more important that he was the first to place it within a more standard and accessible world (on a wall in a gallery). But in way, that’s exactly what Jones argues (most) net artists don’t care so much about — the traditional artworld setting is undermined and rejected by net-artists. They don’t need galleries to display their work and gain validity.

But, as it was with photography and video art before it, net-art has been fairly successfully incorporated into the high art world. Even Jones and other critics and people who are less entrenched within the institutional art world have trouble recognizing all aspects of net-art until it’s been redistributed into more acceptible terms. It’s not yet art until someone emerges declaring their work to be art! On that note:

If I’m only somewhat sick of hearing about Arcangel’s Super Mario Cloud hack, then I’m definitely sick of hearing about Natacha Merritt – the digital girly (looks like her site is undergoing work at the moment — I can’t get it to load properly). Yes, I guess her work was pretty outstanding a few years ago, when voyeuristic web cam girls weren’t all over the place. Our library carried her book. But please, no matter how you repackage it, it’s only a girl taking pixelated photos of herself both while naked and alone in bed, and while naked with people in bed. This is nothing new anymore, and it doesn’t deserve any attention. “This is not pornography; this is sexuality,” says Eric Fischl in his article in the same issue. Big deal, there’s thousands of pages of not-pornographic sexuality all over the internet. But this artist is one of the few to market herself so well that she gets her own art book (filled with jpgs from her website), and so well that she still receives mention, even years after her gimick became flooded and stale. I now question whether some of these other artists mentioned in Fischl’s article are there because he simply remembers their name from four years ago, and remembers them having something to do with art that was once considered in vogue. Perhaps he’s acquainted with them, and felt bad that people had begun to turn away. I’m hoping the newest incarnation of her website provides more variance to the bored-with-webcam genre of the net.

Lost a limb, gained a weapon

I have my aspirations.