I registered a complaint to The New Yorker a few weeks ago regarding their unwillingess to tamper with the Caption Contest votes. For a while there I was correctly guessing all the winners based on how obvious they were and how high they ranked on the I’ll-vote-for-this-because-I-want-laugh-with-a-staff-member scale. The winners were often not the most witty, and not the most, um, longevous in their hilarity. They were just the easiest and most immediately relatable. I proposed that staff members’ votes should count for “like 500” votes.

For lack of better things to post, that letter is now an “open” one.

Can’t you occasionally lift the democratic process from its mistaken state and, say, multiply the strength of your own votes by like 500? I, for one, value your ability to discern the greater humor over that same ability within your readership (me included, except not in this specific case). Us readers are fickle. Some times what we register as the greater humor is really a reaction toward an injurious illusion, a mere spectacle of access; we jump too quickly at an opportunity to tumble around with you — editors and office boys alike — in laughter. Democracry fails when we make such mistakes.

Not since the X-Files movie, with its exposure of FEMA as a government abbreviation that might harbor the potential for complaint, have we cared so much about referencing it as an agent of our disgust. And then a caption choice comes along which, by the simple virtue of it containing capitalized letters parallel to those in the headlines, appears to elect itself as the right decision. “FEMA, ha! That’s brilliant.” And thus the votes were submitted.

Unfortunately the rest of the words in the caption were not at all funny. But we forgave that detail, and in doing so the pure, uncut democracy that I love was sliced down into ill-informed, and ill-intentioned, cutlets. I feared this would happen, and I hoped that as the impending results became apparent you would have added some weight to your own votes and tilted the declaration of Greater Humor to the deserving caption (and I would only hope for such intervention during such times of clear mistake). If I had a million votes (or if I worked for the magazine) I would have possibly aimed my nod at the caption in which the man expressed a need for the larger paper weights. While not being as blandly poignant as the “winner”, it was, and in my mind always will be, an absurd and quite hilarious remark. With it as the winner there would indeed have been a momentary sense of loss — hey, what happened to FEMA? — but it would prove transitory as we re-read the winner and our bellies filled, and then rolled, with laughter. Are staff and the families of even allowed to vote? I hope so.

I haven’t heard back. But there’s a chance they took my advice, as I haven’t been able to correctly guess the winner for two weeks now. Please, leave my logic alone. (Note, this post was prompted by The MF, The ML pumping out two magnificent captions in a row. Read and laugh).

So I’m going to start my own contest (not really).

Here’s a caption-less cartoon I drew. I drew this a while ago, but I was never able to settle on the best wording for a caption. It’s a little bland – I should perhaps make him standing on top of a beaten and bloody person. 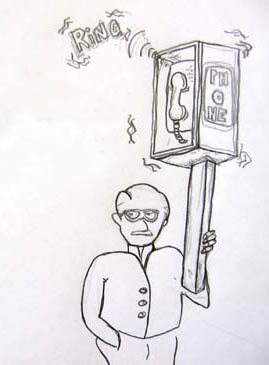 Submit any submissions to the comment section, or to email (found at the bottom of the page (and I’m only pointing to email in the great chance that no one posts a comment – so that we can all just assume the submissions are flooding to a hidden place)).

It probably wouldn’t be too hard to draw little pictures and then make you guys do the hard part. Let’s give it a try. I’ll be moving next week, so it’ll start once I’m settled.

I like it, Kevin. That’s much better than what I came up with.

Thanks for playing. You’re in the lead!

“A guy holding a pay phone in his left hand”

I love caption contests. It would be sweet if you did it on a regular basis. Jeff would participate, and I’d link to it on my site, so you can get my other two readers. We used to have a weekly caption contest in 6th grade, and one week we had a picture of some penguins screwing around. I wrote a caption about C & R Clothiers — I’m not sure if they’re around anymore — to make a tuxedo joke. I don’t remember the exact words, but it was pretty clever for a 6th grader. But when they read off the captions to vote, they read “C and R” like “candar,” and no one got it. I didn’t want to explain it at that point because everyone thought it was a really stupid caption.

↪︎ Reply to Kevin
Founded 2005. Over the years I've posted writing, comics, ringtones, and stuff about maps, bikes, programming, pinball. And I had a robust music blog mostly about '90s hardcore punk (category = music).
Other comics